Check these reasons to take a cruise vacation on Royal Caribbean's Independence of the Seas along with ship stats and features.

Independence of the Seas has operated all around the world, with itineraries around both the Mediterranean, Canary Islands and Europe, and the Caribbean and North America.

The ship is on the larger side, costing Royal Caribbean $828 million to build. The ship accommodates 4,370 passengers and 1,360 crew members over 15 passenger decks and four crew decks, with a gross tonnage of 155,889 GT and a length of 338.95 meters. When the ship launched alongside Freedom of the Seas and Liberty of the Seas, they were the largest cruise ships and passenger vessels built to date.

1. As we said, this ship is pretty modern, though it’s reached its preteen years

Royal Caribbean’s Independence of the Seas may be 12 years old, but that hardly makes it outdated. The ship underwent an extensive dry dock in 2018, just two years ago, which brought new features and amenities to the ship.

Additions included not only new and upgraded staterooms for cruisers, but also an escape room, laser tag arena, new water slides (with the favorited Tidal Wave slide, that propels riders up a vertical wall, for free falls and big thrills) and even the first trampoline park at sea — though the trampoline, dubbed SkyPad is much more than just a regular trampoline; it’s a VR experience.

Otherwise, though, Independence of the Seas was already outfitted with a lot of great features for its time, including an interactive water park, whirlpools that extended out over the ship’s sides, a two-story theater, ice skating rink, conference center, rock climbing wall, football court, FlowRider and more — all features that were absolutely groundbreaking for their time and that are still in demand today!

2. Independence of the Seas is incredibly family-friendly

Families are sure to love an Independence of the Seas cruise. After all, the cruise ship has been called the favorite family ship in the United Kingdom for quite a while. A lot of the new amenities and features, as you could probably tell, definitely appeal to kids of all ages, as well as parents, and beyond that, the ship is constantly offering activities and programming to keep kids, from toddlers to teens, entertained.

So, no matter how much time you actually want to spend as a family while on your cruise, you’ll be able to easily find your perfect balance of togetherness, bonding and alone time while aboard your Independence of the Seas cruise.

3. Of course, solo adult travelers and couples also love Independence of the Seas — and for good reason

While an Independence of the Seas cruise is incredibly family-friendly, that doesn’t mean that solo adult travelers and couples of all ages won’t have an equally good time. While there’s plenty for the kids to enjoy, there’s just as much, if not more, for the adults.

Great restaurants will appeal to foodies. A huge number of bars and lounges will keep the drinks flowing. A casino is classic adults-only fun, as are the late-night, rowdier comedy shows meant for adults. The Solarium space is, of course, Royal Caribbean’s adults-only outdoor feature. There are also adult-centric spots such as the spa and fitness center, if you want to focus on your wellness while you’re away.

4. A Royal Caribbean Independence of the Seas cruise is a great value for your money

If you’re looking to get the most value for your dollar while on a cruise, Independence of the Seas is for you. Your fare comes with a lot of inclusions that will make cruising not only more fun, but also a lot more budget-friendly. With your cruise fare, you get your meals in the main dining rooms, at the buffet, at the pizzeria and at the cafe, as well as select room service.

You enjoy access to all theater shows and most activities, such as ice skating. You’ll enjoy all the outdoor sports entertainment, kids programming and access to the fitness center. Additionally, depending on where you booked your cruise, you might also have your gratuity included in the price of your fare.

While there’s certainly nothing wrong with the dining you get within your fare, you may want to spring for some of the for-a-fee dining options. Your tummy definitely won’t regret the choice.

Worth Reading: 11 Best Things to Do on Royal Caribbean’s Navigator of the Seas

6. The theatrical shows are absolutely an experience to remember

Royal Caribbean most recently added the classic musical “Grease” to its line-up of theater shows and the cruise line’s take on this family favorite is truly a sight to behold. The show mixes theater numbers, song and dance with digital clips from the famous movie starring Olivia Newton John and John Travolta.

Royal Caribbean strives to hire a top-notch theatrical cast and it shows. The talent is there, along with high-quality, modern sets and stage management.

7. You don’t have to enjoy musical theater in order to find entertainment

We get it. Some people just don’t enjoy musical theater. While that might be your only choice of entertainment on some cruise ships, that’s not the case on a Royal Caribbean Independence of the Seas cruise.

Beyond the cruise line’s showing of “Grease,” you’ll find other entertainment such as game shows, karaoke, ice skating performances and more. Don’t miss the daily entertainment fun, ranging from bingo games to art auctions, film showings to dance classes, wine tastings to trivia. You’ll want to keep an eye on the cruise schedule so you don’t miss out on any fun activity!

If your idea of going on a cruise includes plenty of partying at every turn, you won’t be disappointed when you embark on an Independence of the Seas cruise. The ship hosts nightly parties, all with a fun vibe that incorporates costumes, dancing, music and singing.

Definitely join in on the fun — the staff isn’t about to let anyone ruin the good mood. Nightly parties boast themes, and usually include parades, for a street fest feel. White Parties also take place on some cruises. Certain parties are more kid-friendly than others, such as the DreamWorks character parade and party.

Along those same lines, if you need a little fuel for your party, you certainly won’t be lacking for a choice in watering holes. There are tons of bars and lounges on this ship, and Royal Caribbean offers a variety of drink packages, so you can pick the best option for you (you’re also allowed to bring two bottles of your own wine aboard, if you so wish).

Bar and lounge options include Playmaker’s Sports Bar, for craft beers and cocktails in a sports bar setting; Schooner Bar, for nautical theming, piano music and trivia; Bolero’s, for Latin flair, Latin music, Latin dancing and Latin drinks; Star Lounge, for more similar activities to what you’ll find in Schooner Bar; Ale & Anchor Pub, a British pub with beer and live tunes; Vintages, a wine bar with a cozy and comfy atmosphere, as well as outdoor seating; Champagne Bar, on the Royal Promenade; Plaza Bar, serving Windjammer buffet guests; the two pool bars; Olive or Twist, a martini bar with late-night dancing; the Viking Crown Lounge for amazing views thanks to the floor-to-ceiling windows at the front of the ship; and two bars open only to VIP passengers.

See what we mean? You will never be thirsty while you’re aboard a Royal Caribbean Independence of the Seas cruise. It’s just not possible! No matter the time of day, you can always find a little tipple to whet your whistle.

10. There are plenty of spots to catch some rays

If you are determined to come back from your cruise with an enviable tan, then you’ll find lots of spots aboard Independence of the Seas to catch those rays. The pool deck has three different zones. There’s the main pool with its whirlpools, the hub of all the activity and where you’re most likely to find some rambunctious kiddos; the water park-style area with its two water slides and FlowRider surf simulator; and the Solarium, the adults-only area with two whirlpools and a bar.

If you’re looking for a quieter, more relaxing setting in which to sunbathe, it’s the Solarium that you’re going to want to go to. Just note that the bar in the Solarium is only open during sea days, which is kind of a bummer.

11. All the little details are taken care of

You won’t be left wanting if you’re in need of some creature comforts while aboard your cruise, or if you suddenly discover that you left an important item at home. All the little details are taken care of by the excellent Royal Caribbean staff, so you can be assured that, no matter your request, it will be filled.

Need some WiFi to check your work email? An internet cafe is located adjacent to the ship’s small library, and it offers not only choices for purchasing WiFi, but also staff to help you troubleshoot any problems you might be having with connecting. WiFi starts for as little as $10 per device.

You can find any items you need in the promenade mall, where you can browse through not only essential items, but also luxury goods. A conference center will even let you get some team work done while at sea.

Also Read: 14 Things to Do on Royal Caribbean’s Mariner of the Seas

Independence of the Seas FAQ:

How many pools are on Independence of the Seas?

There are three pools aboard Royal Caribbean’s Independence of the Seas. The aqua park pool is more geared toward children and their family, with water park-style features. The main pool is open to all ages and is where you’ll find most activity occurring. The Solarium pool is only open to adults. There are also several whirlpools on the ship.

What class ship is Royal Caribbean’s Independence of the Seas?

Independence of the Seas is part of the trio of Freedom-class cruise ships, along with sister ships Freedom of the Seas and Liberty of the Seas. The Freedom class would precede Royal Caribbean’s larger Oasis class.

How large is the Independence of the Seas cruise ship?

The ship accommodates 4,370 passengers and 1,360 crew members over 15 passenger decks and four crew decks, with a gross tonnage of 155,889 GT and a length of 338.95 meters. When the ship launched alongside Freedom of the Seas and Liberty of the Seas, they were the largest cruise ships and passenger vessels built to date. 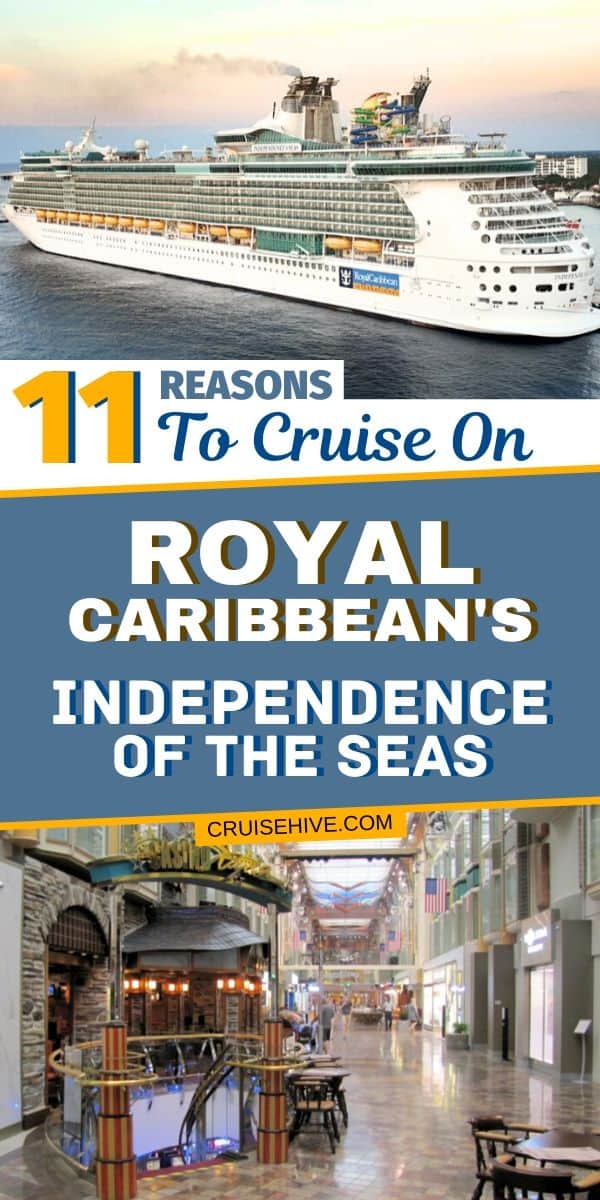