Here are 9 reasons why you should take a vacation on Royal Caribbean's Anthem of the Seas cruise ship part of the Quantum-class ships.

Anthem of the Seas followed Quantum of the Seas and was launched in 2015 and built in Germany to the tune of $940 million. Anthem of the Seas spent its inaugural season in Europe, sailing from Southampton to the Mediterranean, Canary Islands and Northern Europe.

In 2015, the ship moved on to the Caribbean and Bahamas, serving the region from New Jersey. The next year, Anthem of the Seas moved on to also serve routes to Bermuda, Canada and New England.

At that time, Anthem of the Seas was the largest ship to ever cruise through and around Canada. Anthem of the Seas is 1,139 feet long, with 18 decks (16 open to passengers) and a gross tonnage of 168,666 GT. The ship can hold up to 4,905 passengers, though typical occupancy hovers around 4,180 passengers. There are 2,090 passenger cabins.

Later this year, Anthem of the Seas is expected to return to Southampton for the summer season, making a return trip back to New Jersey in late 2020.

Anthem of the Seas has been lauded for its many entertainment options, including several which are unique for cruise ships — or at least which were unique and state-of-the-art at the time of the ship’s unveiling. These include a Wave Loch Flowrider surfing simulator, a rock-climbing wall and a skydiving simulator. Of course, the ship also boasts all the normal entertainment options that avid cruisers are used to seeing, including a theater and casino and plenty of water features.

The only poor media attention Royal Caribbean’s Anthem of the Seas has seen, has been some footage of storm damage that occurred during 2016. At that time, during a sailing between New Jersey and Florida, the ship was struck by heavy winds and waves and passengers experienced overturned furniture, damage to the ship and a partially collapsed ceiling. However, passengers were more or less fine, with only a few minor injuries, and received a refund and credit toward future cruises.

1. Anthem of the Seas offers a large sports and entertainment complex at sea

If it’s entertainment that you want above all else while on your next cruise, then you can look no further. Royal Caribbean’s Anthem of the Seas offers fun in spades, thanks to its SeaPlex, one of the largest indoor active spaces at sea.

2. Dining options are extensive and flexible aboard Royal Caribbean’s Anthem of the Seas

You’ve gotta eat, so you might as well enjoy it. Anthem of the Seas makes it easy for you to enjoy top-tier culinary experiences out on the water, whether you’re sticking to the complimentary and included dining options or you’re splurging on something special.

Complimentary dining venues include the main dining room, which has actually been reimagined as five complementary spaces, including one main dining room space just for suite guests. The different venues are all themed differently and each offers a new menu every night, as well as guest favorites every night.

The five spaces include the American Icon Grill, for American road trip food; Chic, a glamorous and sophisticated dining venue; Silk, an Asian eatery; The Grande, a formal restaurant in the style of European ocean liners; and Coastal Kitchen, a Royal Suite Class-only eatery serving Mediterranean and California Coastal food.

Additionally, other complimentary options include the Windjammer Marketplace, the ship’s version of a buffet; The Cafe @ Two70, a light sandwich, salad and soup restaurant; and a food truck.

For those who want to upgrade their dining experience just a tad, options include Wonderland Imaginative Cuisine, for experimental dining; Jamie’s Italian, featuring a menu designed by celebrity chef Jamie Oliver; Michael’s Genuine Pub, a pub inspired by a James Beard award winning chef; a steakhouse; and a Japanese restaurant.

For some cruisers, the entire experience is one big party, so let the drinks flow! If you consider yourself to be in this camp, then you’ll be happy to know that Anthem of the Seas offers 10 different bars, all providing cruisers with new and unique experiences.

Bionic Bar is helmed by two robotic bartenders. The North Star Bar is an outdoor venue with craft cocktails and Champagne. The bar at Two70 serves up views alongside cocktails and nonalcoholic beverages. Other bars include music venues and classic, Royal Caribbean, time-tested favorites.

4. Anthem of the Seas is one of the few ships that travel to CocoCay

If you haven’t heard yet, CocoCay by Royal Caribbean is an absolute can’t-miss cruising experience. A private island unlike anything you’ve ever seen, CocoCay is part of the Perfect Day at CocoCay experience that’s only available to travelers on certain Royal Caribbean cruises.

What can you expect at CocoCay, that makes it so great? Um, how about helium balloon rides, 450 feet up in the air? Or swim-up bars? What about the largest freshwater pool in the Bahamas, or one of the largest water parks in the Caribbean? You can also expect floating cabanas, plenty of space for the entire family to fan out and explore, loads of dining options, places to both thrill and chill, a beach club and more.

The Royal Caribbean International mobile app truly makes traveling a little bit easier, especially for families and multigenerational travelers. The app will allow you to check in to your cruise ahead of time, get into your room, schedule out your itinerary for the cruise, make reservations for various activities and more.

You literally could plan out your family’s entire cruise right with the smartphone in your pocket, no need to talk to a concierge or pick up the phone to actually talk to a person.

6. The rooms aboard Royal Caribbean’s Anthem of the Seas are a cut above the rest

If you’ve traveled on some other cruise lines, then you might think of interior staterooms, or just staterooms in general, as being dark, small and not all that fashionable, but Royal Caribbean’s Anthem of the Seas is here to change that for you. The staterooms aboard the ship truly are a cut above the rest, offering you tons of space, lots of natural light, gorgeous views and a modern and updated look.

Interior staterooms are decorated like a chic, boutique hotel guestroom, with accent lighting, pops of color and attractive artwork. Ocean view staterooms are much the same, with huge circular windows and comfortable seating areas. Balcony staterooms extend your space even further, with spots to sit and watch the world go by outside.

You can even watch the world go by virtually, with the help of Royal Caribbean’s futuristic virtual balcony staterooms, which project real-time footage from the exterior of the ship right onto your wall. It’s like nothing you’ve ever seen on any other cruise ship, that’s for sure!

7. If you need to relax and rejuvenate, it’s extremely easy

While it’s true that Royal Caribbean’s Anthem of the Seas offers quite a lot in the way of fun and adventure, if you’re looking for something more along the lines of relaxation and quiet time, then you can rest assured that you’ll find that as well aboard the ship. The Vitality Spa provides a full range of therapies and treatments, from massages and facials to medi-spa treatments and acupuncture.

You can get hair and nail treatments as well, and even teeth whitening treatments. There’s a steam room and solarium, for further relaxation, and a whirlpool. After or before your spa treatment, you can enjoy a little fresh air on the more adult-friendly outdoor jogging track, which is a nice respite from some of the other outdoor areas that are pretty kid-focused. And, if you want to relax a little by working up a sweat and getting those endorphins flowing, then you can do that at the great state-of-the-art fitness center.

8. The kids will always be entertained

No matter what ages your children are, they’ll find plenty to do and enjoy while aboard Royal Caribbean’s Anthem of the Seas. As we already mentioned, there are tons of things for them to do when they’re at the Seaplex, but other spaces catered to their needs include the H20 Zone kids-only water park, the arcade, the outdoor sports areas and more.

There are also structured activities led by the brand’s talented team of child caregivers, who all plan enjoyable activities that are not only fun, but also often educational. There are STEM-based activities, creative and artsy programs and more.

9. Kids aren’t the only ones entertained — Mom and Dad are sure to keep busy as well

Don’t think that the kids are the only ones who are going to be entertained non-stop. Adults have plenty to enjoy, too. Live music can be found at just about every turn. Guest musicians perform on the regular. Broadway performances and other spectacular theatrical shows are a must to experience while on your cruise.

You might even get a chance to hear a live orchestra perform. From jazzy music to pop hits, classic bebop sounds to cabaret, you’ll hear a little bit of it all. And don’t just sit in your seat. There are loads of ways you can get on your feet and dance to the groove, with disco parties, salsa and latin dancing lessons and fiestas taking place all across the ship during your cruise.

Anthem of the Seas FAQ:

Is Anthem of the Seas the largest cruise ship?

While Anthem of the Seas did break some records for size (for example, it was the largest ship to cruise Canadian waters when it began sailing to Canada in 2016), it is not the largest cruise ship.

Does Anthem of the Seas have Central Park?

No. Central Park is an Oasis-class feature from Royal Caribbean and does not appear on Quantum-class ships.

How large is Royal Caribbean’s Anthem of the Seas?

Does Anthem of the Seas have a movie theater?

While there are traditional theaters aboard Anthem of the Seas, the ship does not have a movie theater. 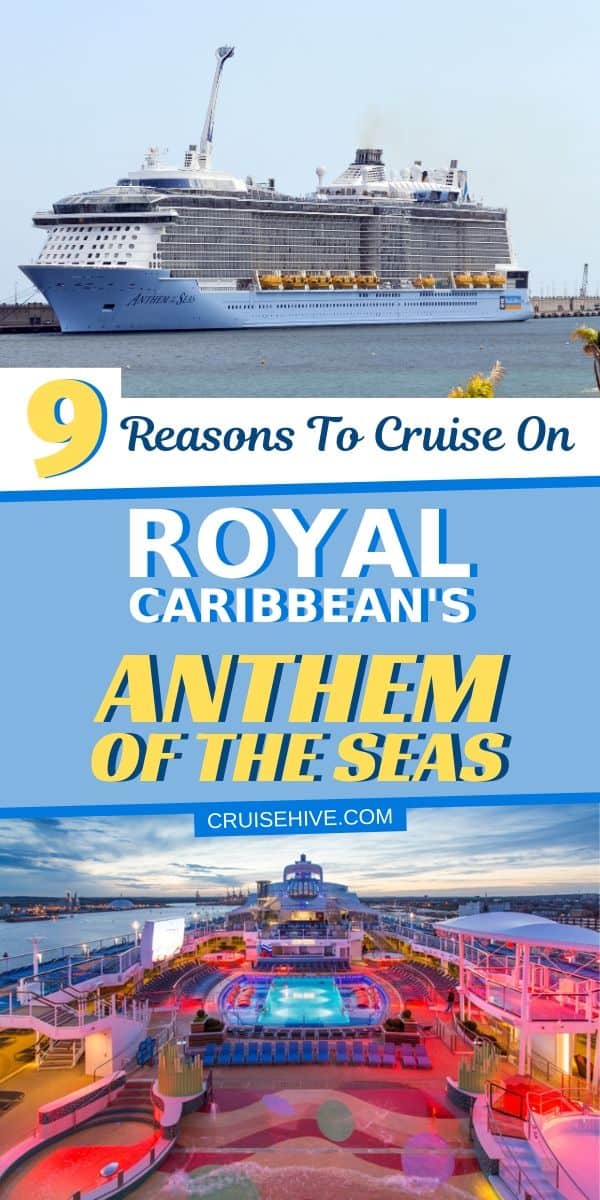