Queen Mary 2 which is operated by Cunard Line made its very first call at Amber Cove in the Dominican Republic on Sunday, November 22.

Guests aboard the british based ocean liner have been among some of the first to enjoy the new Amber Cove port. Amber Cove which is located on the north coast just outside the historical town of Puerto Plata is mainly owned by the Carnival Corporation. The new destination officially opened at the beginning of the month and will get calls from all the major Carnival brands.

A ceremony was held onboard the 148,500 gross ton vessel to mark the historic visit. The traditional event was attended by cruise ship and port executives.

“It is an honour to bring Cunard guests to Amber Cove, and to join Carnival Corporation’s major cruise brands in making regular visits to the Puerto Plata. We thank the kind people of Dominican Republic for such a warm and hospitable welcome, and we look forward to further time Queen Mary 2 will be spending here in January as part of her World Voyage.”

The first cruise ship to call at Amber Cove was the Carnival Victory on October 6 2015. passengers from any ships visiting the port can enjoy the grand Victorian and colonial past along with retail stores, dining venues, bars and market style stalls. There are great views from the Sky Bar along with tons of shore tours to keep everyone busy.

From Amber Cove, Queen Mary 2 continued on her 13-night voyage, ending in New York on Wednesday, November 25. Queen Mary 2 carries over 2,600 guests and is also scheduled for a major refurbishment from May 2016. 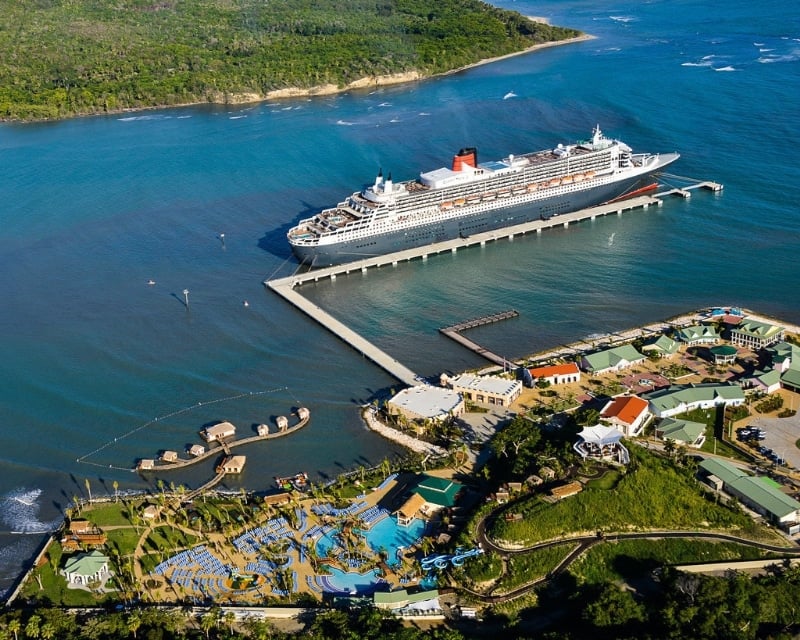