One of the world’s most iconic cruise ships sailed into Brooklyn yesterday, but it wasn’t just any arrival. The large ocean liner has recently completed a huge dry dock in Hamburg, Germany costing around $132 Million. The ship was ending its first North American voyage since its upgrade was completed on June 21, 2016.

The 150,000 gross ton ship arrived in New York on July 6 for the end of a 20-night transatlantic voyage which departed Southampton, UK on June 23. The fresh new ship which is also known as the Queen Mary’s remastering celebrated its fresh look for North America. It was a day full of celebration which was also attended by CEO of Carnival Corporation & plc, Donald Arnold.

“More than any other ship in our Carnival Corporation fleet of more than one hundred ships, Queen Mary 2 is the most famous, the most recognizable and certainly the most unique. It was the dream of our Chairman Micky Arison to build the Queen Mary 2 almost 15 years ago. He aspired to recreate that luxurious ocean liner experience from the past and Queen Mary 2 is the glorious result.”

The refit was conducted in the Blohm + Voss Shipyard, in Hamburg, one of the only shipyards in the world large enough to hold Queen Mary 2. It was a 24-hour a day operation, with over one million man hours put into the refurbishment, during a 25-day period.

Queen Mary 2 first arrived into New York on July 1 as part of its 20-night voyage:

“The remastering of Queen Mary 2 continues the transatlantic tradition by the thoughtful contemporizing of the product for today’s discerning traveler, while maintaining the refined design aesthetics and service standards that are deeply based in British style and refinement. The Remastering is a testament to Cunard’s attention to detail, incorporating inspiration from our past that continues to propel the powerful Cunard story, which we think will strongly resonate with today’s travelers,”

The 2,640 passenger vessel has already set sail back across the Atlantic Ocean towards Southampton. Queen Mary 2 will then sail to Hamburg, Germany where the remastering took place. Some of the biggest upgrades include expanded kennels, new Carinthia Lounge, improved dining venues and 50 new staterooms. 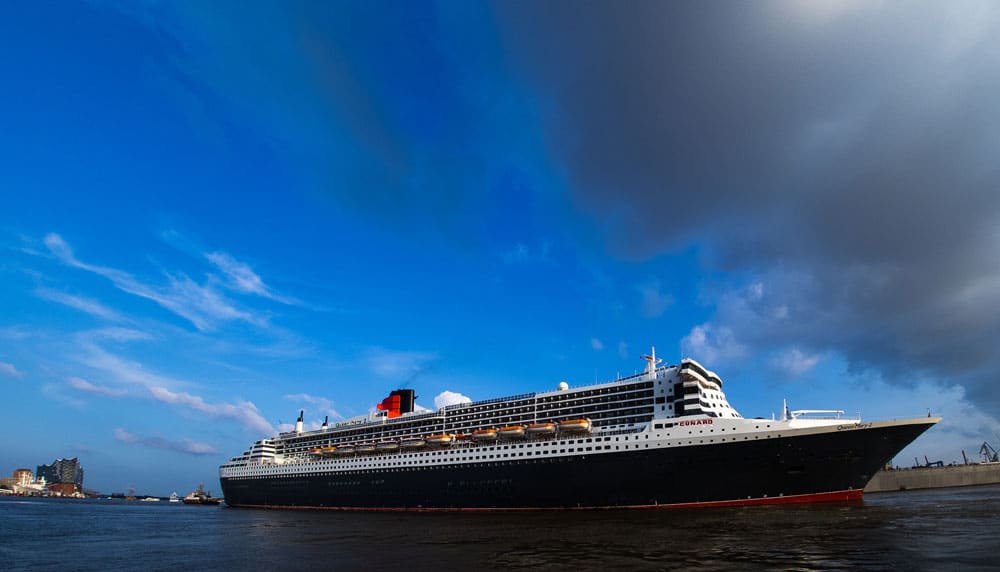