The large cruise ship will make its arrival into New York in less than 25 days. The American city is gearing up for its sailing into port. Quantum of the Seas is making waves across NYC billboards, screens and digital displays capturing the attention of New Yorkers everywhere…including underground. With Quantum of the Seas introducing a wave of technological features that have never before been possible at sea, including ultra fast wireless capability that allows for unprecedented connectivity, the cruise line partnered with the Metropolitan Transportation Authority (MTA) to bring free Wi-Fi to underground subway platforms in Manhattanand Queens.

Highlights of Quantum of the Seas range from RipCord by iFLY, a heart pounding skydiving experience, to Bionic Bar, which is home to the world’s first robotic bartenders, a number of first-at-sea experiences including bumper cars and roller skating, and North Star, an engineering marvel that gently rises more than 300 feet in the air to take guests on a spectacular journey with awe-inspiring, 360-degree views.

The countdown has been happening all year and now as the days get closer the cruise industry gets more excited! To get in on the action Cruise Hive has a collection of recent photos of Quantum of the Seas. The photos are from the ship newly installed North Star at the top of the ship which also shows the open deck in all its glory:

The vessel is currently in the very final stages of construction which includes fitting out all the public spaces and testing all technical operations.

The 167,800 Quantum of the Seas will begins its inaugural season sailing out of New York Harbor when it’s handed over to Royal Caribbean next month. After that from May 2015 the ship will begin sailing out of Shanghai, China where it will sail three- to eight-night itineraries year-round from Shanghai to Japan and Korea. 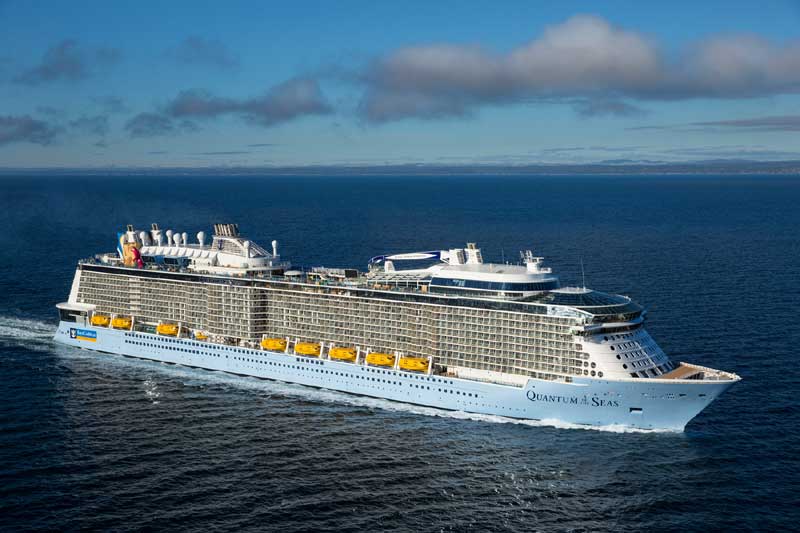