Quantum of The Seas Finally Floated Out of Meyer Werft Shipyard

One of the worlds most innovative cruise ships Quantum of the Seas has finally been floated out of the Meyer Werft shipyard in Papenburg, Germany.

The ship which is currently being built by the German ship builder Meyer Weft and is set to be delivered to Royal Caribbean in November 2014 was originally supposed to be floated out on August 9th. Due to poor weather conditions the float our was scheduled for today August 13th

The 167,800 ton vessel has been hidden inside the large shipyard complex until today which is also the first time all the people along the shore banks have been able to see a full view of it along with many more online.

If you missed the float out then you can watch it in full below but its recommended that you skip to about 50 minutes as the first part there is no movement:

This wasnt just any float out due to a large Magenta Polar Bear 30 feet high on the ships open deck. This is a piece of Art onboard which has been made by Denver-based artist Lawrence Argent. Most cruise lines sell art onboard and offer an auction events to guests.

“It is quite exciting to be collaborating with Royal Caribbean on a very visible and significant piece of art that will allow my work to be exposed to thousands of people each week,” said Argent.  “The thing about cruise vacations is that they transport individuals from the normality of their everyday lives and leave them open to new experiences.  The bear engages those that have a fear of thinking they don’t know what art is and turns it into an approachable entity.”

Quantum of the Seas is now berthed next to the shipyards pier where many different tests will be done. In the coming months there will be sea trials and propulsion testing. The ship will then be delivered to Royal Caribbean where it will sail out of New York city for its inaugural cruises. 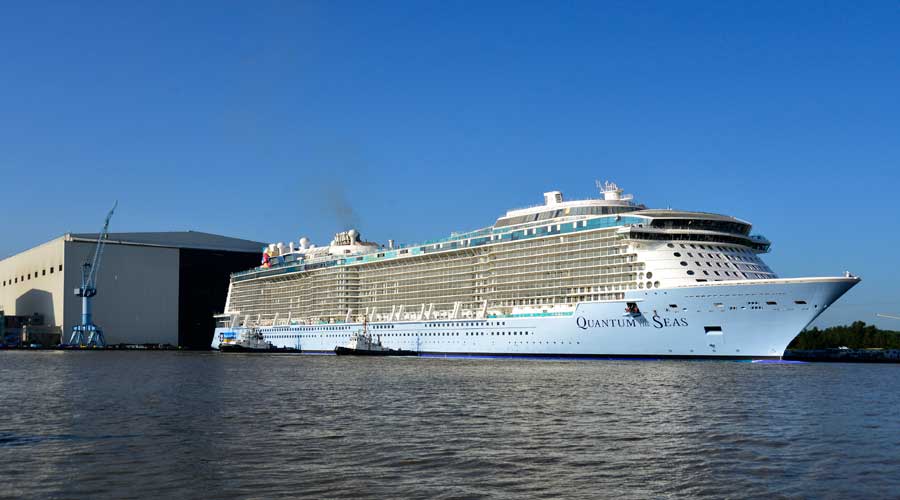