The cruise ship that has pretty much dominated the cruise headlines all year-long has finally arrived at its new home at Cape Liberty Cruise Port in Bayonne, New Jersey.

Quantum of the Seas had been sailing across the Atlantic ocean from Southampton, UK for the past several days on an eight-night crossing. And for the first time was sailing with paying passengers who got to be some of the first to experience all the innovative features on board. The ship is known as the worlds first “Smart Ship” due to its high tech innovation including super fast wireless internet, robotic bartenders, virtual balconies and all the new features at Two70.

“Quantum of the Seas isn’t just changing cruising, it’s changing how today’s traveler vacations,” said Richard D. Fain, chairman and CEO, Royal Caribbean Cruises Ltd.  “It’s not just how you travel, it’s the experience from start to finish.  With Quantum we are empowering our guests to customize every aspect of their journey, providing them with an unprecedented level of freedom and flexibility.”

When the large vessel arrived in North America first thing in the morning on November 10th it began a new era in cruising and will up the game with design and innovation in the future. Starting on November 12th the ship will sail three special two-day cruises for travel agents and cruise professionals.

On Friday November 14th the big christening ceremony will be held at the new cruise terminal in New Jersey. Kristen Chenoweth who is Quantum of the Seas godmother will of host the events which are expected to be one of the highlights of 2014. 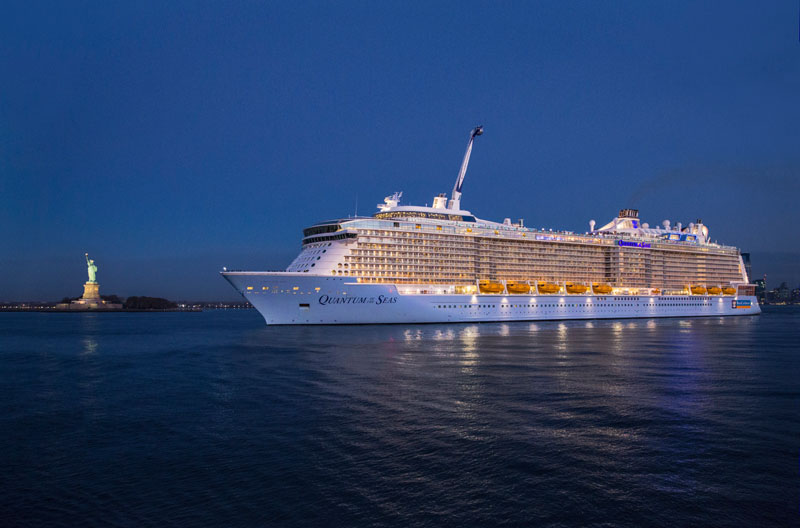 Royal Caribbean provides a business update and the current status of bookings along with impacted from the COVID-19 pandemic.
Read more
Royal Caribbean

Royal Caribbean has announced an extension on its pause on operations through July 31 with cruises now starting in August.
Read more
Ports

Royal Caribbean's Adventure of the Seas has finally been allowed to dock in Jamaica after issues between the government and the cruise line.
Read more
Royal Caribbean

Royal Caribbean's Allure of the Seas cruise ship is finally set to begin the delayed dry dock in Cadiz, Spain but will be much shorter than planned.
Read more
Royal Caribbean

Another Crew Member Has Died on Another Cruise Ship

A crew member has died on Royal Caribbean's Mariner of the Seas, the fourth to die on different ships within the past 10 days, not from COVID-19.
Read more
Royal Caribbean

Royal Caribbean-owned cruise ships have been meeting up at the cruise line's private island to transfer the crew for repatriation.
Read more