Royal Caribbean have announced that Quantum of the Seas will be sailing from China all year round from May 2015.

Quantum of the Seas will debut in November 2014 and will do a full inaugural winter season sailing out of New York and sailing to the Caribbean. After the winter season the innovative ship will then re-position to Shanghai (Baoshan) in May 2015 where it will do year round cruises in Asia.

[quote_box_center]“Consumers in China have grown to expect the best the world has to offer, and Quantum of the Seas meets that standard like no other ship,” said Adam Goldstein, President and COO, Royal Caribbean Cruises Ltd. “We are ready to accelerate the growth of this vital market with a ship that will capture the imagination of travelers looking for a one-of-a-kind vacation experience.”[/quote_box_center]

[quote_box_center]“Every trend we are seeing in China tells us we can achieve real long-term competitive advantage and appealing returns on our investments in this fast-growing market by accelerating our presence there,” Goldstein said. “We will have to be nimble, but the ability to move fast is one of our strengths.”[/quote_box_center]

China is one of the fastest growing cruise markets in the world and by placing Quantum of the Seas in China Royal Caribbean will be leading all the other major cruise lines in the market. The cruise line all ready has Mariner of the Seas and Voyager of the Seas in the region which are also two large ships.

In late June 2015 Quantum of the Seas will begin sailing 3 to 8 night cruises from Shanghai, China to South Korea and Japan. Liberty of the Seas will takeover sailings from New York cruising to Bermuda, Caribbean, New England and Canada for the 2015 summer and autumn seasons.

[quote_box_center]“These incredible ships will meet the sophisticated expectations of consumers in Shanghai, New York and London. Our mantra for the new Quantum class of ships is ‘this changes everything’ – and upping our game in these key markets achieves just that,” said Dominic Paul, Vice President, International, Royal Caribbean International. “Our distinctive style of high quality innovative cruises has become known to travelers around the world and we will continue to deploy our most technologically advanced ships where the demand is, with the expectation of winning new converts to cruising.”[/quote_box_center]

Quantum of the Seas will bring many new innovations at sea including the SeaPlex, North Star and a recently announced new Dynamic Dining concept. The ship is currently being constructed at the Mayer Werft shipyard in Papenburg, Germany and will be 167,800 tons carrying 4,180 passengers.

Let us know what you think of Quantum of the Seas sailing from China in the comments below. Cruise Hive is based in China so will hopefully get a chance to cruise on the new ship. 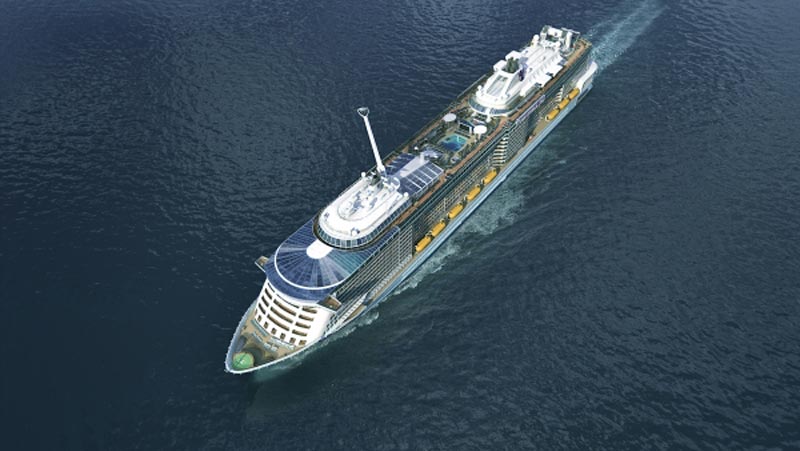