We have received the latest statement from Princess Cruises which you can read below:

NICE, FRANCE (October 14, 2016 – 1450 hours) – Princess Cruises can confirm that during arrival at the port of Nice, (at approximately 0630 hours local time) under normal weather and sea conditions, Pacific Princess experienced an unexpected change in wind conditions and made contact with the breakwater wall resulting in damage to the port side of the ship under the water line.  The water tight doors were already closed containing the inflow of sea water. The ship is safely alongside at the pier. There were no injuries and at no time were any guests or crew in danger.  Guests are ashore enjoying excursions and site seeing.

Divers are on scene assessing the damage to determine repair options and the amount of time required to complete.  As a result of this incident we have made the decision to end the current cruise early so that repairs can begin immediately. We very much regret the disruption of this cruise and will be providing guests a goodwill offer and of course will arrange required transportation and lodging at our expense so that they may proceed with their onward travel arrangements as scheduled on Sunday, October 16.

Pacific Princess is sailing with 669 guests and 382 crew members.  The ship is on day 10 of a 12 day cruise that departed Venice, Italy on October 4, and was scheduled to arrive in Barcelona, Spain on October 15, for an overnight stay before ending the cruise on October 16.

Finally, we regret to announce that we will have to cancel the next cruise scheduled to depart Barcelona on October 16, in order to complete the repairs.  Guests for whom we have cancelled this next cruise will receive a full-refund and a future cruise credit.

Pacific Princess which is operated by Princess Cruises has hit the breakwater wall at the Port of Nice at around 6:30 this morning.

Princess cruises has stated that the 30,270 gross ton vessel experienced a sudden shift in the winds which resulted in the ship hitting the ports breakwater wall. At the time weather conditions were normal.

The ship’s port side under the water line was damaged and took on water. All the water tight doors were closed at the time keeping the water in one compartment of the ship. Watertight doors are always kept closed when ships are not in port. No injuries have been reported and there is no danger to anyone onboard.

Divers are looking at the damaged caused under the water line while the ship is docked in Nice, France. The cruise line has decided to cancel the current cruise so repairs can be made as soon as possible.

Pacific Princess was on a 12-day cruise from Venice, Italy and was coming to the end of the voyage before arriving in Barcelona, Spain. The next scheduled cruise is from Barcelona for 13-days, it’s not yet known if the upcoming voyage will be affected. 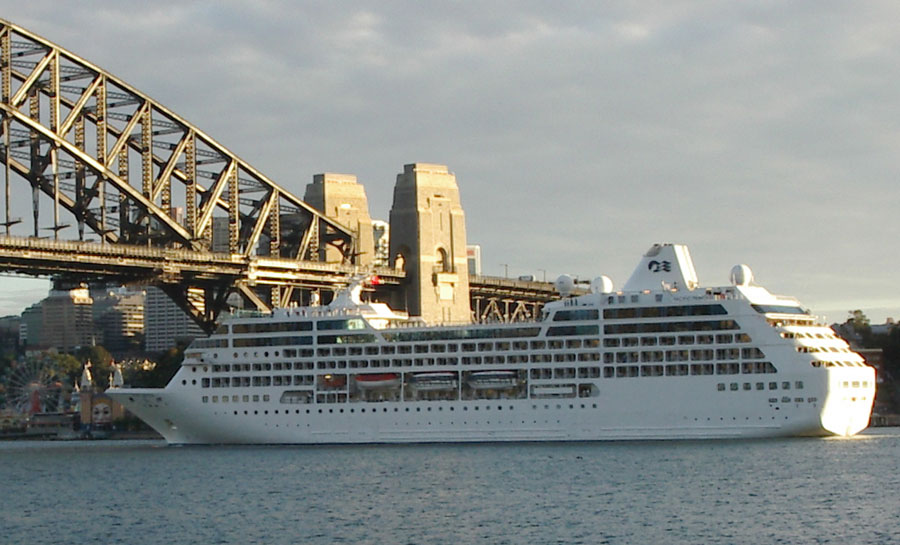