To the surprise of just about everyone, there was a powerful Earthquake which hit the Western Caribbean. First of all, let’s just say we are so grateful that this didn’t turn into yet another major disaster for the region.

The earthquake had a magnitude of 7.6 which is among the most powerful in recent times. According to the U.S. Geological Servey (USGS), the location of the latest quake occurred 44 KM East of Great Swan island in Honduras which is located in Central America and along the Caribbean Sea. The USGS actually mentioned that the main quake happened after 2 AM on Wednesday morning.

The USGS posted the following detail about the January earthquake:

The January 10, 2018, M 7.6 Great Swan Island, Honduras earthquake occurred as the result of strike slip faulting in the shallow crust near the boundary between the North America and Caribbean plates. Early focal mechanism solutions indicate that rupture occurred on a steeply dipping structure striking either west-northwest (right-lateral), or west-southwest (left-lateral).

At the location of this earthquake, the North America plate moves to the west-southwest with respect to the Caribbean plate at a rate of approximately 19 mm/yr. Local to the January 10, 2018 earthquake, this motion is predominantly accommodated along the Swan Islands transform fault, a left-lateral structure. The location, depth and focal mechanism solution of today’s earthquake are consistent with rupture occurring along this plate boundary structure, or on a nearby and closely related fault.

It seems those on cruise ships in the area where the Quake hit were not impacted. Most didn’t feel a thing while in port but there was a worry from relatives and friends.

Everyone is safe. We left Costa Maya, Mexico last night and are on our way back to Miami. Did not feel the earthquake at all.

Can you imagine being out on a cruise during a 7.8 earthquake and then tsunami warning. F that pic.twitter.com/42gKorFIxC

No injuries or fatalities have been reported and the damage seems relatively low. Tremors were felt when the first quake struck at around 10 PM on Tuesday night and those in Hondurans felt it the most. The cruise destination of Grand Cayman, Western part of Jamaica and even Cozumel in Mexico felt it.

At the time the biggest worry was a tsunami. Tsunami warnings were sent out across the Caribbean after the powerful quake and thankfully this didn’t occur with the warning coming to an end not long after. With so many small islands a tsunami would be devastating especially after the recent Hurricanes from September 2017. 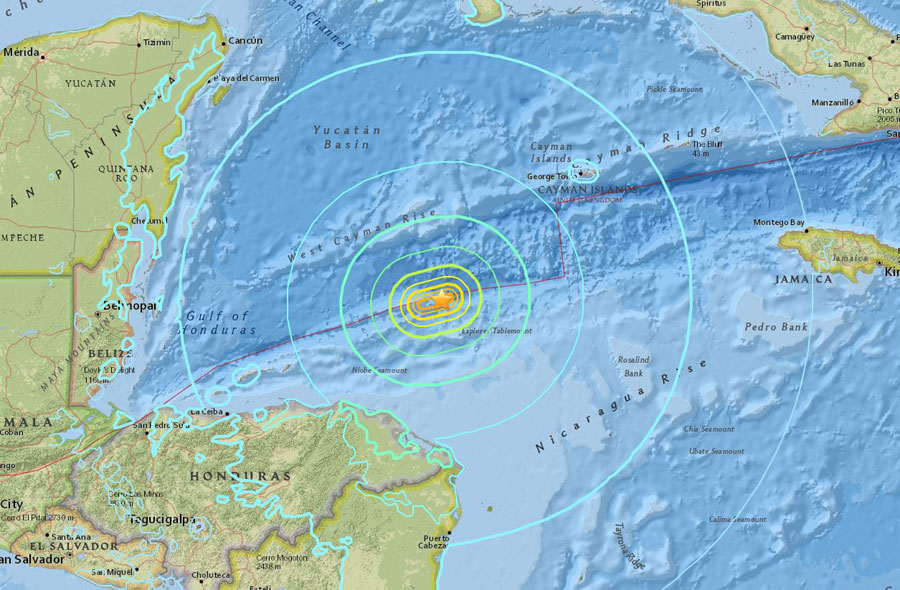