P&O Britannia Has Been Named By Her Majesty The Queen

P&O Britannia has finally had its royal approval by Her Majesty the Queen during a grand ceremony in Southampton on March 10th.

The ceremony was a great success which began with the comedy wit of Rob Brydon who can also be found on P&O Cruises most recent TV ads. Brydon also hosted the event along with the evening Gala onboard the ship the day before. The marching band provided the grandest of atmospheres and perfect music harmony. An outstanding performance of Strictly Come Dancing dancers entertained the audience before the Royal arrival of Her majesty the Queen and the Duke of Edinburgh.

If you missed the naming ceremony that was streamed live on the P&O site you can watch it in full right here. You can also check out the highlights below of one of the most important days for the British cruise industry and the world:

Her majesty the Queen named the 142,000 gross ton cruise ship directed by Britannia captain, Paul Brown. the champagne bottle came down and hit the Britannia logo on the hull which then began a frenzy of confetti. As the ref, white and blue confetti began to settle classical artist Laura White sang the nation anthem. Later once the Queen departed she sang “Rule Britannia” also joined by the marching bands.

“The Britannia is a stunning ship that is equal parts beauty, class and entertainment, and will surely provide an amazing experience for our guests,” said Donald. “Today’s celebration, filled with so many classic elements that are quintessentially British, was the perfect way to kick off her official start of service in our fleet. As Britannia immediately begins wowing our guests on her inaugural voyage this weekend, we look forward to building on this excitement and momentum with our next great ship addition in 2015, the AIDAprima. She will join our Carnival Corporation fleet this fall as one of the most technologically advanced cruise ships ever built.”

Donald added, “These amazing new ships are part of our fleet enhancement strategy that will see 10 new ships join our fleet in the next three years. More importantly, every one of our ships plays a key role in helping us meet our goal to consistently exceed guest expectations on every voyage, and to give our guests the vacation of a lifetime, every time they cruise with us.”

P&O Britannia was built at the Fincantieri shipyard in Italy but will showcase British cruising as she sails on oceans across the globe. For now her maiden voyage will set sail on March 14th stopping in Spain, France and Italy before arriving back in Southampton on March 28th. 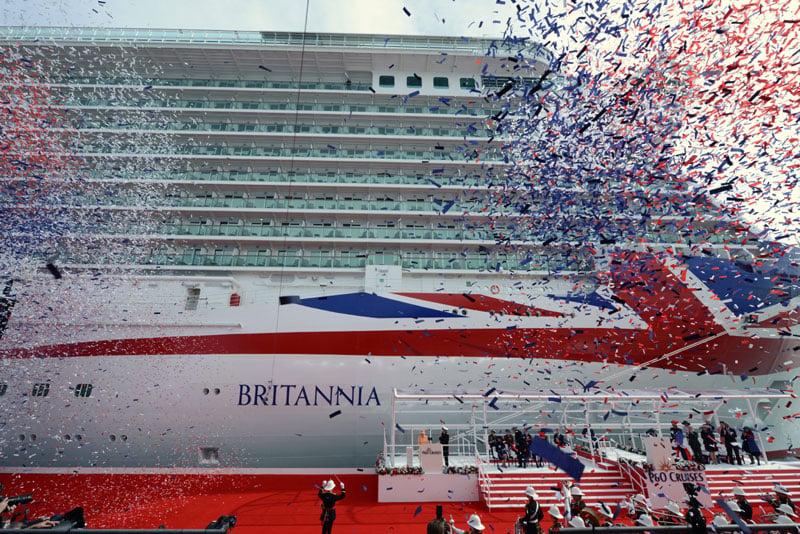