Royal Caribbean has released new photos of Wonder of the Seas just after her float out onto the water for the very first time.

Wonder of the Seas Construction Photos

Royal Caribbean’s new cruise ship which is currently under construction at the Chantiers de l’Atlantique shipyard in France has floated out onto the water for the very first time. This is a major construction milestone for what will become the world’s largest cruise ship, the fifth Oasis-class vessel in the fleet.

To showcase the huge moment, the cruise line has released a new batch of photos with Wonder of the Seas on the water for the first time. The vessel can also be seen being transferred out of the construction dock and into a wet dock.

From there the construction process will enter a new phase with the majority of the focus on outfitting the interior spaces. Let’s take a look at the new photos below:

Wonder of the Seas Float Out
1 of 6

Construction on the Royal Caribbean cruise ship first started in April 2019 and ever since then, the huge blocks have come together to make the vessel as one. She is now watertight and work will continue even though there is a global pandemic. The shipyard is following strict health measures to make sure workers remain safe.

Also Read: 27 Things to Do on Royal Caribbean’s Harmony of the Seas

Wonder of the Seas was originally scheduled to be completed in 2021 but the global health crisis has now delayed delivery into 2022. Excited cruisers will just have to wait longer until she debuts out of Shanghai, China. The ship will also be the largest ever to sail the region.

Once completed, Wonder of the Seas will be over 228,000 gross tons and will be just slightly larger than her sister ship Symphony of the Seas which is currently the world’s largest cruise ship. 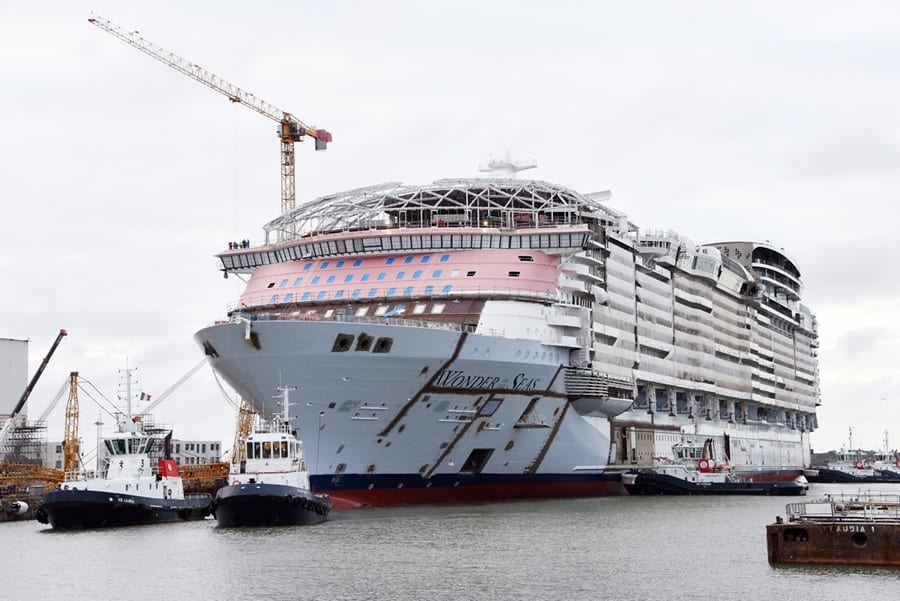