Local people are angered by a Billionaires plans to build a large cruise ship terminal on Australia’s famous Gold Coast Beach in Queensland, Australia. According to 7News the state government is issuing two new Casino licences which could help the new development.

If the development gets approved it could make up to 5,000 new jobs and would start construction in the middle of 2014. The only thing is local residents oppose the plan due to many reasons. One reason is that the new terminal could break the popular surf at the beach. One angry resident says the area is currently public space and the people behind the proposal is “A dirty developer”.

The project will cost up to two billion dollars and will stretch 800 metres along the beach. The project is huge with three cruise ship births, a mariner, six holiday resorts, 14 apartments, park land and of course a casino. This would bring economy benefits to the local people and could be a popular choice for major cruise lines as they increase their presence in the region.

There is also a plan for another cruise terminal in nearby Broadwater and if that development gets the go ahead then the cruise ship terminal planned by the Billionaire Bob Ell will be scrapped. So it looks like no matter what happens, this region will be getting a major new ship terminal which will be welcomed by large cruise lines.

Lets us know what you think in the comments below about this large new development for cruise ships. 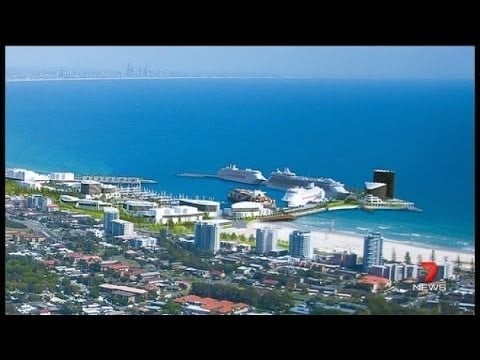