Ovation of the Seas Arrives At Southampton, UK For First Time

Royal Caribbean’s newest addition to the fleet has arrived at Southampton, UK for the very first time. Ovation of the Seas began arriving into Southampton before 2pm and was docked in the port within the hour. The new ship arrived under strong winds but nothing the third Quantum class ship can’t handle.

Ovation of the Seas will now stay at the british port until April 14th. The ship will be receiving a special guest while docked which Royal Caribbean will be revealing shortly (Something tells us it’s going to be a Panda!). From April 14th ovation of the Seas will sail a series of cruises out of Southampton where the guests and travel professionals will be the first to experience all the innovative onboard features.

Take a look at the video below by our friends at LinerLovers:

This is one of the first videos available online of the 167,800 gross ton Ovation of the Seas. The vessel looks nice and shiny as it arrives on a choppy gray British afternoon, pretty normal conditions then! The ship will be the star of Southampton and will be taking on supplies and last-minute deliveries before the first sailings begin.

A few more close-ups for you: What a beautiful day to welcome our brand new Quantum Class ship, #OvationoftheSeas! ? pic.twitter.com/g2M0es1xyU

On May 3 the large ship will set sail from Southampton for the last time as it commences 52-night Global odyssey voyage. The ship will call at some breathtaking destinations until it reaches its new homeport of Tianjin. China on June 24. After a Summer season sailing from China ovation of the Seas will spend a season sailing from Sydney, Australia starting in December 2016. 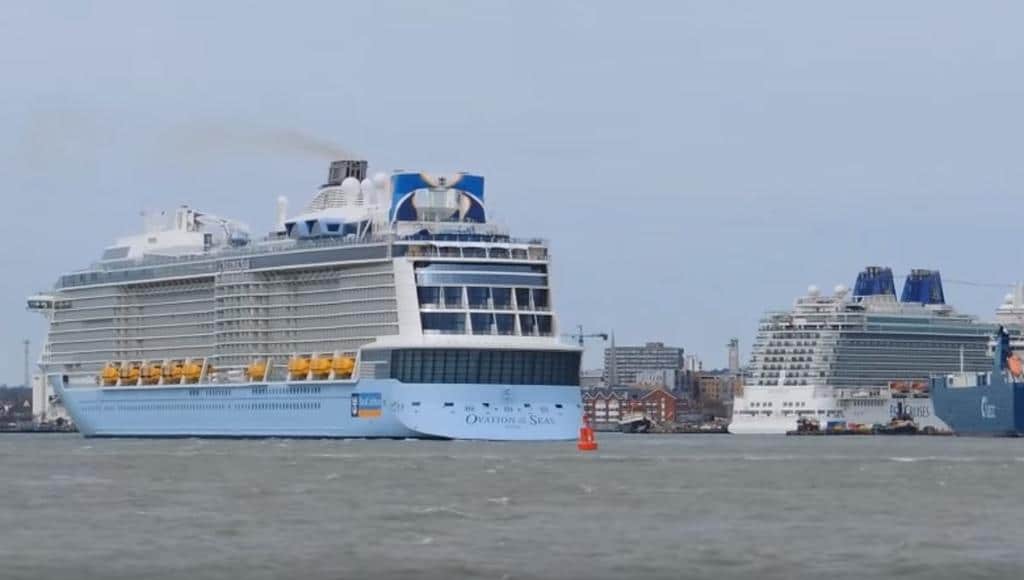