Not Long Until The New ms Koningsdam

It’s not long until the ms Koningsdam sails her very first cruise in April 2016. The ship will be the first out of many new cruise ships entering service this year.

The Koningsdam will become the new flagship of the Holland America Line fleet, showcasing the very latest the cruise line has on offer. Once the vessel is delivered to the Carnival owned cruise line in April guests can enjoy some new groundbreaking features.

One of the most exciting new features on the ship will be The World Stage, 270-Degree Panoramic LED Screens will provide outstanding visual displays in a theater which will adjust according to the shows. This moves Holland America away from the traditional theaters which most cruise ships have. Koningsdam will also feature the new Billboard Onboard experience as well as ‘Music Walk’ partnerships including The Lincoln Stage and B.B. King’s Blues Club. Just watch the video below and see what’s coming up.

The ms Koningsdam is in the final phase of construction at the Fincantieri shipyard in Marghera, Italy. Crew members have already started setting up the ship ready for sailing and the interior spaces are coming to completion. Holland America has also been keeping us all updated with its video series. You can watch the first episode here, a nice insight at the Koningsdam at the shipyard.

New Dining venues including the intimate French Seafood restaurant Sel de Mer. The ship will offer plenty of dining options for any type of cruiser and for families it’s good news! Holland America are bringing new purpose-built staterooms for families. The 32 new specially designed family ocean view staterooms will range from 222 to 231 square feet and feature special amenities such as two bathrooms and accommodations for five people. The entire ship will be elegant with a modern luxury design, and if you don’t believe us then just look at this Lido deck rendering below:

Ms Koningsdam will be 99,500 gross tons 2,650 and carry 2,650 passengers. The ship which is also known as the first Pinnacle-class will begin sailing a range of Mediterranean cruises, starting from Civitavecchia, Italy on April 8. 2016. Then during the summer season the vessel will sail from Amsterdam, Netherlands as part of its inaugural sailings. The ship will finally sail across the Atlantic to its new homeport at Port Everglades, Florida. Koningsdam will sail Caribbean cruises starting from November 2016 through April, 2017. 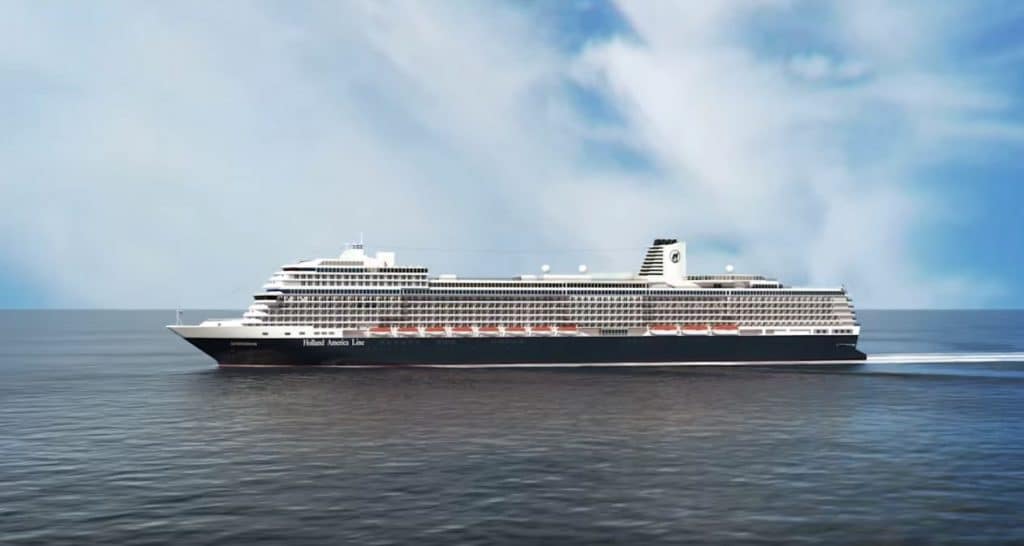