Not All Is Good With Norwegian Cruise Lines Future Belize Port

It seems not all is good with Norwegian Cruise Lines Harvest Caye private island.

“Our ships will be going somewhere else, unless we can figure out a way to make the experience better.” Colin Murphy, Norwegians Vice President, Destination & Strategic Development, following the rejection of their proposed purchase of Crawl Caye in southern Belize for development as a cruise port.

TROUBLE IN PARADISE: Dirty tricks and bully boy tactics in the Tropics?

Norwegian Cruise Lines announced the purchase last week of the 75 acre Harvest Caye off the coast of southern Belize, and their intention to create a cruise port and eco-friendly private island two miles south of the tiny fishing village of Placencia, along with a mainland hub for land-based tours. The project is apparently set to generate local jobs, so you could be forgiven for wondering why there is local, and very vocal, opposition.

The overwhelming attraction for some Belizeans is the promise of 800 to 1200 jobs (the numbers of jobs, and whether direct or indirect, varies according to the source), and NCL says that they have created a hiring programme specifically for Belizeans who want to work on their vessels until their island project is complete, but no details are available. Surprisingly, some people seem happy to accept these suggestions of jobs at face value, despite employment numbers not being included in the MOU indeed, the only mention of employment in the MOU is that foreign employees will not exceed 25%.

Even so, the hope of up to 1200 jobs in an area with nearly 12% unemployment is understandable, perhaps until people start to question what they will do for the other six months of the year, find themselves unable to meet the rental costs for vendors booths at the cruise terminal, or meet the licensing regulations for the Tourism Boards proposed certification scheme for artisans.

The local opposition is based largely on the premise that the small and uncertain number of jobs does not begin to outweigh the environmental damage of having c. 4,000 people descend on Southern Belize in an environmentally fragile area, the costs to the communities and their traditions and culture, or the threat to the established overnight ecotourism industry. They’ve heard it all before, having successfully blocked an attempt by Royal Caribbean in 2010 to establish a cruise terminal and tourist village in Placencia village, a campaign for which the Placencia Citizens for Sustainable Development won a World Responsible Tourism Award.

Around the same time, the Government commissioned and subsequently adopted their National Sustainable Tourism Master Plan. Both NCL and the Government of Belize have made much in their propaganda of the Master Plans reference to establish a second cruise port to reduce over-crowding in Belize City, but the inconvenient truth is that the same Plan identified a second port location in Belize City and specifically stated that pocket cruise tourism [less than 300 passengers] is the only acceptable form of cruise tourism in South Eastern Coast Belize.

One local activist told us, There is so much that is so wrong with the way the Government and NCL are behaving, starting with NCLs threat to pull out of Belize when they were refused their first proposal on environmental grounds, to the secret dealings and complete failure to consult with locals, as well as the huge amount of spin they are able to create given their US$50 million+ annual advertising spend. Its quite ironic that Hugh Darleys blog (NCLs Belize Project Director) talks about community involvement being vital in destination development, how cruise ship companies should not manage destinations, and how countries that do not develop PPIs with the cruise lines benefit little from the earnings each time ships came to port. It seems like he had the best of intentions for the Port of Falmouth, but look at what a disaster thats turned out to be.

An environmentalist said, The MOU calls for a minimum of 25% of passengers going on tour, leaving 3000 people on 12 acres of a 71 acre island, and they call that eco-friendly? Thats a higher density population than New York City. And NCL says this project for a 4000+ passenger ship has a smaller footprint than the previously approved hotel for 760 guests. Harvest Caye is a critical manatee habitat and breeding ground, and they want to bring in a ship over a thousand feet long? This is a fragile area and none of this makes any sense. Southern Belize isnt suitable for large cruise ships, period.

NCL has already provoked outrage among some of the Garifuna community with their culturally insensitive plans to hold a “Dugu Dance” on the island. The Dugu is, in fact, a sacred ceremony. One lady wrote, I am sick to my stomach with shame I pray that my Garifuna brothers and sisters will not put a few dollars ahead of cultural pride. Dugu is so sacred that they will never understand. The National Garifuna Council followed up with their stinging condemnation of NCL, saying, We find the announcement insulting and indicative of arrogance and ignorance on the part of those concerned.

NCL says they are disappointed at the opposition, because people rejected the proposal before they even knew properly what it is: NCL has held no public meetings or consultations whatsoever. The Belize Minister of Tourism said, “They refuse even to listen, sometimes being very disrespectful” and “that is not what we want from these people that are supposed to be guiding this industry.” 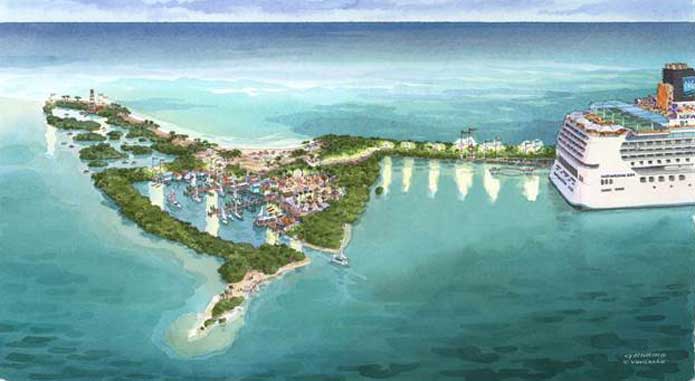