Norwegian Sky Cruise Ship: Overview and Things to Do

Find out everything you need to know about the Norwegian Sky cruise ship, operated by Norwegian Cruise Line, with features and an overview.

Norwegian Sky is one of Norwegian Cruise Line’s oldest and smallest ships, but that hardly means you shouldn’t consider the vessel for your upcoming cruise.

The NCL ship still has a lot to offer and has been completely refurbished, so you can expect all the Norwegian fun and amenities you love, just on a smaller scale.

Norwegian Sky is definitely not what you’d consider a large cruise ship, but that doesn’t mean it’s lacking in any way. In fact, you might find that you prefer Norwegian Sky‘s smaller size, as it means fewer crowds and fewer overwhelming options as you try to pick out what to do and where to go during your handful of sea days.

Norwegian Sky’s construction history is just about as unique as it gets for a cruise ship. This vessel has lived many lives over its more than 20 years of existence.

Norwegian Sky started out, at the conception stage, as not a Norwegian Cruise Line ship, but as a Costa Cruises ship. She was ordered as, and intended to be, Costa Olympia, in 1993. However, by the time the ship was finally delivered in 1999 (there was a large delay due to financial difficulties), it had been purchased by Norwegian.

The ship was redesigned and set to launch as part of the cruise line’s Sun class, which also includes Norwegian Sun. A third ship was ordered as part of the Sun class, but then the order was canceled. The redesigns were extensive, adding and/or moving restaurants, balconies, bridges and more.

After Norwegian Sky’s delivery as the first new Norwegian cruise ship in more than five years, though, Norwegian Sky had to undergo another redesign, in 2004, to become Pride of Aloha, following damages to other Norwegian ships and the need to pick up slack on popular itineraries. The redesign included changes in hull art and the removal of the ship’s casino.

However, there were other challenges to transforming Norwegian Sky into Pride of Aloha beyond just the redesign. Because Pride of Aloha was a U.S.-flagged ship, the crew had to be made up of U.S. citizens, which made employment on the ship difficult. Customer service was frequently lacking, according to cruisers.

After just a few years of this, Norwegian removed Pride of Aloha from service and intended to transfer the ship to Star Cruises. However, when this transfer fell through, the ship reverted back to Norwegian Sky and more redesigns (like adding the casino back to the ship) were completed.

Still, though, the drama would not end for this cruise ship. Norwegian Cruise Line sold the ship in 2009, but then chartered it for service. Then, Norwegian bought the cruise ship back, in 2012.

Most recently, Norwegian Sky was refurbished entirely, in 2019. So, this means you can expect updated and modern spaces and amenities aboard Norwegian Sky, just like you would on any of Norwegian Cruise Line’s ships. The cruise line called the enhancements its most extensive ship refurbishment of the year, encompassing all-new staterooms, restaurants and more.

The interior staterooms are small, as you might expect, but not entirely outdated. Think a budget hotel vibe. The color palettes are neutral whites, creams and grays, with some muted blues for color. Depending on the interior stateroom you book, your room will fit either two or four cruisers.

Ocean-view staterooms are very similar in design, but feature a large, rectangular, ocean-view window in the sleeping area. Unfortunately, these windows are located behind the bed, so you can’t wake up and immediately enjoy the view. You’ll need to sit up and turn around first.

A small selection of ocean-view staterooms feature a round porthole instead of the rectangular window, but the porthole is still behind the bed. The porthole rooms also feature a different color palette and seating area.

Depending on the stateroom you book, your ocean-view cabin will fit anywhere from two to five cruisers.

The balcony staterooms are your best bet for the most comfort and style without upgrading to a suite. The color palette and design scheme is still the same, but you get extra floor space, a seating area, bar area, entertainment space and, of course, a balcony. Floor-to-ceiling glass doors line one wall of your cabin, for uninterrupted views, and a furnished balcony with two seats and a table offers private outdoor living space.

Penthouses range in size, from 402 square feet to 584 square feet, with balconies ranging from 96 square feet to 238 square feet. Penthouses can sleep between three and five cruises. They typically include multiple sleeping areas, separate living and dining spaces, outdoor space and special amenities such as jacuzzi tubs and butler service.

The owners suites can accommodate five cruisers and each owners suite is 835 square feet with a 353-square-foot balcony. Owners suites include bedrooms, living rooms and dining rooms, along with hot tubs and soaking tubs.

As far as decor, suites are slightly more upgraded, compared to the staterooms, with darker color palettes that lend the spaces a more elegant look.

Norwegian Sky offers a selection of both complementary and for-a-fee dining options. Most cruisers will likely want to try some of the for-a-fee restaurants during their cruise, for more variety, but, even if you do not, you’ll still find plenty to keep you fed otherwise.

The ship’s complimentary dining restaurants include:

You can also order room service, but do note that, while room service is technically free, you’ll still pay a service fee and gratuities. If you want to explore the culinary offerings on the ship beyond these six options, check out the for-a-fee restaurants, including:

While Norwegian Sky may not have as many restaurants overall as some of the other ships in the Norwegian fleet, given the ship’s often short itineraries, you’ll find plenty to enjoy during your cruise.

Similarly to the ship’s restaurant line up, Norwegian Sky doesn’t boast as many bars and lounges as you’ll see on some Norwegian Cruise Line ships. However, that doesn’t mean you won’t find a good variety of watering hole options. You’ll find:

In terms of activities and entertainment, while Norwegian Sky doesn’t offer all the fanciest features, from race tracks to VR hubs to surfing simulators, that you might find on the newest, latest and greatest ships, it still provides plenty to keep cruisers happy.

Whether you’re a traveling family with the kids in tow or a couple looking for a few ways to have fun between relaxing and visiting the on-board bars, here’s what you can expect during a Norwegian Sky cruise.

While many cruise ships offer Broadway-style performances in their theaters, that’s not what you’ll get on Norwegian Sky. Instead, its entertainment is mostly relegated to music and live music shows.

For example, there’s a highly-produced tribute show featuring all your favorite rock classics. There’s also a competition-style show wherein audiences get to vote for their favorite performers.

Norwegian Sky boasts that it has two outdoor pools, five hot tubs and the longest poolside bar at sea. You can enjoy it all, whether you take a dip or you’d prefer to stay nice and dry on one of the many sun beds or deck chairs scattered across Deck 11.

Remember how Norwegian Sky ditched its casino briefly when it became Pride of Aloha? Well, that’s no longer the case and now you can find the Sky Casino situated on Deck 7, offering all your favorite table games and slots.

A Workout With a View

If you’d prefer to sweat out your stress versus getting it all massaged away, you can head to the ship’s fitness center, which is filled with all the requisite workout equipment. You’ll find your motivation to get in another set is high here, thanks to the great ocean views from the floor-to-ceiling windows.

On Deck 12, you can get in some fun in the sun without setting foot near the pool, thanks to the sports courts that include a basketball court and volleyball court. There’s also a jogging and walking track, on Deck 6, and a golf driving net.

No matter how old you are, you can enjoy a fun time at the ship’s video arcade on Deck 7.

A small selection of shops can also be found aboard Norwegian Sky, including a photo gallery and jewelry shop.

In addition to the children’s pool and children’s hot tub on Deck 12, Norwegian Sky also offers two specific kids venues, one for ages 5 to 12, Splash Academy, and one for teenagers. Programming keeps kids entertained in safe spaces designed for their age groups, so parents can feel good about enjoying a little alone time.

This ship may be small, but that hardly means it’s not a great time. With its short itineraries and bevy of shore excursions, the small size is just the right fit for most cruisers. See what upcoming cruises might be a good choice for your family, and experience Norwegian Sky for yourself.

How old is the Norwegian Sky cruise ship?

Norwegian Sky was ordered as, and intended to be, Costa Olympia, in 1993. However, the ship was finally delivered in 1999 as Norwegian Sky. It lived a short life as Pride of Aloha, before being reverted back to Norwegian Sky at a later date. The ship was completely refurbished in 2019.

Does Norwegian Sky have a casino?

Norwegian Sky started out with a casino, but the casino was removed when the ship was converted to Pride of Aloha. However, after the ship’s stint as Pride of Aloha, Norwegian Cruise Line added the casino back onto the ship, where it still lives today, on Deck 7.

Does Norwegian Sky have a water slide?

Norwegian Sky does not have a water slide, but it does have two outdoor pools, five hot tubs and the longest poolside bar at sea. It also offers a children’s pool and children’s hot tub on Deck 12. 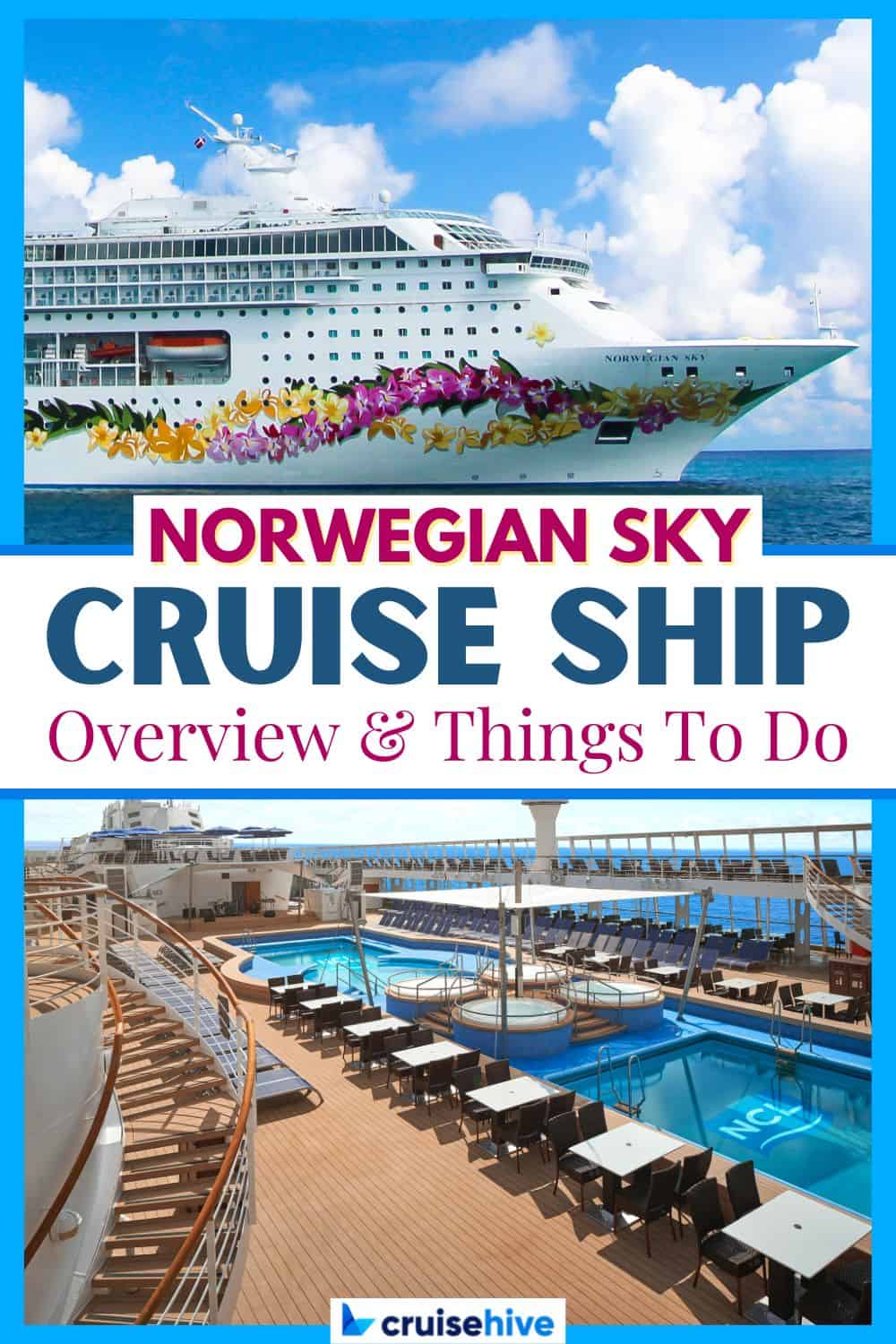