The first part of Norwegian Joy has started to take shape at the Meyer Werft shipyard in Papenburg, Germany. The ship which is being built for Norwegian Cruise Line will be the second Breakaway Plus Class and sister ship to Norwegian Escape.

A keel laying ceremony was held at the shipyard, a large block was lifted into the covered building hall and will be the first of 80 blocks. All the blocks will come together over time consisting of 168,800 gross tons.

“We are absolutely thrilled to celebrate the Keel Laying for Norwegian Joy today with our partners at Meyer Werft,”

“Norwegian Joy is yet another evolution for Norwegian Cruise Line and we know the outstanding work of the teams at Meyer Werft will truly make her a first class vessel.”

During the ceremony cruise line executives were present in the hall and laid the traditional “lucky coin,” before the first block, weighing 680 tons, was placed by a massive crane.

On March 31 there was a ceremony held for the Chinese purpose-built ship at the XingTian Temple at Fang Ta Park in Shanghai. Executives gathered for a traditional prayer and pledge ceremony to the Chinese Goddess of the sea, Mazu 媽祖, to bring blessings to the coins, the ship and all of the guests who sail on her.  The same coin was then placed under the block during the ceremony at Meyer Werft.

The Norwegian Joy which is also named 喜悦号 (Xǐ Yuè Hào) will be completed in Summer 2017. Just recently NCL revealed details about the ship’s onboard features including the first race track at sea. 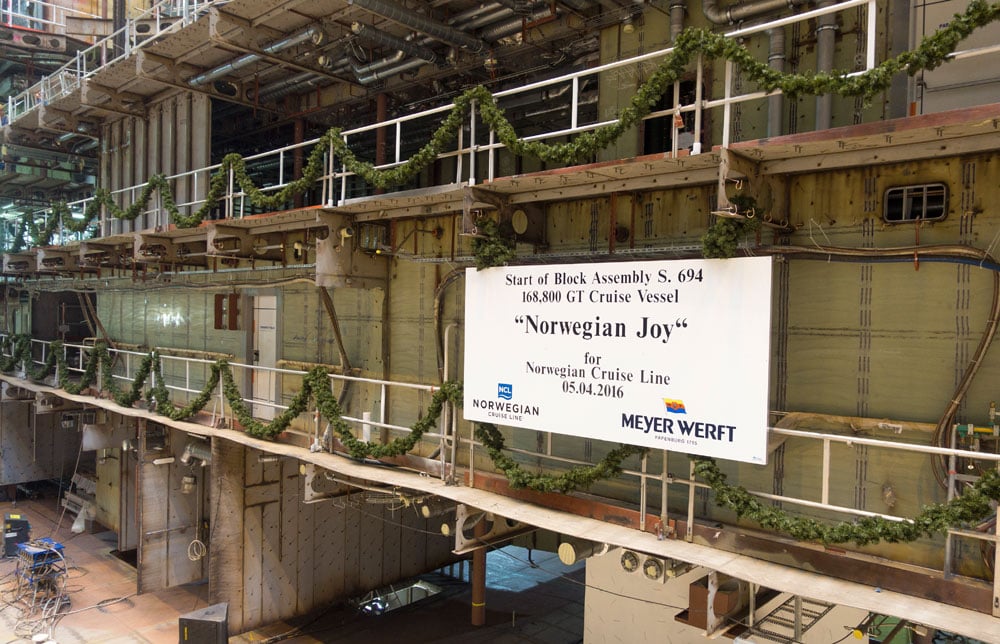