Norwegian Cruise Lines has announced its upcoming cruise ship the Norwegian Escape will offer the largest Aqua Park and Ropes Course at sea along with other expanded activities that the entire family can enjoy.

Once the ship is built-in November 2015 she will have the oceans largest ever ropes course which will also include a three-story multiplex of heart-pounding challenges complete with two six-inch wide planks beams that extend eight feet from the side of the ship. There will also be five Sky Rails, zip tracks that allow guests to soar through the air.

“Building on the tremendous success of our Breakaway-class ships, we are delivering bigger thrills and more action-packed activities for our largest ship to date,” said Drew Madsen, president and chief operating officer of Norwegian Cruise Line. “From the extraordinary Sky Rails on the expanded Ropes Course to the exciting Aqua Racer slide, guests sailing on Norwegian Escape will have the family adventure of a lifetime. We can’t wait for our guests to experience these incredible new activities.”

Norwegian Escape will also be bringing the largest Aqua Park at sea! NCL announced that it will include a new Aqua Racer slide, the newest tandem water slide at sea where competitors can race side-by-side on tubes as they twist and turn to the finish line.

Browse through a collection of renderings of what the spaces onboard will look like on Norwegian Escape:

If the images renderings are not enough to get you thinking about booking then the cruise line has also released a video to showcase all the new onboard features announced:

The expansive sports complex boasts a Teenage Mutant Ninja Turtle miniature golf course. Adding to the family fun, Norwegian Escape will also feature an expanded Kids’ Aqua Park; entertainment from Nickelodeon, the number-one entertainment brand for kids; along with the line’s first dedicated nursery for young cruisers two and under.

Some of the features can already be used on the Breakaway class ships but Norwegian Escape will evolve the features even further.

Norwegian Escape’s sports complex will also include a full-size basketball court for family-friendly competition and a new basketball ball court, a first for the line.

The ship is currently being constructed at the Meyer Werft shipyard in Papenburg, Germany and once completed will be 164,600 gross tons. The Norwegian Escape will be the first Breakaway plus class ship, a second named Norwegian Bliss will also be constructed. Once Escape enters service it is going to be sailing out of Miami, Florida and carrying 4,200 passengers. 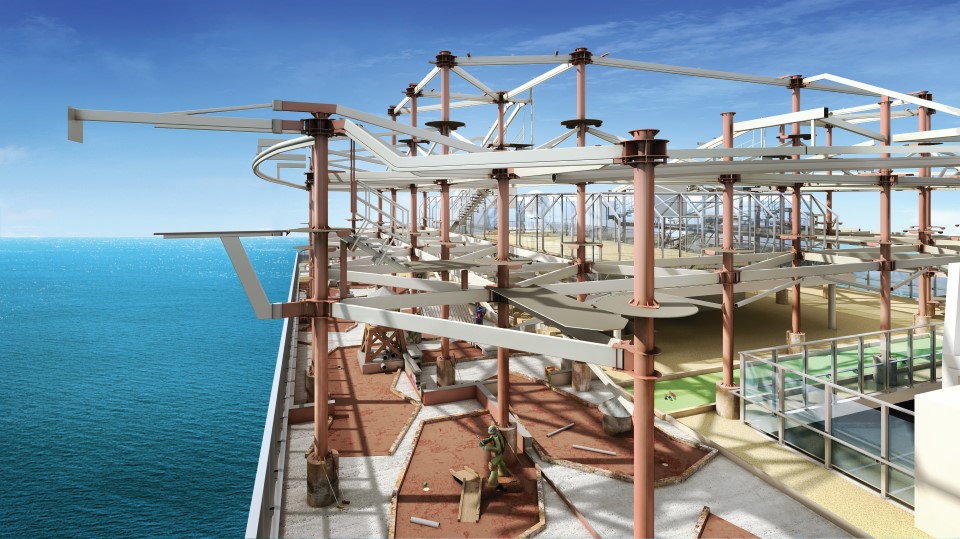