Norwegian Cruise Line has officially announced the cruise lines upcoming cruise ships home port. The largest ever vessel for NCL will sail out of Miami, Florida year round once it enters service in November 2015.

PortMiami is the cruising hub of the industry and NCL has recently just launched Norwegian Getaways year-round cruises from Miami. Now with Norwegian Escape also sailing from the Port it will increase the cruise lines presence in the region and will rival Carnival Cruise Lines and Royal Caribbean.

[quote_box_center]”Norwegian Escape’s arrival to Miami coincides with Norwegian Epic’s year-round Europe deployment, demonstrating the balanced approach we used to develop our winter 2015/16 deployment and ensuring that we had a varied offering of premium destinations that would be exciting to our guests,” said Kevin Sheehan, Norwegian’s chief executive officer. “Much of this deployment was designed based on feedback from our guests and travel partners, and we know they will be happy with the changes and enhancements we have made.”[/quote_box_center]

Norwegian Escape which will be the largest cruise ship in the fleet will be doing 7-day Eastern Caribbean cruises all year round calling at Tortola, British Virgin Islands; St. Thomas, U.S. Virgin Islands; and Nassau, Bahamas.

[quote_box_center]”PortMiami looks forward to welcoming Norwegian Escape in 2015?the ship will be a fabulous addition to our fleet,” said PortMiami Director Bill Johnson. “We are thrilled that this impressive vessel will make her debut at PortMiami– the Cruise Capital of the World?and will be the third Norwegian Cruise Line ship to home port here year round.”[/quote_box_center]

Norwegian Cruise Lines has also revealed the ships Hull Artwork which you can see in the main image at the top of this page. The artwork fits in well with the Miami style and looks like its part of the ocean. Its been designed by famed artist Guy Harvey who is recognized as the world’s finest marine wildlife artist and champion of ocean conservation.

[quote_box_center]”Guy Harvey is the perfect artist to design Norwegian Escape’s hull artwork because he is so passionate about the sea and his marine artwork is so life-like and well recognized,” said Kevin Sheehan, Norwegian Cruise Line’s chief executive officer. “We also appreciate how Guy is focused on ocean conservation and keeping the marine environment pristine, we plan to work with him to help support the Guy Harvey Ocean Foundation as that goes hand-in-hand with our company’s strong commitment to the environment.”[/quote_box_center]

The new artwork was revealed during the Cruise Shipping Miami convention which is one of the cruise industry highlights of the year where cruise line executives and cruise related professional discuss cruising trends.

Guy Harvey is a total marine person and anything he does is related to marine life. He lives in Grand Cayman which is a perfect place to explore the world underwater and his 1065 feet Norwegian Escape artwork is a great example.

[quote_box_center]”I am deeply honored to be asked by Norwegian to paint the hull of the newest and largest ship in their fleet,” said Harvey. “The larger than life paintings of popular but endangered marine creatures in the Caribbean will heighten public awareness about marine life. The large-scale mural demonstrates the concern and respect that Norwegian and I have for the marine environment through which this ship will travel over the years.”[/quote_box_center]

Norwegian Escape is currently being built at the Meyer Werft shipyard on Papenburg, Germany and when completed it will 163,000 tons making it the cruise lines largest ever cruise ship. It will carry 4,200 passengers and is expected to enter service in October 2015.

What do you think of the new Hull Artwork? Let us know in the comments below. 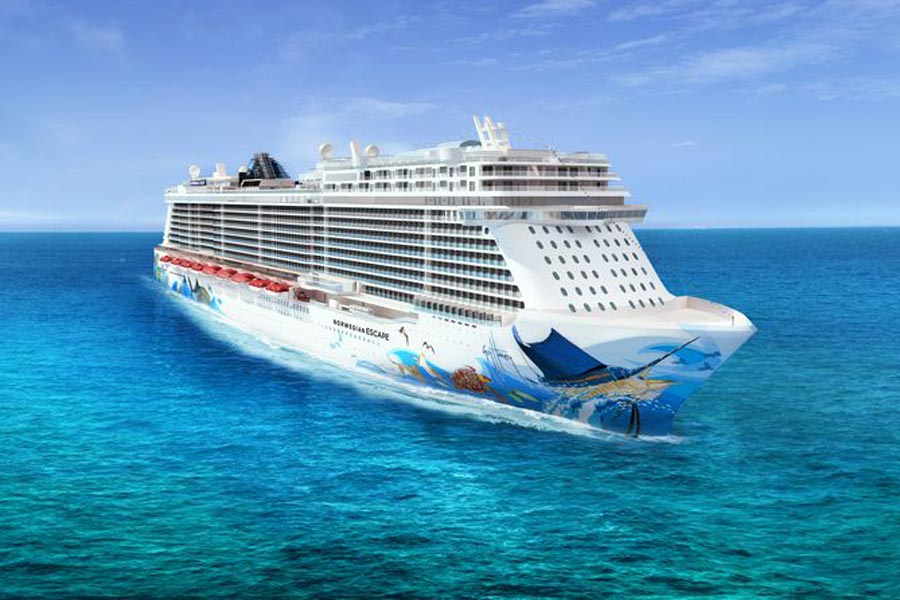