Norwegian Escape, soon to be the largest ship in the Norwegian Cruise Line fleet, departed Meyer Werft in Papenburg, Germany on Friday, September 18 for her approximately 24-hour long conveyance along the Ems River.

Norwegian Escape’s river conveyance marks another key milestone in the ship’s highly anticipated delivery. Measuring 1069 feet long and 136 feet wide, the ship is the first in the line’s Breakaway Plus class. Three additional ships in the class are on order at Meyer Werft.

“After seeing firsthand this week how spectacular Norwegian Escape already looks, I am thrilled that she is officially on her journey to welcome guests next month,” said Andy Stuart, president and chief operating officer of Norwegian Cruise Line. “As the first Breakaway Plus class ship, she will offer the very best in freedom and flexibility for our guests and we cannot wait to officially welcome her to the fleet.”

Sailing backwards, Norwegian Escape left Meyer Werft at approximately 2:00 pm (local time in Germany), and made a narrow passage through the ship yard’s locks, with only 1.2 meters clearance separating the ship from the “bumpers” that were specially installed along the starboard side of the locks. This very careful maneuver took approximately 2 hours at a maximum speed of only 0.2 knots. The precise navigation included a team of two located on the bridge, with one navigation officer in charge of overseeing the bow maneuvers and the other overseeing the movement of the stern, led by experience River Ems pilots.

After passing through the locks, Norwegian Escape continued along the river, stern first. Due to the strong propulsion in the aft section of the vessel, traveling stern first helps with maneuverability, which is a key component when navigating the vessel through such narrow passages.

Before reaching her final destination in Eemshaven, Netherlands at approximately 12:30 pm (local time in Germany) on Saturday, September 19, Norwegian Escape will pass through additional narrow passages including the Weener Bridge in Weener; Jann-Berghaus Bridge in Leer; and Ems-Barrier in Gandersum. Once the ship reaches Eemshaven, she will take on additional provisions and materials to welcome guests in late October, before heading toward the North Sea for sea trials later this month.

Norwegian Escape, soon to be the largest ship in the Norwegian Cruise Line fleet, will sail weekly seven-day cruises from her year-round homeport of Miami to the Eastern Caribbean beginning on November 14, 2015. The 164,600 gross ton ship will be the largest ever to home port year-round in Miami, carrying 4,200 guests to tropical Caribbean destinations including St. Thomas, U.S. Virgin Islands; Tortola, British Virgin Islands and Nassau, Bahamas. 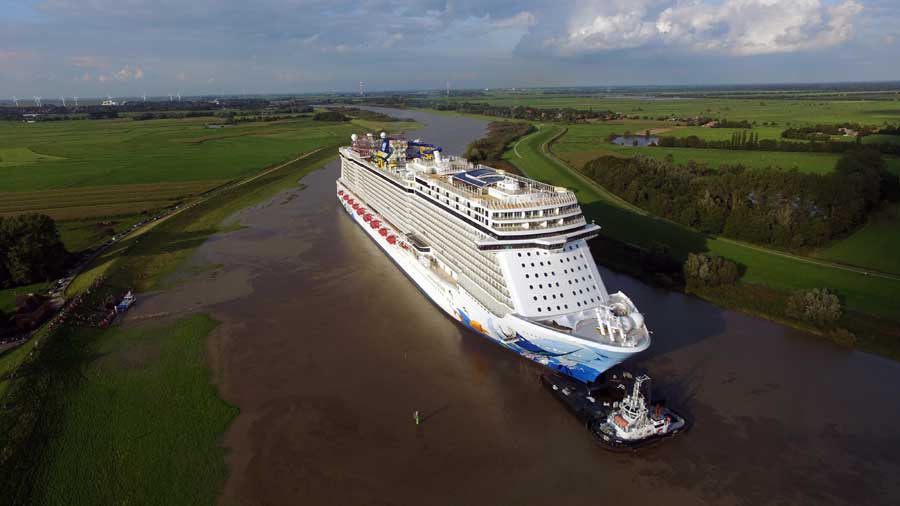