Norwegian Epic Back in Action after 3-Week Refurbishment

The Norwegian Epic is back in action after a three-week refurbishment which has added a ton of new features and services ready for its Barcelona deployment. The new improvements include entertainment, dining, technical operations and a total refresh of many areas around the ship.

So let’s take a look at some of the Norwegian Epic’s enhancements announced by NCL which guests can now enjoy onboard:

There is a new Cavern Club which has been inspired by the original Cavern Club in Liverpool which hosted legendary band the Beatles. A new Broadway musical show called Priscilla Queen of the Desert will be enjoyed by guests. the new Tony Award winning musical features a dazzling array of over 500 award-winning costumes, 200 extraordinary head-dresses and a hit parade of dance floor favorites, including “It’s Raining Men,” “I Will Survive,” and “Girls Just Wanna Have Fun.”

Guests looking for a “cool” adventure can tee up at the new SplashGolf™, which was installed in the ship’s Kids Aqua Park.  This new attraction combines two age-old elements of fun –water features and mini golf— into one completely new, interactive water based game attracting all age groups for more family fun.

“Norwegian Epic’s extended dry dock has given us the opportunity to not only enhance the ship’s public spaces but to add significant new features, including a brand new Tony Award-winning musical with Priscilla Queen of the Desert, a new entertainment venue with The Cavern Club and new activities like SplashGolf, We continue to heavily invest in our current fleet, to ensure that guests have a consistent experience across all Norwegian ships and the freedom and flexibility to create their ideal cruise vacation.”

Many hotel departments onboard have been enhanced including to the Mandara spa, Bliss Ultra Lounge, pool deck Marketplace, Epic Theater, Casino, and the exclusive Haven suite complex; including new lighting fixtures, artwork, wall covering, furniture and more. Also as is general when it comes to a refurbishment the ship received improvements to technical aspects including a new pair of “Becker rudders” together with more efficient propeller caps, and state-of-the-art energy efficient hull paint. Additional significant technical and safety updates include: lifeboats and tender boats release systems upgrade; thrusters and stabilizers full maintenance, air ducts upgrades as well as improved storerooms’ refrigeration systems.

The Norwegian Epic is all set to offer all the new upgrades when the Winter season starts. The 153,000 gross ton ship will begin sailing Mediterranean cruises from Barcelona Spain on October 25 and then sail from Port Canaveral, Florida towards the end of 2016. 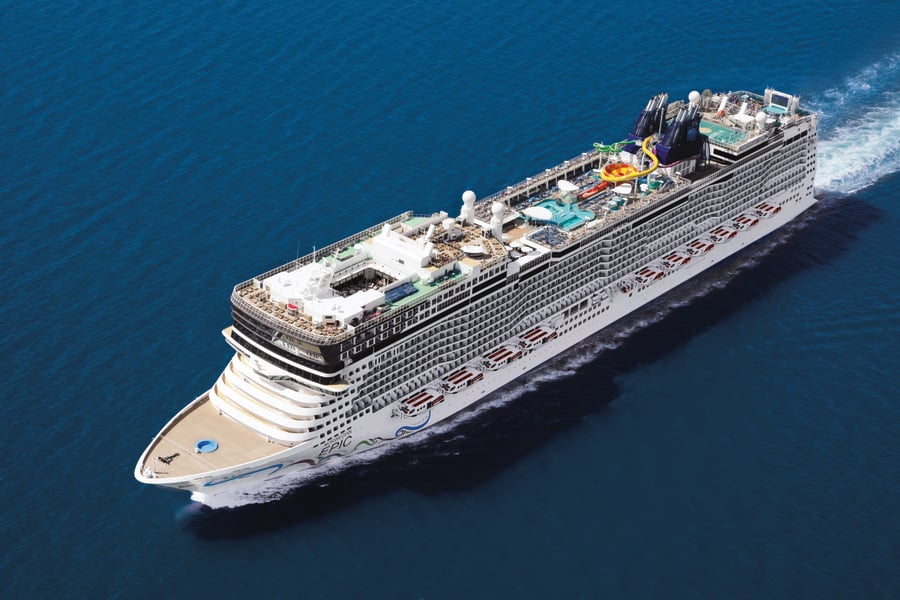