Norwegian Encore to Feature the Largest Race Track at Sea

Norwegian Cruise Line has revealed further details about Norwegian Encore, the next new NCL Breakaway-plus class ship arriving in 2019. The ship will have new entertainment offerings, the largest racetrack at sea and a new virtual reality complex.

Norwegian Cruise Line has released new details about Norwegian Encore which will be the next new NCL ship arriving in 2019. One of the biggest highlights onboard will be the largest race track at sea, even bigger than sister ships Norwegian Joy and Norwegian Bliss. There will be a new Tony Award Winning Broadway Musical, a new Virtual Reality complex and a Laser tag Arena which was introduced on Norwegian Bliss.

All the new details were announced as the cruise line celebrated the keel laying ceremony which was held at the Meyer Werft shipyard in Papenburg, Germany. This is a major construction milestone but still a while to go with all the large blocks coming together to make the ship as one.

“Norwegian Encore’s keel laying ceremony was not only special because we crossed a key construction milestone, but because we celebrated the incredible partnership we have had with the Meyer Werft team – a team of talented individuals who have built some of our most innovative ships.”

“Today’s surprise ‘Kinky Boots’ performance showcases the evolution of the meaningful and unforgettable experiences we are dedicated to providing our guests. We are very excited to be the first to feature this award-winning musical at sea.”

One of the biggest and most anticipated new features will be the largest race track at sea, an evolution of the ones featured on other Breakaway-plus sister ships. The two-level track will be almost 1,125 feet with ten exhilarating turns and four points that extend up to 13 feet over the side of the ship. NCL is going even further with a viewing area located at the middle of the track where guests can provide passing go-karts with an additional turbo boost by tagging them with a laser beam.

This will be an open-air laser tag arena of the lost city of Atlantis. The arena will have added elements and more exciting interactive experiences than sister ship Norwegian Bliss.

The future Norwegian cruise ship will feature a large Aqua Park just like Breakaway and Breakaway-Plus class vessels. The park will feature two multi-story waterslides, one of which extends 11 feet over the edge of the ship and loops down to the deck below.

The ship will introduce a new shoe named “Kinky Boots.” The new Tony Award Winning Broadway Musical will feature original songs by Cyndi Lauper. Norwegian Encore will have even more offerings which are already on other NCL ships including “Happy Hour Prohibition: The Musical” from Norwegian Bliss and “The Choir of Man,” which recently debuted on Norwegian Escape.

Use the widget below to check cruise prices for Norwegian Encore:

At approximately 169,000 gross tons and accommodating up to 4,000 guests, Norwegian Encore will cruise out of Miami every Sunday and sail seven-day voyages to the Eastern Caribbean, beginning with her first journey on November 17, 2019 through April 12, 2020. 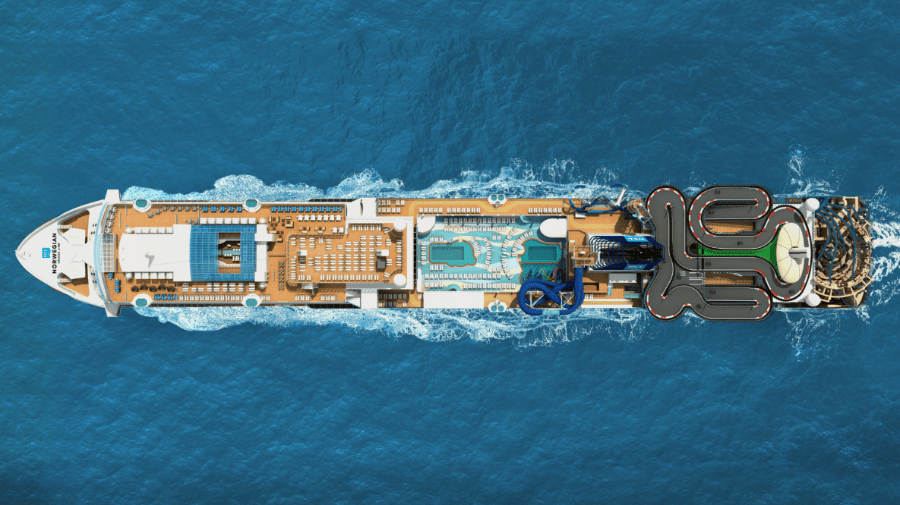 Genting Files for Bankruptcy, What’s Next for its Cruise Brands?