Norwegian Dawn Freed After Loosing Power And Running Aground

After checking the Norwegian Dawn for any type of damage on Wednesday, May 20th and correcting the steering malfunction the vessel has been cleared to depart Bermuda. The vessel will continue to sail to Boston where it’s scheduled to arrive as stated in the normal itinerary on Friday. The next voyage is also expected to go ahead as scheduled. NCL have also given all passengers on the current cruise a 15% credit towards a future voyage.

You can read the full statement sent to Cruise Hive from Senior Director of Public Relations, Jason Lasecki:

On Wednesday, May 20, a thorough assessment of Norwegian Dawn was completed by Norwegian’s technical operations team, an independent dive team, and DNVGL inspectors, representing the ship’s classification society, while the ship was alongside in Heritage Warf, Bermuda.  The team confirmed the structural integrity of the ship and the technical issue which caused the steering malfunction was identified and corrected.  The ship is expected to be cleared to depart Bermuda at 3pm ADT today and resume sailing to Boston, and is expected to arrive on Friday as scheduled. Norwegian Dawn’s next voyage will depart as scheduled on May 22.

We sincerely apologize for the inconvenience and greatly appreciate our guests’ understanding.  All guests sailing on the current voyage will receive a future cruise credit of 15% of their cruise fare to use towards a future Norwegian cruise.

On Wednesday morning the Norwegian Dawn docked at Heritage Wharf in Bermuda. NCL have allowed guests to go ashore along with enjoying the ship’s services and amenities. In the statement below the cruise line also mentions that an assessment is underway by DNVGL inspections and divers. Norwegian Cruise Line will inform Cruise Hive of any more updates.

As of 7am on Wednesday, May 20‎, Norwegian Dawn docked alongside at Heritage Wharf in Bermuda.

Norwegian’s officers, engineers and lead technical teams, along with DNVGL inspectors, representing the ship’s classification society and a team of independent divers, are working on a complete assessment of the vessel. The ship is fully operational and guests are enjoying all onboard amenities and services. In addition, guests have the opportunity go ashore to enjoy the island this morning.

More bad news for Norwegian Cruise Line as the Norwegian Dawn lost power and run aground on Tuesday, May 19th.

The Norwegian Dawn was sailing from Bermuda to Boston when it had temporary malfunction of its steering system at around 5 pm on Tuesday evening. The ship then sailed slightly of course which then ran aground by making contact with the oceans sea bed. At the time the 90,000 gross ton vessel was only 3 miles from Bermuda in the Atlantic ocean. NCL states a brief power loss onboard is to blame for the steering malfunction.

Here is the latest statement sent to us from Norwegian Cruise Line:

On Tuesday, May 19th at approximately 5:00 pm ET, Norwegian Dawn had a temporary malfunction of its steering system, causing the ship to sail slightly off course as the ship was departing Bermuda, resulting in the vessel making contact with the sea bed.  All guests and crew are safe and there were absolutely no injuries.

The ship’s officers, engineers and an independent dive team have confirmed the structural integrity of the ship.   With high-tide this evening, the ship was floated and moved to a nearby anchorage position where it will remain overnight.  The ship will be thoroughly inspected in Bermuda by DNVGL, the ship’s classification society, before returning to Boston.  The ship is fully operational with the full complement of onboard services available to guests.

The ship is sailing on a seven-night Boston to Bermuda cruise with 2,443 passengers and 1,059 crew.

All 2,443 passengers and the 1,059 crew members were safe with full services and entertainment always available for guests. The Norwegian Dawn was on top of a coral reef and many passengers went to the open decks to see what’s going on. Here is a video that was posted not long after the incident happened:

Thankfully high tide then re-floated the large cruise ship which was then positioned to a nearby place where the anchor could be dropped. Norwegian Dawn remained in that position overnight and the Bermuda DNVGL have been inspecting the vessel. If the inspection goes well the NCL ship will continue to its homeport at Boston. No details on any itinerary changes at the moment but Cruise Hive will keep updating this post with the latest details on this developing story.

#Norwegiandawn Bright lights under the bow, with one of the dive boats. pic.twitter.com/UylknsZ0vj — Jay (@ThatCantB_Right) May 19, 2015

The Captain announced a few minutes ago that after a 2nd attempt we are now free of the reef and now anchored…. Norwegiandawn

The Norwegian Dawn set sail from Boston, Massachusetts on May 15th for a 7-day Bermuda round cruise which is expected to end on May 22nd. This news comes just days after a young girl drowned onboard the Norwegian Gem and not long after the cruise lines announced that food trays are no longer allowed around the ship. 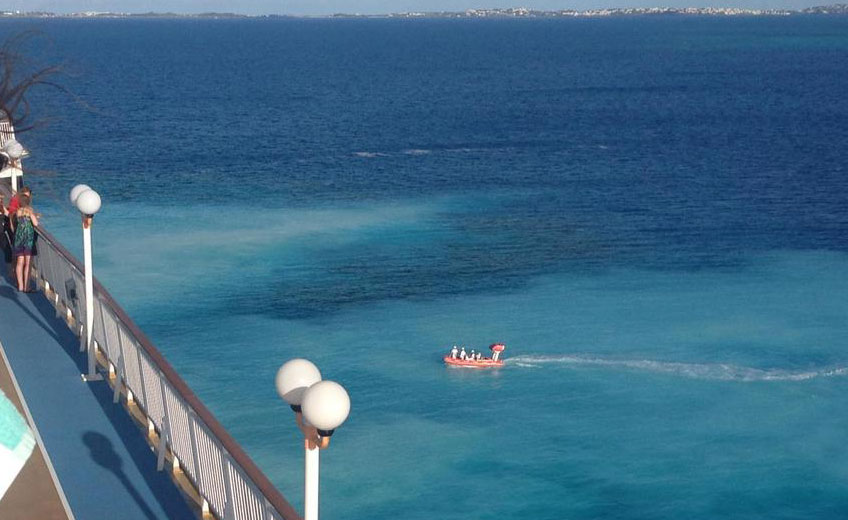