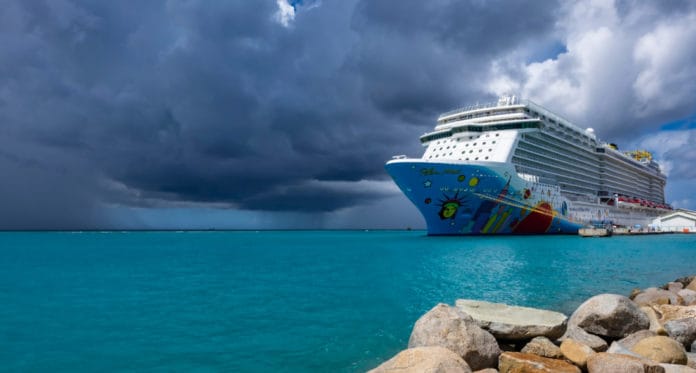 Norwegian Breakaway has been forced to remain overnight at San Juan, Puerto Rico due to Tropical Storm Karen.

The Norwegian Breakaway cruise ship has been forced to remain overnight in San Juan, Puerto Rico due to Tropical Storm Karen. The large vessel apparently won’t be departing until 6:00 PM on Wednesday, September 25.

The San Juan port also anticipated the possibility of gale forces winds from the storm with Port Condition ZULU from Monday at 8:00 PM. With the storm producing high ocean swells and tricky sea conditions the cruise ship would have to deal with this if she departed as scheduled. Having said that, with port condition ZULU it does mean no marine traffic is allowed in or out of the port.

Norwegian Breakaway was also scheduled to call at St. Thomas in the U.S. Virgin Islands today and this call would now be delayed or even canceled by remaining in San Juan until 6:00 PM.

Norwegian Breakaway is 145,600 gross tons with a guest capacity of over 3,900 at double occupancy. Do always keep checking from NCL regarding any departures to make sure there are no itinerary changes due to hurricanes or tropical storms.

According to the National Hurricane Center (NOAA) the storm currently has maximum sustained winds of 45 MPH and is moving north at 14 MPH. It is currently located 155 miles north of San Juan, Puerto Rico which will no doubt be causing rough sea conditions for the Caribbean island.