Norwegian Cruise Line's newest cruise ship has departed the Meyer Werft shipyard for its conveyance up the Ems River towards the North Sea. Norwegian Bliss is just 2 months away from debuting in Seattle, Washington!

Norwegian Cruise Line’s newest cruise ship Norwegian Bliss has departed the shipyard for the very first time and reaching a major milestone. The large vessel is closer to being completed and handed over to the cruise line so that cruises can begin.

The latest NCL cruise ship has finally departed the Meyer Werft shipyard and beginning its conveyance on the Ems River in Papenburg, Germany towards the North Sea. Norwegian Bliss started its trip along the river last night from Meyer Werft and on March 14 is arriving in Eemshaven, Netherlands.

The conveyance is a long and tricky process done by many cruise ships in the past. Norwegian Bliss went in reverse through the shipyard sea lock which took 2 hours due to a careful maneuver with just four feet clearance. The entire process takes a while and involves Ems River pilots, navigation officers, the yard captain and the local German waterway authorities. The journey also included the Friesenbrücke Bridge in Weener; Jann Berghaus Bridge in Leer; and Ems-Barrier in Gandersum.

“Today marks another historical moment for Norwegian Bliss, the most highly anticipated ship of the Norwegian Breakaway Plus class, the most successful class of our company’s history”

“When she arrives into Seattle in June, guests will be excited to experience many new first-at-sea activities, including the largest two-level race track at sea, new dining experiences, such as Q Texas Smokehouse and Coco’s a chocolate and treat shop, the Tony Award-Winning Broadway Show Jersey Boys and much more for guests to explore.”

As a bonus for you all we thought this breathtaking drone footage of Norwegian Bliss on the day of conveyance will put a smile on your face, enjoy:

You’re probably wondering what’s next for Norwegian Bliss? Now that the ship has departed Meyer Werft it will move into the final phase which includes further testing, sea trials and the arrival of crew members.

Once these final steps in preparing the new cruise ship for passengers are complete Norwegian Cruise Line will take delivery of the Third Breakaway-Plus class ship from Meyer Werft on April 19, 2018, in a handover ceremony which will take place in Bremerhaven, Germany.

Norwegian Bliss will then begin her passage across the Atlantic Ocean on April 21 and will arrive to the US on May 3, where she will begin her inaugural tour, the most extensive of any ship in Norwegian Cruise Line history.  Events will take place in New York City, Miami, and Los Angeles, and then will conclude with a christening ceremony on May 30 at the new Pier 66 at the Port of Seattle in Washington State, followed by her inaugural cruise.

Following the preview events and christening, Norwegian Bliss will offer cruises to Alaska beginning June 2.  She will spend her summer sailing seven-day cruises to Alaska, and fall season cruising to the Mexican Riviera from Los Angeles.  In winter of 2018 she will sail to the Caribbean from Miami, and in the 2019 fall/winter season she will cruise from New York City to Florida, the Bahamas and Caribbean. 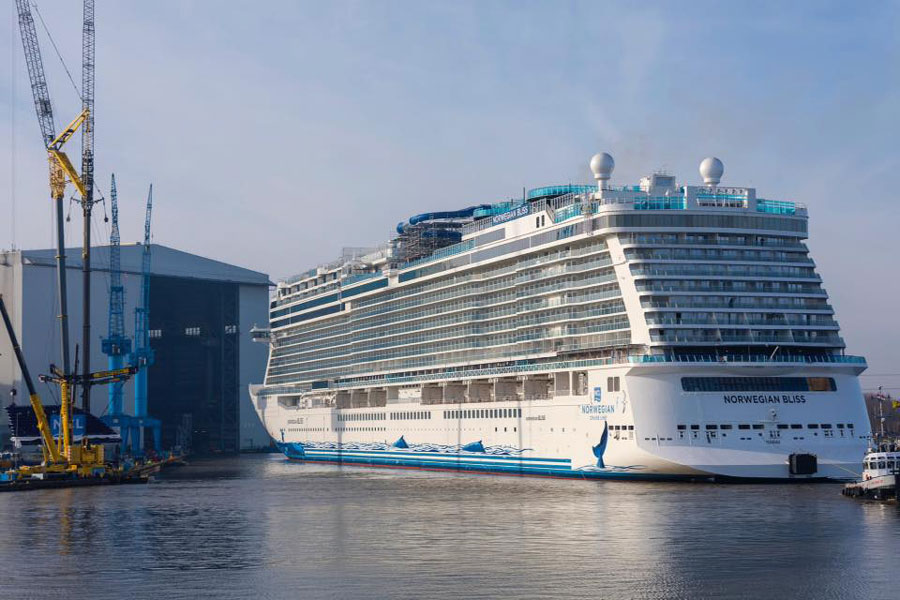