According to a paper published by Macquarie Financial Services, reported by Barrons, it is unlikely that cruising would resume next month.
Read more
Ports

While the cruise industry awaits a decision on the No-Sail-Order for December, the CDC still recommends that travelers defer all cruise travel worldwide.
Read more

The agreement between the two companies will be for two large Breakaway Plus class vessels. The first ship will be built by the second half of 2018 and then the second by the end of 2019.

“Norwegian Breakaway and Norwegian Getaway have proven themselves as industry game-changers and are extremely popular with our guests,” said Kevin Sheehan, Norwegian Cruise Line’s chief executive officer. “It was only natural that we build on their success with this new ship order that further solidifies our long-term growth strategy.”

The Breakaway Plus ships will be a large 164,600 gross tonnage and carry 4,200 passengers. Both ships are to cost 1.6 Billion Euros and NCL has the financing already in place.

“We are thrilled that Norwegian Cruise Line has the continued confidence in MEYER WERFT to expand their fleet,” said Bernard Meyer, managing partner of MEYER WERFT. “We are very proud of our longstanding relationship with Norwegian.”

Norwegian Cruise Line has already ordered two Breakaway Plus class ships. The first ship Norwegian Escape is set to be delivered to the cruise line by Meyer Werft in October 2015 and then Norwegian Bliss in March 2017. Both ships are being constructed by Meyer Werft in Papenburg, Germany.

The two new ships just ordered will be slightly larger and will carry more passengers. It was rumored that NCL would order two 200,000 ton cruise ships if the Meyer Werft purchase of the Turku shipyard in Finland went through. Now we will be getting another two Breakaway Plus class ships instead.

NCL have not yet released any more details but the ships names, itineraries and of course the hull artwork is all still to come. 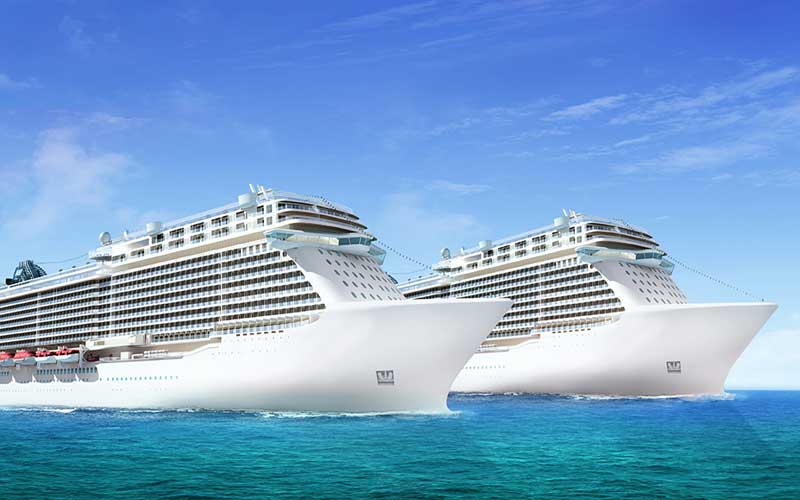