Norwegian Cruise Line has christened their newest cruise ship in Seattle, Washington. Norwegian Bliss arrived at her new Summer homeport to kick off new cruises and become the new flagship of the NCL fleet.

One of the biggest and best new cruise ships of 2018 has finally been christened at her new Summer homeport in Seattle, Washington. After cruising the U.S. for a month with calls in New York, Miami and Los Angeles Norwegian Bliss can finally begin regular cruises from Pier 66 at Port of Seattle.

A ceremony was held onboard the new ship on Wednesday and Morning Show radio host Elvis Duran played a major part of the festivities as the ship’s godfather. The main naming event took place in the 900-seat Bliss Theater but it was also streamed throughout the vessel to nearly 2,400 people. There were traditional blessings and the symbolic bottle break across the ship’s hull too.

“Norwegian Cruise Line has been cruising out of the Port of Seattle for eighteen years, and the public-private investment that made the enhancement of Bell Street Cruise Terminal at Pier 66 possible, demonstrates the commitment we have to the city of Seattle.”

“This month, Norwegian celebrates twenty-four years of cruising to Alaska, and with Norwegian Bliss joining our Alaska fleet we will have the largest capacity in our history, offering guests more options to experience the majesty of that destination.”

Following a preview sailing from May 30 – June 2, Norwegian Bliss will commence her inaugural summer season with 7-day cruises to Alaska including calls in Ketchikan, Skagway, Juneau and Victoria, British Colombia beginning June 2. She will join Norwegian Jewel and Norwegian Pearl as the youngest fleet ever to cruise to Alaska.

“The Port of Seattle is thrilled to host the magnificent Norwegian Bliss and her passengers for many Alaska cruise seasons to come.”

“Cruise ships like Norwegian Bliss meet our objectives of increasing economic opportunity in our region while constantly raising the bar on environmental sustainability.  We thank Norwegian for their eighteen years of partnership with the Port of Seattle, and look forward to many more to come.”

The third Breakaway Plus class ship will sail from Los Angeles starting in October with Mexican Riviera sailings. The ship will offer even more choice to more cruisers with Eastern Caribbean cruises from PortMiami for the Winter season. Then in 2019 Norwegian Bliss will sail from New York with calls to the Bahamas, Florida and the Caribbean.

The new Norwegian Cruise Line ship is 168,028 gross tons and is able to carry 4,000 guests. She is the sister ship to Norwegian Escape and Norwegian Joy which is based out of China. 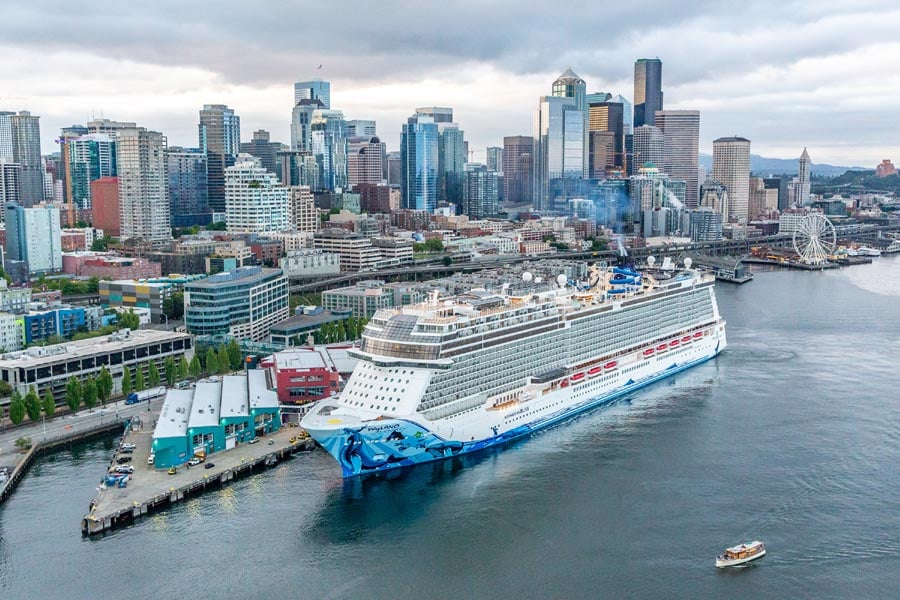