Norwegian Breakaway had to sail through a rough Winter Storm to get back to New York with a delayed arrival and angering passengers.

Winter Story Grayson or the nicknamed “Bomb Cyclone” has passed but not without impacting the Norwegian Breakaway cruise ship. The Norwegian Cruise Line ship ended up sailing through the storm to make it back to its homeport in New York. The vessel is actually delayed and didn’t make its early morning arrival on Friday. There has also been some minor damage done to the ship as seen further on in this post.

For a while thought it might become the Norwegian Break Apart #NorwegianBreakaway pic.twitter.com/3LEQMc9I6p

Norwegian Breakaway sailed through rough sea conditions due to the Winter Storm which has been hitting the U.S. East Coast with arctic temperatures, high ocean swells, and heavy snow.

Now the ship is back docked at the New York cruise terminal more images are starting to make their way online of minor damage.

Angry passengers who were onboard the NCL ship posted on social media what they had to go through while the ship was leaking water and listing from side to side. Relatives also posted online worrying about those onboard the ship which was sailing through terrible sea conditions.

#NorwegianBreakaway @CruiseNorwegian it’s nice that we just found out on FACEBOOK that our arrival into NY will be delayed, why can’t @CruiseNorwegian inform its passengers on the ship! SHAME ON YOU, make an announcement, demand you take action on these actions….

Where is my grandmother?? @CruiseNorwegian. The boat was suppose to dock at 8am today. It's now 6:45pm. This is what happens when you decide to sail thru #Graysonstorm and not wait out the storm like the other cruise lines did. #NorwegianBreakaway

Never again on the #NorwegianBreakaway. That was the scariest cruise ever. All we knew was tenders couldn't make it to NCL private island. Then we just left, no information, no updates, 3+ days of rough waves, and entire family sick, locked inside a tilted ship. Disgraceful….. pic.twitter.com/5ecdPtTrlc

Norwegian Cruise Line had posted a statement yesterday warning of the late arrival into New York but has now posted another with new details for the next scheduled cruise which was supposed to depart the port yesterday, Jan 5 for a 14-night Caribbean cruise. That voyage will now sail a revised itinerary and depart today at 3 PM.

Read the full statement from NCL:

Due to winter storm Grayson, Norwegian Breakaway will have a delayed arrival into New York today. As a result, Norwegian Breakaway’s 14-day cruise that was originally scheduled to depart on January 5 will now depart on Saturday, January 6 at 3 pm. Due to the ship’s late arrival today and the ongoing weather situation, embarking guests are encouraged to arrive to the pier on Saturday morning; all guests must be onboard by 1 pm on January 6. Guests unable to adjust their travel plans are welcome to board on Friday evening, between 6 pm and 10 pm.

The ship will now sail a slightly adjusted itinerary, which will be communicated to guests onboard. All guests will receive a refund of one day of their cruise fare, in the form of an onboard credit. We sincerely thank our guests for their understanding of this unexpected change due to the weather and apologize to our guests for any disruption to their schedule. Any further updates will be posted on NCL.com.

Even though the cruise line has been updating with new details online guests on Norwegian Breakaway had suffered the harsh sea conditions from the Winter Storm Grayson. Below is a video posted which shows the high winds and ocean swells.

In another post on Twitter, water can be seen dripping near the stairwells on deck 6 as housekeeping staff is hard at work trying to limit the damage. Flooded water was also located in other parts of the vessel.

Good to be back on dry land. Here’s a video of water pouring down the staircases on the Norwegian Breakaway on Wednesday night: pic.twitter.com/rBQszLB5qi

The reaction from passengers towards the ship’s captain hasn’t been so good and according to many posting on social media sites, the lack of communication was not good enough.

Norwegian Breakaway is a 144,000 gross ton vessel and is based out of New York offering cruises to the Caribbean. Cruise Hive will keep readers updated on any new developments. 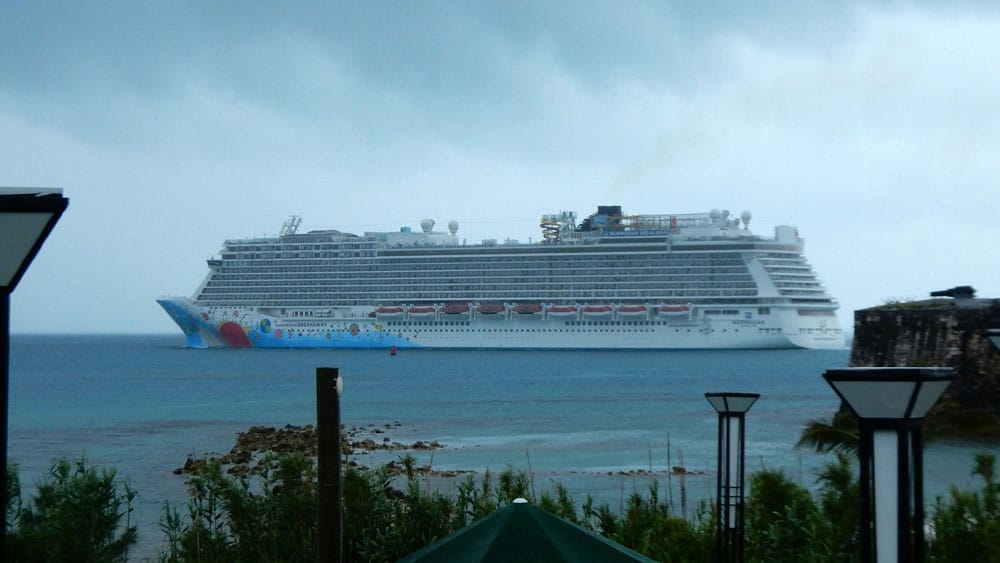