Norwegian Bliss To Sail Winter Season Out Of Miami, Florida

Norwegian Cruise Line has announced its upcoming cruise ship the Norwegian Bliss will not only be based out of Seattle but also in Miami for the Winter season.

Norwegian Bliss which is still currently under construction will begin sailing from Miami after its inaugural season in Alaska. The Breakaway Plus class vessel will start its new season from the PortMiami in Florida on November 17, 2017. The ship will sail 7-day Eastern Caribbean cruises departing every Saturday from Miami.

“We are incredibly excited to announce that we are once again bringing our newest and most innovative ship to Miami, with the arrival of Norwegian Bliss in November 2018.”

“As the Caribbean is our most sought-after winter destination, there was no question that Norwegian Bliss would sail from Miami. This incredibly dynamic ship will offer stunning ocean views from almost every venue, spacious and thoughtfully designed accommodations that fit with every cruiser’s needs, and a variety of exciting and engaging venues that will continue Norwegian’s history of innovation in providing the ultimate dining and entertainment experiences at sea.”

Norwegian Bliss will call in St. Thomas, US Virgin Islands; Tortola, British Virgin Islands and Nassau, Bahamas as part of the 7-day itinerary. Before the ship begins its new Winter deployment from the Sunshine State it will be sailing a repositioning cruise from Vancouver.

“PortMiami is proud to be recognized as the Cruise Capital of the World, welcoming more passengers than any other port in the world.”

“I welcome Norwegian Cruise Line’s continued growth in Miami-Dade County.  Cruise lines and their passengers are vital to the continual economic growth and development of the tourism industry in our community.  We look forward to welcoming the Norwegian Bliss in Winter 2018.”

For those looking for a once-in-a-lifetime cruise experience, Norwegian Bliss will depart Los Angeles on November 3 for a 14-day journey to Miami through the new locks of the recently expanded Panama Canal, with calls in Puerto Vallarta and Manzanillo, Mexico; Puerto Quetzal, Guatemala; Puntarenas (Puerto Caldera), Costa Rica; and Cartagena, Colombia.

“Norwegian has been breaking the boundaries of traditional cruising for 50 years.” “We couldn’t be prouder to be the homeport of the Norwegian Bliss, the cruise line’s sixteenth ship. We are grateful to Norwegian for entrusting PortMiami with its newest and most innovative ship. We truly look forward to the ship’s arrival in 2018.”

Norwegian Bliss will be 167,800 gross tons and will carry around 4,000 guests. The ship is being constructed at the Meyer Werft shipyard in Papenburg, Germany and is scheduled to be delivered in Spring 2018. It will be sailing 7-day cruises in Alaska from Pier 66 in Seattle, Washington.

More details will be released about the ship over the coming months. 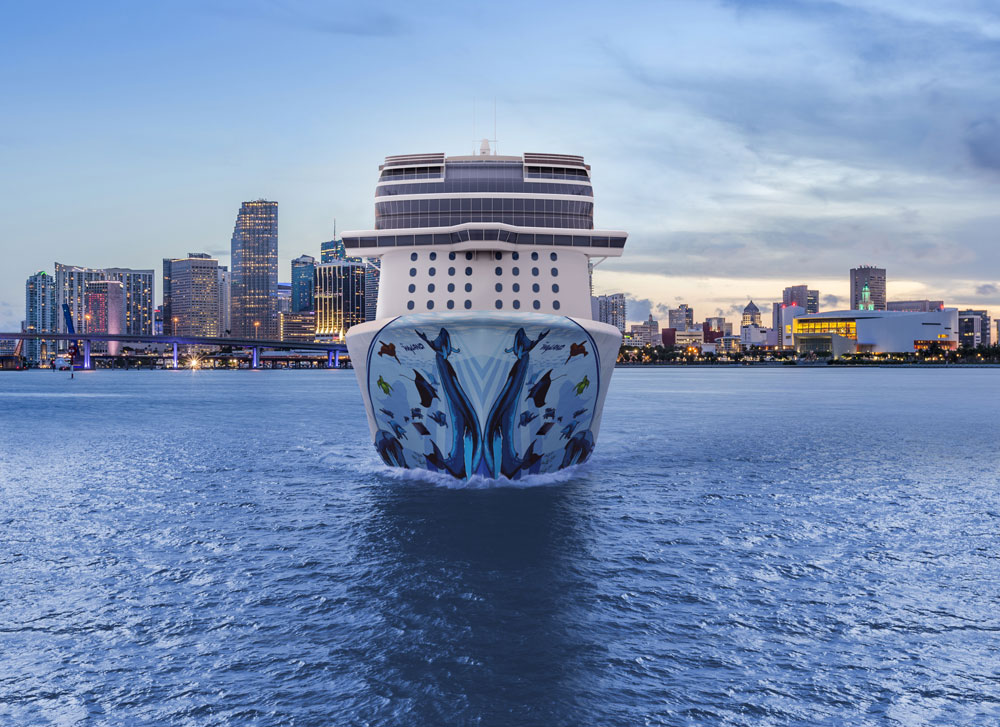