Norwegian Bliss To Sail Alaska Out Of Seattle From June 2018

Norwegian Cruise Line has announced that its upcoming cruise ship the Norwegian Bliss is to be custom-built for Alaska.

The next new ship for NCL will be based out of Seattle, Washington, the first ship the cruise line has debuted from the Emerald City. The announcement was made at Port of Seattle’s Pier 66 which is where the future ship will be based from June 2018.

“Norwegian was the first cruise line to begin cruising to Alaska from Seattle in 2000 and it’s only fitting that we bring our newest ship, Norwegian Bliss, directly to this incredible location.”

“Alaska is one of the top destinations for our guests to explore and we are thrilled to be the first cruise line to offer our guests the opportunity to experience this coveted destination aboard a brand new, state-of-the-art cruise ship custom designed for Alaska, the first of its kind to ever debut in Seattle.”

Norwegian Bliss is the third in the Breakaway-Plus Class at a huge 167,800 gross tons and carrying 4,000 passengers. The ship is to be built at the popular Meyer Werft shipyard in Papenburg, Germany and delivered in Spring 2018. The cruise lines second Breakaway-Plus class ship named Norwegian Joy is currently under construction at the shipyard and will be based in China.

NCL released plenty of details on Norwegian Bliss including the itinerary. The ship will sail a 7-day cruise from Seattle every Saturday with calls in Ketchikan, Juneau, Skagway and Victoria, British Columbia, along with scenic glacier cruising.

Marine life artist, Wyland will be designing the ships hull artwork. Wyland is known for his iconic whale murals, marine life paintings and sculptures. The new design will be revealed later in October, 2016.

Norwegian Cruise Line will also be investing $30 Million in Seattle’s Pier 66. Facilities will be upgraded and improved to handle Norwegian Bliss and future ships. Booking for Norwegian Bliss open in January 2017. 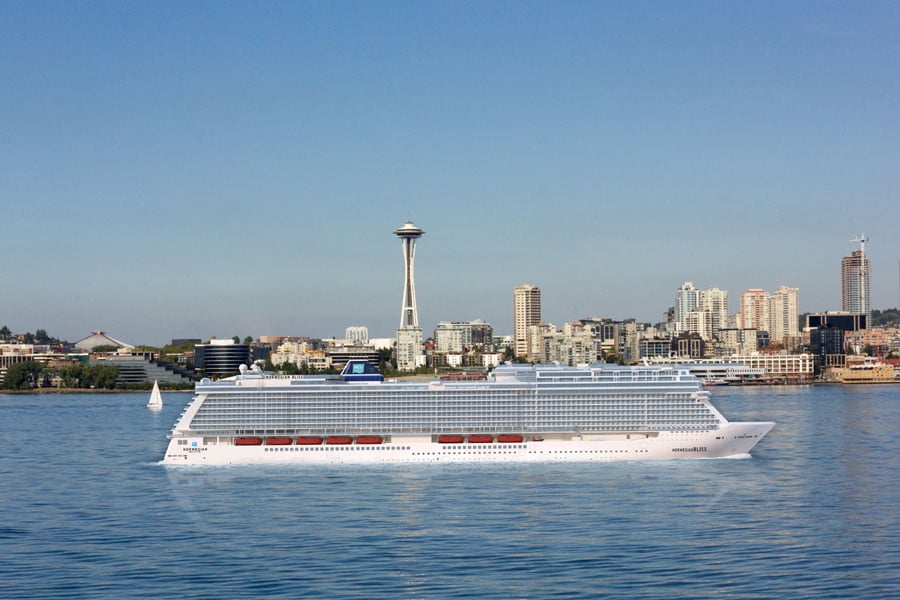