Norwegian Bliss which is the next cruise ship for Norwegian Cruise has reached a major construction milestone.

The next new cruise ship for Norwegian Cruise Line has reached a major construction milestone today. The cruise line and shipyard celebrated a keel laying ceremony at Meyer Werft in Papenburg, Germany of Norwegian Bliss. The keel laying is the first of many blocks which will come together over the coming months to make one large cruise ship.

“We are overjoyed to celebrate the keel laying of Norwegian Bliss, our sixteenth ship and sure to be our most innovative ship to date.” “We have seen overwhelming anticipation and excitement from our guests and travel partners for Norwegian Bliss, from her awe-inspiring custom-designed spaces like her observation lounges to her elegant suites in The Haven by Norwegian, and we are all thrilled to see this magnificent ship begin to come to life with the craftsmanship, precision and cutting edge technology that Meyer Werft consistently delivers.”

Cruise line and shipyard executives attended the traditional ceremony where a “lucky coin” was laid with the block, etched with the outline of the ship’s signature hull designed by wildlife artist Wyland, before the block was lowered into place. The Breakaway-Plus class vessel will begin to come together including floating onto the water for the very first time, fitting out the interior spaces and sea trials before finally beeing delivered to Norwegian Cruise Line in April 2018.

Norwegian Bliss will accommodate 4,000 guests and will be the 12th ship in the Norwegian Cruise Line fleet to be built by Meyer Werft. 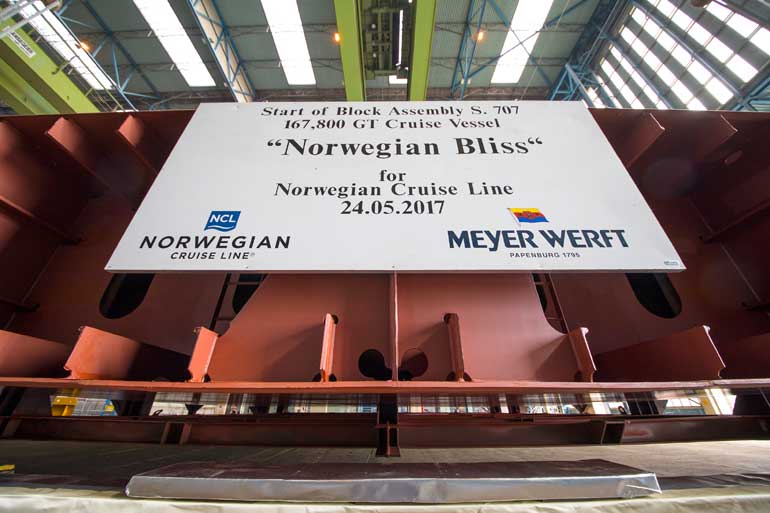