Norwegian Bliss leaves the Meyer Werft construction dock so that the funnel can be added and further fitting out work can be done ready for the cruise ships maiden voyage in April.

Norwegian Bliss which is the next new cruise ship coming for Norwegian Cruise Line has completed a major construction milestone today. The large vessel was floated out of the construction dock for the last time so even more work can be done as we get closer to the ships maiden voyage in April 2018.

The third Breakaway Plus class cruise ship left the construction dock on the morning of February 17 at the Meyer Weft shipyard in Papenburg, Germany. At around 8:00 AM the new NCL vessel inched out of the yard where it has spent most of its time being built block by block. This was also a major milestone within shipbuilding as Norwegian Bliss was floated out onto the water for the very first time. Not just that but also the ship moves forward into a new phase as the completing draws closer before entering service and being delivered this Spring.

Discover more about Norwegian Bliss features including a large racetrack.

Still to Come for Norwegian Bliss

So now that Norwegian Bliss has floated out, what’s next? The ship is now at the fitting out pier still at Meyer Werft. From there work will continue which couldn’t be done while inside the construction dock hall. As the ship is too high the funnel will now be added, a major iconic part of any cruise ship.

In March Norwegian Bliss will make its way up the Ems River, leaving the ever popular Meyer Werft shipyard for the very last time. This is known as the Ems River Conveyance which we’ve covered several times before on new cruise ships being built at the German shipyard.

Further work will be done including technical aspects. A major part of this new phase is fitting out all the interior spaces, Norwegian Bliss will start to look like a floating hotel inside with public spaces, dining venues, bars, staterooms and more coming together. Usually from around two months before the ship is completed crew will start arriving so that the new cruise ship can be ready for the first guests in April 2018 after its delivery to the cruise line.

Norwegian Bliss Photos of Float Out

The Breakaway Plus class ship will be based out of Seattle, Washington starting in June 2018. 7-day Alaska cruises will be offered including visits to Ketchikan, Juneau, Skagway, and Victoria, British Columbia. Before its deployment on the U.S. West Coast, Norwegian Bliss will sail its maiden voyage from Southampton, Uk on April 21, 2018. The ship will offer cruises out of New York and then Miami before finally arriving at its first official season from pier 66 in Seattle. Norwegian Bliss will also spend a season cruising out of PortMiami, Florida for the 2018 winter season. There will be another season sailing from Seattle in 2019 before being the largest Norwegian Cruise Line ship to be based out of New York starting in November 2019. 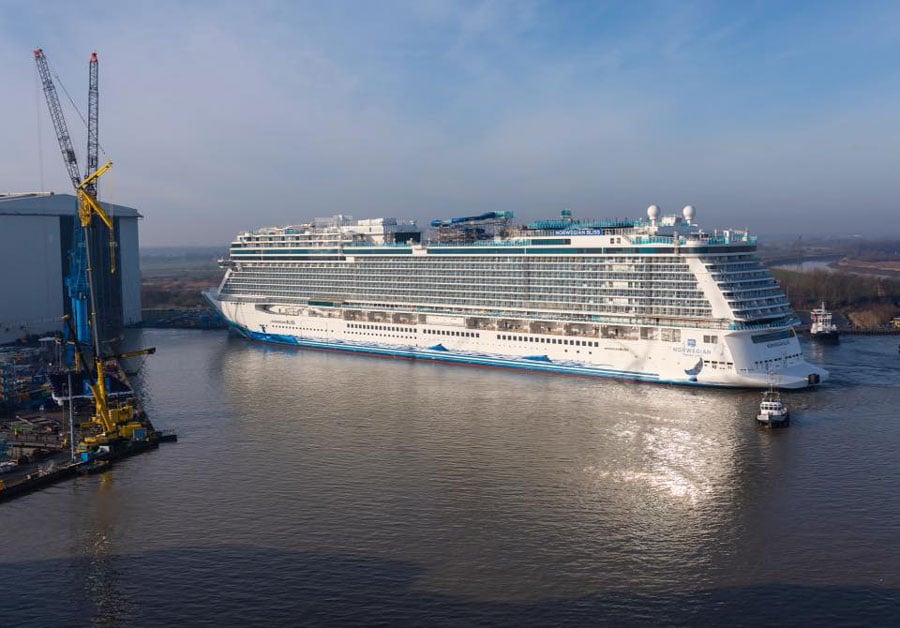