Norwegian Encore which is currently under construction at Meyer Werft is preparing to leave the dock for the very first time.

We’re getting closer to the delivery of Norwegian Encore, the final Breakaway-plus class cruise ship for Norwegian Cruise Line. The shipyard is currently under construction at the Myer Werft shipyard in Papenburg, Germany and details have been released for when the ship will be floated out of the dock.

The ship is scheduled to leave the building-dock II on August 17. The complex and slow process will begin at 8:00 AM but as always it does depend on weather conditions. It’s kind of a puzzle as once the Norwegian cruise is out of the dock it will be transferred to the nearby outfitting pier. Already at the pier is a large engine section of the currently under construction P&O Iona so that will have to be moved first and then will replace Norwegian Encore inside hall II to continue the construction process and be added to other large blocks.

Once at the pier, further work will be done to Norwegian Encore with the majority being done fitting out the interior spaces. The funnel cladding will also be installed during this time. The ship will be just about complete by the time it begins its River Ems conveyance up to the North sea at the end of September.

Once complete the ship will be a total of 169,145 gross tons and have a passenger capacity of 4,004. Measuring 333.46 meters in length the Norwegian Encore will feature the largest race track at sea which is one of the major highlights.

The ship will debut from Southampton, UK on November 2, 2019, and sail a transatlantic voyage ending at the Manhatten Cruise Terminal in New York on November 11. The NCL ship will commence its new year-round service of week-long Eastern Caribbean cruises from Port of Miami, Florida on November 24. 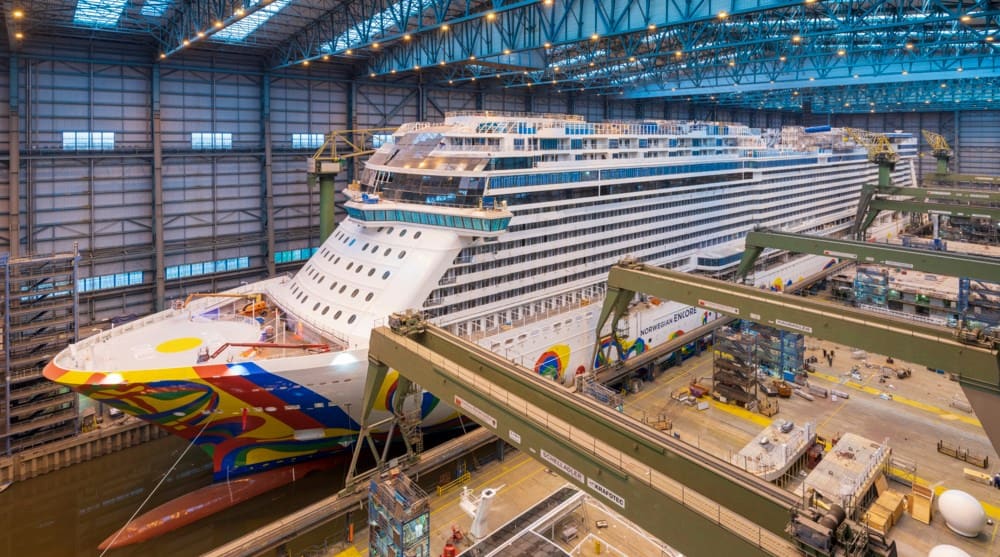