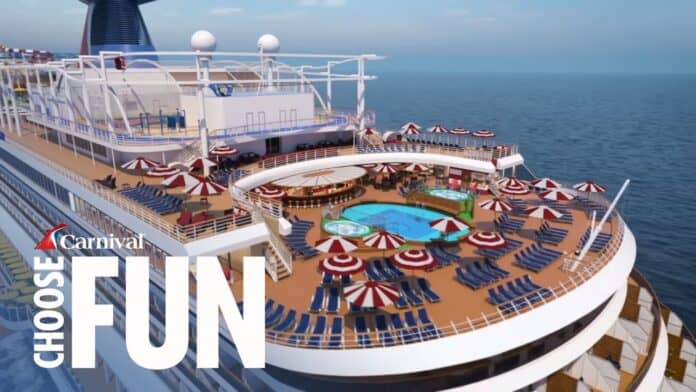 Carnival Cruise Line has released a new virtual tour video of Carnival Horizon which is arriving in Spring 2018.

The build-up for the next new Carnival cruise ship has increased thanks to a to a virtual tour video just released. The cruise line showcases just about everything important and exciting to look forward to onboard the Carnival Horizon. Everything is in a shiny 3D rendering just like the video made for sister ship Carnival Vista in 2016.

The fun host takes us around the vessel inside and out highlighting many features onboard. The ship is introducing a new Guy Fieri Smokehouse Brewhouse and the fleet’s first-ever Teppanyaki dining venue. For the kids, the ship will have the first Dr. Seuss Water Park at sea. Carnival Horizon also features popular favorites already seen on Carnival Vista including an IMAX Theater, SkyRide, and a Havana-inspired bar area and staterooms.

The upcoming Carnival ship is currently under construction at the Fincantieri shipyard in Italy. The ship has already been floated out onto water and now in the final stages with all the interior spaces taking shape. A collection of construction photos have already been released by Carnival.

The ship’s maiden voyage will depart Barcelona, Spain on April 2, 2018, on an inaugural 13-day voyage. the ship will spend the summer season out of New York and will then begin its year-round service from Port Miami. 6-day and 8-day Caribbean cruises will be offered all from Florida starting in September 2018.

Carnival Horizon will be 133,500 gross tons and will carry 3,974 guests at double occupancy.