Royal Caribbean has revealed even more details about Harmony of the Seas water activities. The cruise line has announced that the ship will be the first to feature Splashaway Bay an interactive aqua park for kids.

The new aquatic park for kids will be part of a new series of water activities and features including The Ultimate Abyss and The Perfect Storm trio of water slides. No other ship in the fleet will have these thrilling water experiences when Harmony of the Seas debuts in 2016.

The cruise line says that “Splashaway Bay will be a vibrant waterscape for kids and toddlers with sea creature water cannons, winding slides, a gigantic drench bucket and a multi-platform jungle-gym to keep everyone entertained for hours.” The new feature will be joined by the Abyss which can be enjoyed by all ages. Royal Caribbean has not yet released much details about this slide but it will be among the most thrilling and innovative slides at sea. The Abyss will be 10 stories high at the ships aft and guests can slide down from the Pool and Sports Zone to the boardwalk neighbourhood below. Splashaway Bay will also be joined by the Cyclone, Typhoon and Supercell, they all makeup the Perfect Storm water slide feature that offers guests different thrill options.

Harmony of the Seas will enter service in May 2016 and will be the world’s largest cruise ship and the third in the Oasis class. The 227,000 gross ton ship will spend its inaugural season sailing weekly western Mediterranean itineraries. In November the vessel will homeport in Port Everglades, Ft Lauderdale, Florida sailing seven-night Eastern and Western Caribbean cruises.

The ship will carry  5,497 guests at double occupancy and will span 16 passenger decks. Expect more details of the ship to be released over the coming months. 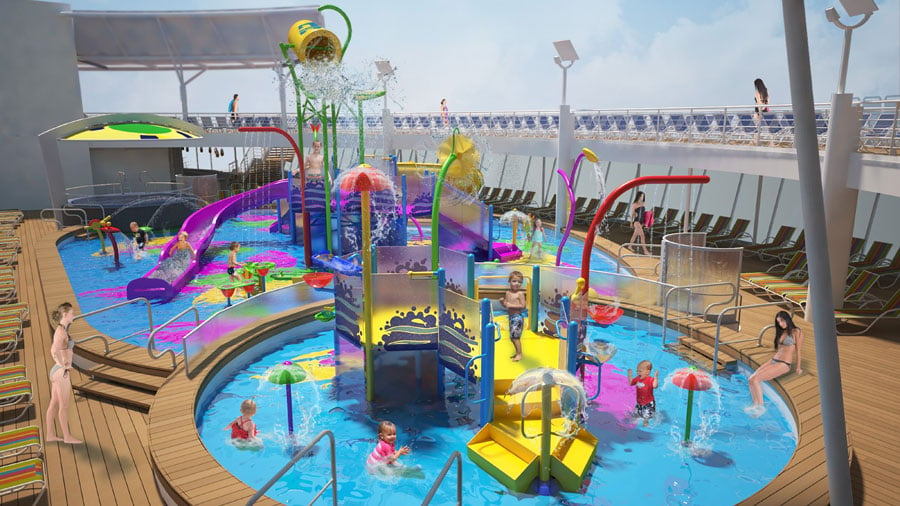