Royal Caribbean has put together a new video which cruise ship enthusiasts will appreciate. The new footage shows the huge Azipods being installed on Spectrum of the Seas, the next new ship to join the fleet in 2019.

Spectrum of the Seas Azipod Video

We’ve already posted recent photos of the huge Azipods which you can take a look at here. If you are into the technical side of cruise ships like us then you’ll enjoy the new video which shoes the Azipod being installed at the Meyer Werft shipyard in Papenburg, Germany.

The Azipods run the ship’s propulsion and these ones built for Spectrum of the Seas were built at ABB in Helsinki then transferred to Meyer Werft where the ship is being constructed. Each Azipod is 200 tons and each takes 1.5 days to install.

It’s nice to see parts of a cruise ship which you never really think about during a cruise vacation. A lot of work goes into the technical areas of the ship hidden away at the bottom underwater. For Spectrum of the Seas, the propellers will be attached to the Azipods in February to complete the complex process.

Related: Take a Look at Spectrum of the Seas Currently Under Construction

The ship is gradually getting closer to completion and those in China will be among the first to experience the first Quantum-Ultra class, an evolution of the current Quantum-class ships. Spectrum of the Seas is being purpose-built for the Chinese market with cruises starting from Shanghai in June 2019.

The new ship for Royal Caribbean will be 168,800 gross tons and have a guest capacity of 4,246. She will also start with a 51-night Global Odyssey cruise from Barcelona, Spain to China starting in the Spring. 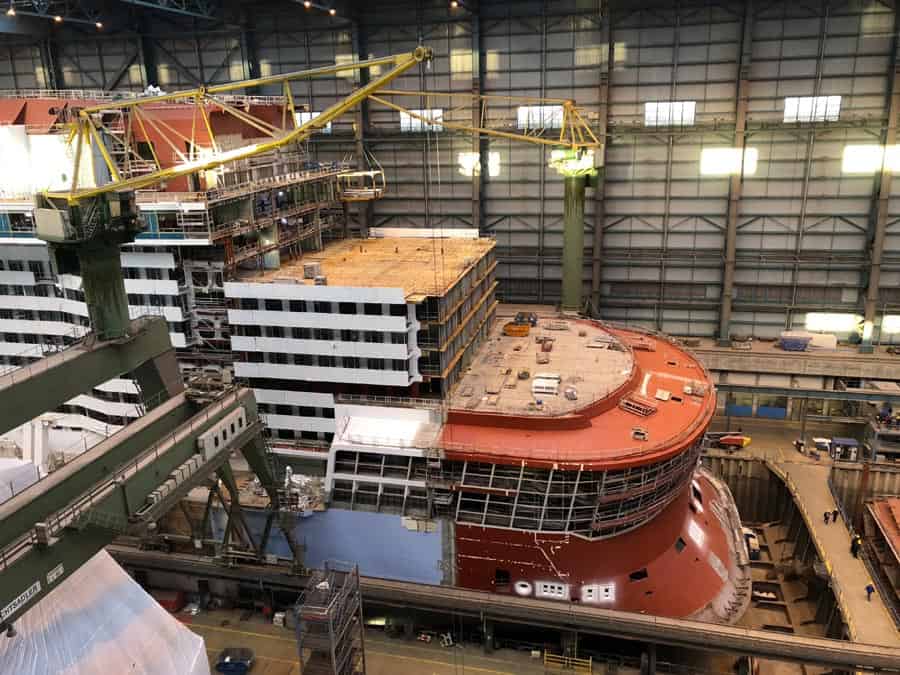