Virgin Voyages has released the first set of interior and exterior renderings of the very first cruise ship which will arrive in 2020. We don’t get to see too much as the cruise line likes to tease what’s to come on one of the most anticipated new future cruise ships.

Virgin Voyages continues to tease all us cruise ship lovers! The cruise line which is based in Florida posted a live video on Facebook yesterday where some stunning spaces were revealed inside and out on the open decks of the future ship. At the event, Virgin also introduced the designers and the inspiration into these stunning public spaces.

Before we get into the actual renderings it would be best to watch the live event which was posted yesterday. Definitely worth a watch if you’re a fan of cruise ships like us and interested booking on the newly formed cruise line.

Stunning new ship interior and exterior designs incoming.We’re going live May 16th at 7pm EST/4pm PST with a sneak peek plus we’ll be talking to some of their acclaimed designers. Don’t miss out. #ShipTease

Let’s start with the VIP Deck which will be featured at the very top front of the yet to be named Virgin vessel. The VIP space is designed by Tom Dixon from Desing Research Studio and this will be the first time he has designed something for a cruise ship. This unique area will compliment ocean voyages well and become a relaxing location for guests or in Virgins words “Sailors”.

Tom Dixon continues his creativity at sea with an elevated Mexican restaurant. He brings type to this future tasty Mexican venue which Virgin cruisers are going to enjoy.

This creative space is designed by Robin Standefer and Stephen Alesch from Roman and Williams. The Dock is an outdoor lifestyle area where guests can chill out with amazing ocean views. This will be the perfect place to socialize and chat with fellow cruisers.

This open deck area is designed by the Concrete Amsterdam firm. This is the place for sailors to keep fit with an elevated jogging track which has the Virgin style and looks, a large catamaran-inspired net to overlook what’s down below and an area for guests to meet up and relax in the fresh ocean air. 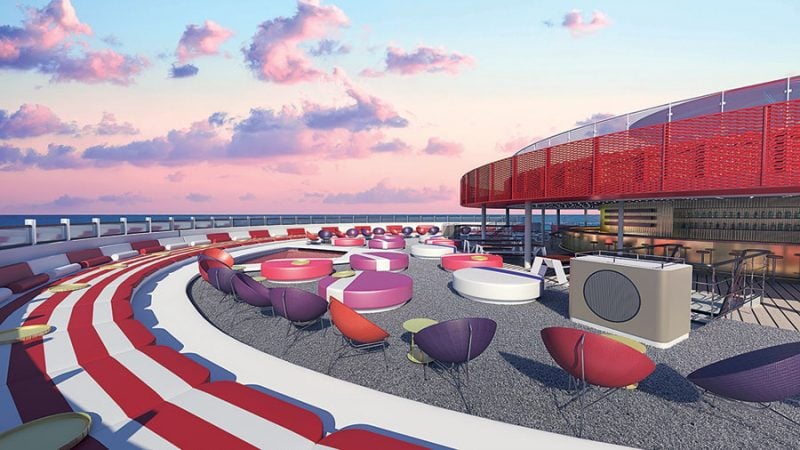 Another stunning space designed by Roman and Williams. The Manor is a nightclub where the atmosphere brings the venue alive. There will be a lot of hidden areas and places to dance, not like your traditional club on some other cruise ships. 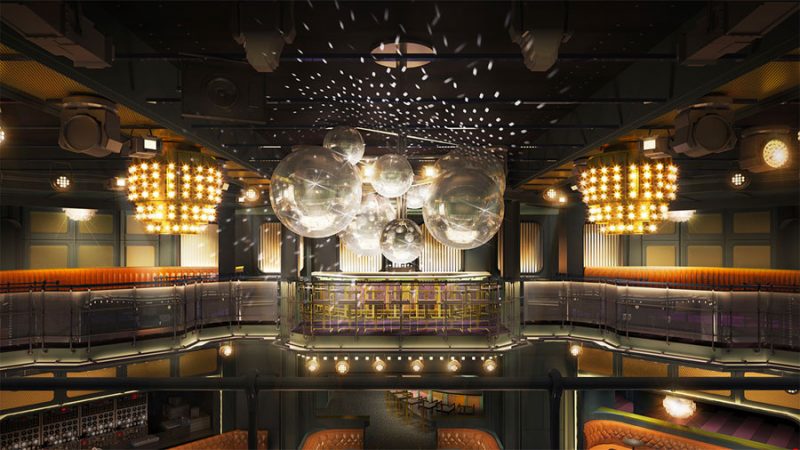 Also Read: Find out More About the Virgin Voyages Mermaid

With only a handful of renderings released expect even more in the coming months and further ship teases are revealed. The first Virgin cruise ship which will arrive in 2020 is being constructed by Fincantieri at the Genoa shipyard in Italy. The cruise line has already released some sneak peek constrcution photos here.

As mentioned in the Live broadcast 48 blocks have already been constructed out of a total of 108 and in July 2018 Virgin Voyages will hold the “Hookup Event” where many blocks built from other shipyards will come together in Genoa.

Once completed the ship will offer 7-day Caribbean cruises from PortMiami and will be for adults only. It will be a total of 110,000 gross tons carrying 2,700 passengers and 1,150 crew members.