Norwegian Encore has been delivered to NCL from the popular Meyer Werft shipyard in Papenburg, Germany. However, the actual delivery ceremony took place where the ship is currently located at the shipyard in Bremerhaven, Germany.

The ship has recently been in the final phase of construction which included sea trials in the North Sea and crew members arriving to prepare for the first guests in November.

“Today we celebrate the delivery of our 17th ship and the close of our history-making Breakaway Plus class – a feat that was made possible through a special collaboration with our partners at Meyer Werft.”

“Our dedication to creating next-level offerings on board, will allow us to continue to deliver meaningful experiences for our guests, when Norwegian Encore arrives home to Miami.”

Norwegian Encore is the 17th ship delivered to the cruise line and is sister to Norwegian Escape, Norwegian Joy and Norwegian Bliss. She will be the final in the popular class as NCL begins heading into a new era of designed vessels.

The nearly 1,100-foot-long Norwegian Encore, with a gross tonnage of almost 170,000 and a guest capacity of nearly 4,000, will embark on her first preview cruise from Bremerhaven, Germany on Oct.31, arriving to Southampton, England on Nov. 2.

During the two-day voyage, guests will enjoy the Company’s newest offerings including the largest and most exciting race track in the industry, the new Onda by Scarpetta, enhanced Galaxy Pavilion and open-air laser tag attractions, and the at-sea debut of the Tony Award-winning Kinky Boots.

On Nov. 2, Norwegian Encore will commence her transatlantic voyage to the U.S., arriving to New York on Nov. 10 with a two-day preview scheduled from Nov. 11 to 13.

She will then voyage to Miami for a series of events, concluding with the christening ceremony and celebration on Nov. 21, which includes a live performance by Norwegian Encore’s godmother and Grammy Award-winning singer and television host Kelly Clarkson.

Norwegian Cruise Line has a total of six new generation cruise ships on order with the first entering service in 2022. The new Leonardo-class vessels will be powered by Liquified Natural Gas (LNG) and 140,000 gross tons which are smaller than ships like the Norwegian Encore. 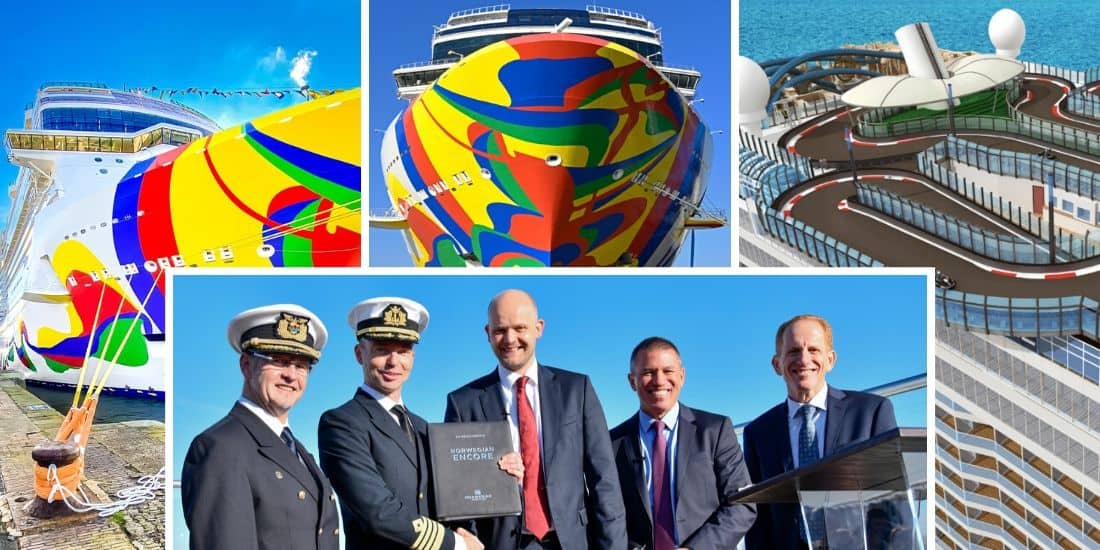