Costa Smeralda which is currently under construction for Carnival-owned Costa Cruises has been delayed even further.

This does now mean the cruise line will need to contact thousands of guests to let them know their cruise will no longer be taking place. The shipyard has apologized for the delay which is due to the complexity and sheer size of the project.

Costa Smeralda was already delayed from her original delivery in mid-October to November 30, 2019. She was to depart on a 15-day voyage from Hamburg to Savona on October 20 but now that never took place with the vessel still at the shipyard in the final phase of construction.

The cruise line has stated the ship will continue to sail the scheduled itinerary from the new delivery date with calls at Savona (Saturday), Marseilles (Sunday), Barcelona (Monday), Palma de Majorca (Tuesday), Civitavecchia (Thursday) and La Spezia (Friday) through May 2020.

Costa Smeralda is the largest Carnival-owned cruise ship to ever be constructed at the shipyard and is proving to be more difficult than anticipated. She is powered by Liquified Natural Gas (LNG) and introduces new features and designs not seen on other ships in the fleet.

Once completed the new ship will be 180,000 gross tons with a passenger capacity of almost 5,300 at double occupancy. Parent company Carnival has ordered several similar LNG ships with the first one already in service for German-based Aida Cruises. Carnival Cruise Line will take delivery of its first LNG ship in August 2020 and British-based P&O Cruises will also welcome P&O Iona in 2020. Princess Cruises will also have one of these new generation mega-ships too.

Let’s hope there is not a third delay and the delivery is pushed back to 2020. Cruise Hive will continue to keep readers updated. 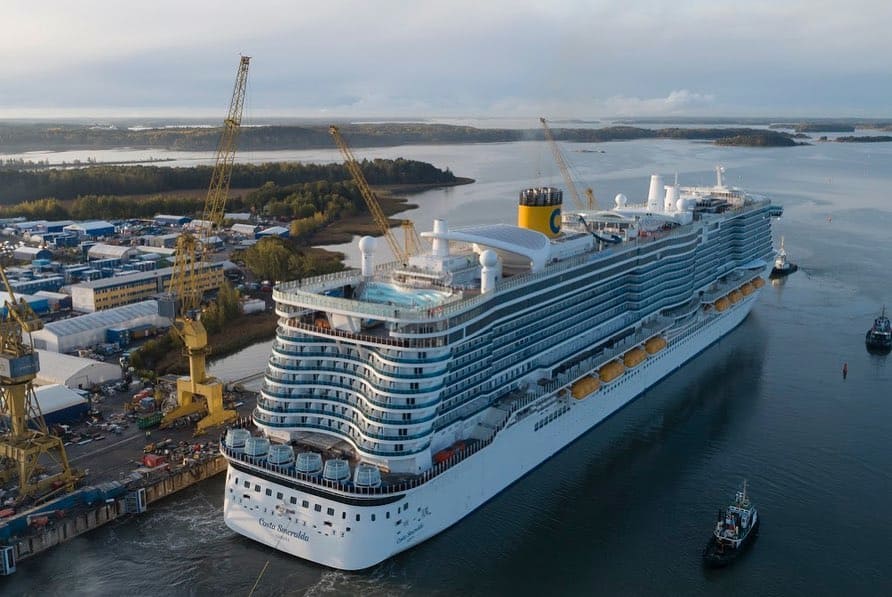