Disney Cruise Line has announced that the Disney Dream will get some new enhancements towards the end of 2015 in major upgrade.

The Disney Dream will undergo a major drydock from October 4th to 24th in Freeport Bahamas. The upgrade is expected to cos millions and will add several new onboard features including a Star Wars: Millennium Falcon play area for kids and spaces for adults.

Lets take a look at whats coming to the cruise ship that Disney Cruise line has revealed:

A newly themed area in Disney’s Oceaneer Club, open to ages three to 12, will delight children with an out-of-this-galaxy experience inspired by the Star Wars saga.

Kids will be transported to a far away galaxy at Star Wars: Millennium Falcon, a Force-filled play area inspired by the spacecraft from the legendary saga. Upon entering the spaceship, younglings will join the Rebel Alliance in the epic battle of good versus evil by assisting with the navigation of this powerful space vehicle. Sitting in the cockpit, children can pilot this super-cool spaceship through hyperspace and trigger lightspeed jumps to different locations around the galaxy.

In Millennium Falcon, children can express their creativity through Star Wars-themed crafts, games and activities. They can also watch episodes from the new Disney XD animated series, “Star Wars Rebels,” on a large screen or virtually join the rebellion at gaming stations featuring the series’ action-packed adventures.

The excitement continues during a shipboard version of the popular Jedi Training Academy experience that invites young Jedi hopefuls –known as “Padawans” –to learn lightsaber moves from a Jedi Master. They can then use the Force and face off in a final test against the evil Darth Vader.

Also in the Oceaneer Club,a high-tech interactive space based on the Disney Infinity video game offers more fun for kids.

In the Disney Infinity Toy Box area, children can experience a whole new way of playing together with exciting virtual experiences and immersive activities. Customized, on-screen adventures will bring to life characters and stories from across The Walt Disney Company.

The complete set of Disney Infinity character figures will be on display for creative inspiration and available for gameplay. Kids visiting this special room–found only on the Disney Dream – will be able to unlock exclusive Disney Cruise Line content that they can continue to enjoy when playing Disney Infinity at home.

Special activities will bring the virtual gameplay experience to life in the real world. For example, a life-sized Disney Infinity Base sets the stage where children take the place of character figures for a group gaming experience unlike any other. Lighting up in response to gameplay on a large screen, this interactive floor will allow kids to be immersed in the Toy Box.

Vanellope’s Sweets & Treats will satisfy the sweet tooth of cruisers of all ages,with handmade gelato and ice cream, an assortment of candy,and delectable novelty treats for purchase. New to Deck 11, the smell of freshly baked waffle cones and candy will linger from the specialty store’s two entrances, inside Cabana’s restaurant and outside by the pool deck.

Bibbidi Bobbidi Boutique, coming to Deck 5 midship, will bring to life the storybook fantasies of young guests with pixie-dusted and piratical makeovers. This very special salon will offer aspiring princesses and knights ages three to 12 the chance to transform into royalty with the help of a fairy godmother-in-training. On pirate party night this boutique becomes The Pirates League where swashbuckling pirates of all ages will have the opportunity to unleash their inner buccaneer.

Cool and Comfortable Retreat for Adults

Exclusively for adults, Deck 13 forward will include a new water feature, Satellite Falls, a circular splash pool with benches and a gently falling rain curtain that provides cool comfort. Around this upper deck, adult guests can soak up the sun in loungers or relax in the shade under a canopy. 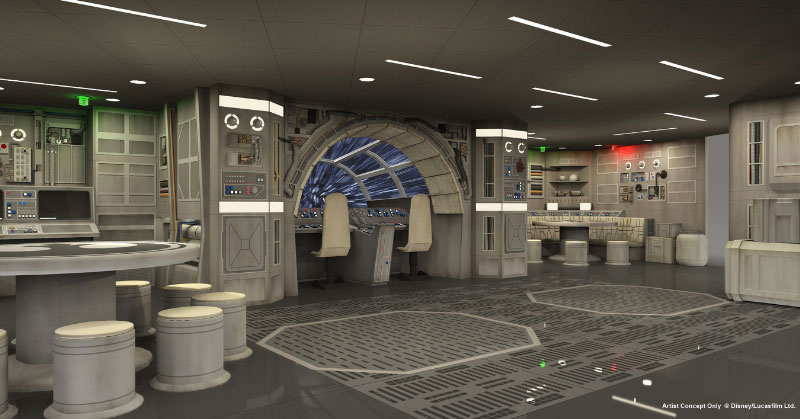