Take a look at new photos from Carnival Horizon at the shipyard during the fitting out phase. Not long to go until the second Vista class Carnival cruise ship arrives.

Not long to go until Carnival’s new cruise ship the Carnival Horizon and as ever Mr. John Heald Carnival Cruise Line Ambassador has been keeping us all updated on one of the most anticipated new cruise ships of 2018. New Carnival Horizon photos have been released from onboard the second Vista-class vessel. Let’s take a look at them further down below.

Before we do, Carnival Horizon is currently under construction by Fincantieri in Italy and now in the final stages. The exterior is complete and most of the work is now being done inside and on the open decks where spaces are being worked on and taking shape. The ship’s crew will also start arriving over the coming weeks so that Carnival Horizon can be ready for its maiden voyage in April 2018.

Take a look at the last batch of photos of Carnival Horizon along with further details about the new ship.

Carnival Horizon Photos from Onboard

We’ll go through some areas of the ship to highlight, even though Carnival Horizon is the sister ship and identical to Carnival Vista there will be new introductions not seen on any other Carnival cruise ship.

So having said we go straight to the dedicated new Guy’s Pig & Anchor Bar-B-Que Smokehouse|Brewhouse, a first in the fleet offering a full BBQ food dining experience and beer brewed onboard. Already experienced throughout the fleet is another Guy Fieri venue called Guys Burger Joint which will also be featured on Carnival Horizon.

Carnival Horizon is going all out and upping the game compared to its sister ship with an all-new Teppanyaki Restaurant. The new Asian sushi-inspired venue is the first in the fleet and there will be a fee. Do read the menu of Bonsai Teppanyaki here. Also, Bonsai Sushi will be featured on Carnival Horizon, they both compliment each other.

One of the first features revealed by Carnival in 2017 is the Dr. Seuss Water Park, a place for all things thrills! The water park features Fun Things slide, The Cat in the Hat slide and water games for the young.

We’ll be having more photos of these exclusive spaces on Carnival Horizon in the future. As you can see the spaces are coming along nicely during the ships fitting out phase and the majority of the work has already been finished.

Other Spaces on Carnival Horizon

Other areas on the new Carnival ship are taking shape including the dining rooms, casino, public walkways and the modern Atrium with the LED centerpiece. We’ll let the photos do the talking as the build-up to Carnival’s newest cruise ship is well underway with the maiden voyage coming soon.

Carnival Horizon Fitting Out Spaces
1 of 8

Some other important features which will offer guests a cruise like no other includes an IMAX Theater, SkyRide and Havana Club, all first introduced on Carnival Vista when it entered service in 2016.

The Carnival cruise ship will be completed before April 2, 2018, which is when the first cruise will depart Barcelona, Spain on a 13-night Mediterranean voyage. Before that, the official handing over from the Fincantieri shipyard to the cruise line will take place and then further into service the naming ceremony. From September 22 CArnival Horizon wil be based from Miami, Florida sailing Caribbean cruises. The ship is 133,500 gross tons and has a guest capacity of 3.936. 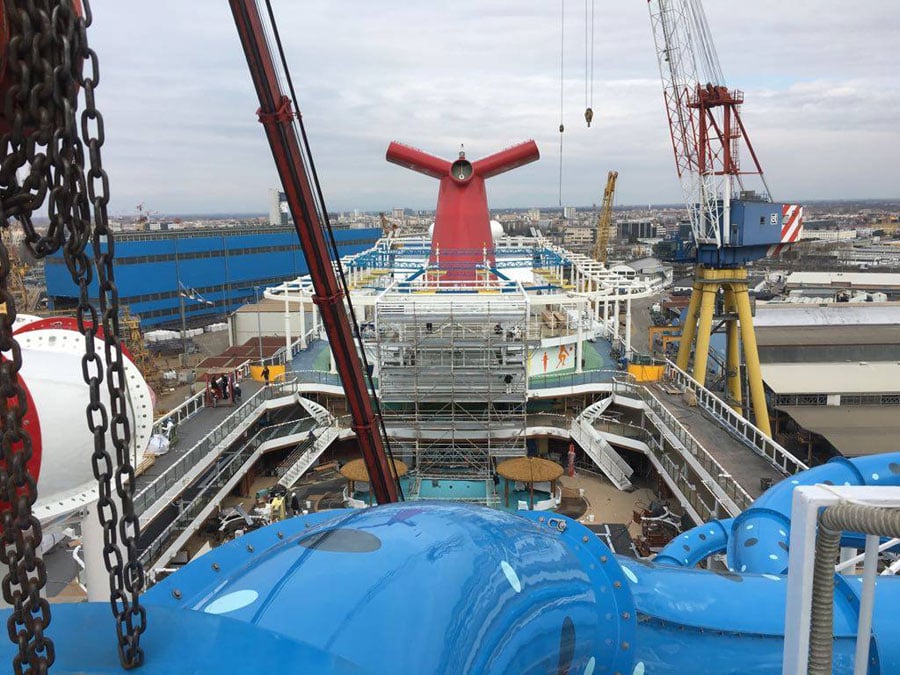