On January 16th Norwegian Cruise Line revealed a ton of dining, beverage and entertainment features that will be onboard the up coming Norwegian Escape.

The cruise line hosted an exclusive event in New York where so many features were announced we almost lost track! Whats special about these reveals is that they are for the largest ever cruise ship built for NCL which is also known as the Breakaway Plus class.

Norwegian Escape will be full of branded and celebrity dinning venues. two brand new specialty dining venues will be by James Beard Award-winning Iron Chef Jose Garces in the Bayamo. The Chef will bring a hint of Cuban and Latin to the fleets largest vessel, inspired dishes will be offered in a chic dining room and al fresco on The Waterfront. Pincho Tapas Bar by Jose Garces will also offer traditional Spanish tapas à la carte in a lively, casual setting. Bayamo will also feature a Sugarcane Mojito Bar near the entrance where guests can enjoy a cocktail before dinner.

“With Norwegian Escape, we are transforming culinary experiences at sea and continuing our legacy of innovation that has revolutionized dining in the cruise industry,” said Drew Madsen, Norwegian Cruise Line’s president and chief operating officer. “We are building on our solid foundation of branded partnerships, including Jimmy Buffett’s Margaritaville, and welcoming new ideas and flavors from award-winning chefs. Norwegian also continues to pave the way as a leader in entertainment, as we bring two Tony Award-winning Broadway musicals and a post-modern cabaret direct from Los Angeles to Norwegian Escape.”

A new Food Republic space has been introduced for Norwegian Escape where passengers get try out dishes from Asia to Central Europe and the Mediterranean. This new concept could rival the Quantum of the Seas due to convenient iPad ordering. With a simple swipe of their key card, food is prepared to order and brought directly to the guest’s table. The Food Republic will be open from lunch through to dinner.

The ship will feature the fleets very first District Brew House where guests can enjoy drought beer at sea. The new venue will feature 24 draft beers on tap and more than 50 different bottled beers also be complimented by pub styled snacks. Available at the District Brew House are handcrafted cocktails from Bar Lab’s James Beard Award-nominated mixologists Gabriel Orta and Elad Zvi. We can see this place being a hub of activity and a great place for passengers to chill.

Take a look at everything announced by NCL in this video that the cruise line released:

Norwegian Cruise Line also revealed its entertainment offerings during the event in New York and the ship will be right up there with two Tony Award-winning Broadway musicals headlining in the Escape Theater. The award-winning broadway show “After Midnight” will entertain guests with dancers, jazz music, and big-band tunes. Also in the Escape Theater is “Million Dollar Quartet” is the smash-hit musical inspired by the famed recording session that brought together rock ‘n’ roll icons Elvis Presley, Johnny Cash, Jerry Lee Lewis and Carl Perkins for the first and only time. Many popular songs from that time will be included and we’re pretty sure guests will want begin to sing along!

An 80’s experiecne will be at Norwegian Escape’s “Supper Club” where gusts can enjoy popular 80’s music and dinner. Featured here is the “For The Record” that is a critically acclaimed Hollywood night that celebrates classic soundtracks of motion picture masters in a one-of-a kind 360° post-modern cabaret. We also can’t forget the ships Comedy Club where passengers can laugh the night away with the nation’s top comedians through the line’s expanded partnership with Levity Entertainment Group.

Currently being built at Meyer Werft in Germany, Norwegian Escape will sail weekly seven-day cruises from her year-round homeport of Miami to the Eastern Caribbean beginning on November 14, 2015. The 164,600 gross ton ship will be the largest ever to home port year-round in Miami, carrying 4,200 guests to tropical Caribbean destinations including St. Thomas, U.S. Virgin Islands; Tortola, British Virgin Islands and Nassau, Bahamas. Norwegian Escape’s signature hull artwork is designed by marine wildlife artist and champion of ocean conservation, Guy Harvey. 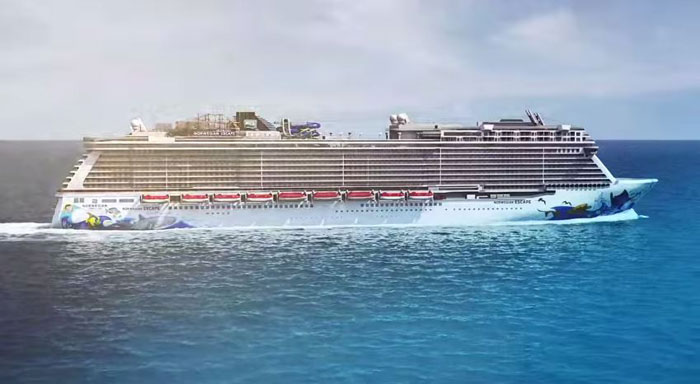