Check these must-know things about the Norwegian Epic cruise ship operated by Norwegian Cruise Line, she's in a class of her own!

So, you could say that taking a Norwegian Epic cruise is a can’t-miss opportunity. Is it one that you have on your cruising radar?

If so, here are 11 must-know things that you should learn about the Norwegian Epic cruise ship, before your next cruise.

1. Norwegian Epic was intended to have two sister ships — but is now the only one in its class.

So let’s start out with the most intriguing thing about this ship. While other cruising vessels usually have at least one other ship in its class — a ship that shares its vibe, facilities, amenities, etc. — Norwegian Epic is all on its own.

But this wasn’t intended to happen. Norwegian Epic was planned as the flagship of Norwegian Cruise Line’s Epic class. Two ships for the class were ordered in November 2006 (including Norwegian Epic), with the option for a third vessel from the same shipyard, STX Europe Chantiers de l’Atlantique. However, a dispute interrupted the construction.

Worth Reading: 9 Reasons to Cruise on the Norwegian Breakaway Cruise Ship

The result of the dispute was that the shipyard would go ahead with constructing the first ship, but that the second and third ships simply would not be built.

And, so, we’ve ended up with Norwegian Epic in the Epic class all by itself, launching in 2010.

2. When built, Norwegian Epic was the third-largest cruise ship in the world.

For a decade-old ship, Norwegian Epic isn’t shabby, but it was even more glamorous than it is now when it launched in 2010. At the time of the ship’s construction, it was the third-largest cruise ship in the world.

Just how big is it?

Unfortunately for Norwegian Cruise Line, Norwegian Epic has been far surpassed by plenty of other cruise ships by now. Currently, Norwegian Epic is the 21st-largest ship in the world. The current third-largest is Oasis of the Seas from Royal Caribbean, which boasts a maximum occupancy of 6,780 passengers and a gross tonnage of 226,838 GT.

3. The ship is no stranger to the limelight.

As such a unique ship, Norwegian Epic has certainly enjoyed its share of the limelight.

Right after the ship debuted in the summer of 2010, it hosted Macy’s 34th Annual 4 July Fireworks on NBC. The one-hour telecast event was broadcasted on the ship while the fireworks were launched off a nearby vessel.

The next year, the ship was featured on the show Mighty Ships, a Discovery Channel series that follows the routes, passengers and crews of cruise ships around the world.

4. The ship has received expansive revitalizations over the last decade.

Sure, when Norwegian Epic debuted, it offered a lot of glitz and glam to its passengers. For example, at the time, it offered the only tube and bowl water slide at sea. Other interesting amenities included a rappelling wall, bowling alley and an ice bar.

But over time, every cruise ship begins to show its wear and tear. As such, in 2015, Norwegian Cruise Line announced plans for a two-year, $400 million, fleet-wide refurbishment program, and Norwegian Epic was a part of this program, which was dubbed The Norwegian Edge.

Norwegian Epic was the first ship to receive renovations under the program, in October 2015. Changes included the addition of new dining and drinking venues, like The Cavern Club, as well as redesigns of popular restaurants and bars aboard the ship, including La Cucina, Le Bistro, The Manhattan Room and more.

5. A Norwegian Epic cruise is the perfect place to party.

The cruise ship has been compared to a getaway to Las Vegas, and for good reason. There’s plenty of entertainment and a party atmosphere everywhere you look.

The casino is actually vibrant and lively. The live music and theatrical shows feature top-tier talent. The dining options are varied, plentiful and sure to please.

In other words, if you’re worried you might be bored on a cruise, go with this ship. You won’t be bored for long.

6. There’s no way to go hungry while you’re aboard a Norwegian Epic cruise.

One great thing about really any Norwegian cruise ship? The cruise line can be relied upon to outfit each of its ships with plenteous dining options. While some ships simply can’t deliver when it comes to good eats and plenty of them, that’s not the case here.

A Norwegian Epic cruise gives travelers more than a dozen different dining options, both complimentary and for a fee, with a range of European, American and Asian cuisines to choose from. The cruise line is also pretty great about adjusting for dietary needs, if that’s a concern.

Complimentary dining includes dining in the two manning dining rooms, Manhattan Room and Taste. While the latter is open for three meals a day, the former is only open for dinner and has a more posh vibe. The good news? Neither works on fixed seatings, so you can dine whenever you please while the two are open.

You also have access to the buffet on a complimentary basis, as well as the pub, O’Sheehan’s, which offers more American-style food than pub fair.

For-a-fee restaurants include Shanghai and Shanghai’s Noodle Bar, both of which serve Chinese and pan-Asian cuisine on Deck 6; Great Outdoors, off the buffet and near the pool; Spice H20, an adults-only space with a lunch buffet and snacks; Le Bistro, a French formal eatery; Cagney’s, a signature steakhouse that you can find on just about any Norwegian vessel; Moderno Churrascaria, a Brazilian steakhouse-style restaurant; Teppanyaki, another Asian eatery; Yakitori & Sushi, yet another Asian restaurant, but specializing in sushi and sashimi; and, lastly, La Cucina, an intimate Italian restaurant.

Remember when we said that this ship really has a Las Vegas vibe to it? Well, here’s how.

There’s literally entertainment everywhere, no matter the hour of the day.

Whatever your favorite form of entertainment, you can probably find it happening at some point during the day aboard Norwegian Epic.

8. You can always find a drink aboard Norwegian Epic.

There are plenty of different watering holes aboard Norwegian Epic. However you prefer to enjoy a frosty beverage, whatever kind of adult beverage you like best, you can find the best experience for you.

Try O’Sheehan’s for 24/7 beer, or go to the Humidor Cigar Lounge for a smoke and drink. The Matings Whiskey Bar is the place to go for whiskeys from all over the world.

Wasabi Sake Bar serves up just what you think — sake. Shaker’s Martini Bar is all for the martinis and Champagne. Svedka and Innsikillin Ice Bar is your place to go for a parka (yes, they really do provide parkas for guests to wear while inside the bar!) and vodka.

While there aren’t as many bars and lounges aboard Norwegian Epic as what you might see on some other ships, each bar and lounge offers a wildly different experience, so that you’re always finding something new, each night you visit a different venue.

9. Outdoor entertainment gives you plenty of ways to soak up some sun and splash away.

The ship offers two separate main pools (with four hot tubs), a kiddy pool area and a pool for suite guests. The Spice H20 lounge is outside as well, and is adults-only, with its own pool and two hot tubs.

A water park area offers three water slides, with the crowd favorite being the Epic Plunge, which drops cruisers through a funnel and then a long tube that leads to a pool.

If you’d prefer not to get your hair wet, you can enjoy the rock climbing and repelling walls, or the miniature golf course. A sports complex also offers a basketball court, climbing cage and trampoline.

10. Relaxing is as easy as a visit to the Norwegian Epic spa.

If all the above won’t relax you during your getaway, you can always pay a visit to the Norwegian Epic spa, which offers a huge variety of treatments (more than 40!) and an expansive space to relax in (more than 31,000 square feet of rejuvenation).

Choose from classic treatments, like massages and facials, or go with a medi-spa treatment to address some fine lines or wrinkles. Expect standard pricing.

You might think that because this ship has such a party vibe for the adults, that there’s little left for the kids, but that’s hardly the case. Children traveling with their families enjoy access to not only kids clubs for varying age groups, but also a range of on-board activities.

Kids ages 6 months to 12 years go to the Splash Academy, where they’re further split into four groups by age and given activities suitable for their interests and education level. Teens have their own separate lounge, too, with lots of teen-approved activities, from video games to dodge ball.

Unfortunately, unlike what you might find on some other ships, there isn’t any in-cabin babysitting offered, but there is a group babysitting service that’s offered until 1:30 a.m.

So, ready to take your Norwegian Epic cruise?

These 11 things to know about the Norwegian Epic cruise ship just scratch the surface. There’s still a ton to explore and discover among this one-of-a-kind, totally-unique ship, and you never know when you’ll get another chance to cruise a vessel that’s truly the only in its class.

When was the Norwegian Epic refurbished?

In 2015, Norwegian Cruise Line announced plans for a two-year, $400 million, fleet-wide refurbishment program, and Norwegian Epic was a part of this program, which was dubbed The Norwegian Edge.

Norwegian Epic was the first ship to receive renovations under the program, in October 2015. Changes included the addition of new dining and drinking venues, like The Cavern Club, as well as redesigns of popular restaurants and bars aboard the ship, including La Cucina, Le Bistro, The Manhattan Room and more.

How many pools are on Norwegian Epic?

The ship offers two separate main pools (with four hot tubs), a kiddy pool area and a pool for suite guests. The Spice H20 lounge is outside as well, and is adults-only, with its own pool and two hot tubs.

A water park area offers three water slides, with the crowd favorite being the Epic Plunge, which drops cruisers through a funnel and then a long tube that leads to a pool.

How large is the Norwegian Epic cruise ship? 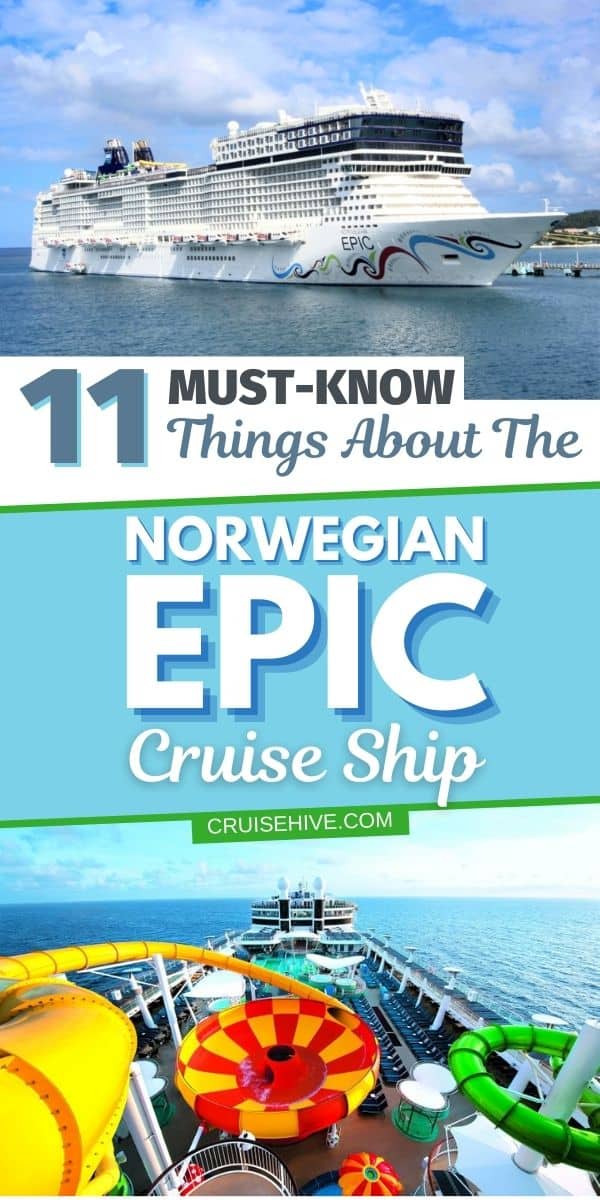