These are the must-know things about Royal Caribbean's Jewel of the Seas cruise ship, a Radiance-class vessel.

Royal Caribbean’s Jewel of the Seas debuted among Royal Caribbean’s fleet in the early 2000s, making it a little on the older side, but that hardly makes the ship undesirable. For cruisers who want that classic, traditional cruise experience, that’s exactly what they can find aboard this ship.

Launched in 2004, the Radiance-class vessel debuted with all of the perks and features that you’d expect from a cruise ship from the time, and Royal Caribbean has done a good job of keeping up with repairs and various refurbishments, including a large (to the tune of £20 million) dry docking in 2016 that brought the ship up to par with many of the cruise line’s other vessels, improving both entertainment options and staterooms.

Sailing around the Mediterranean, Caribbean and Middle East over its long life, the ship has seen much of the world. Is it ready to see you?

If you’re thinking of taking a Jewel of the Seas cruise in the near future, you’ll want to know as much about the ship as possible, whether you’re new to the world of cruising, or you’re an old pro.

Here are the top 10 of our must-know things when it comes to Royal Caribbean’s Jewel of the Seas.

If you don’t prefer the party-esque atmosphere that you’ll find on some other cruise ships, you’ll be glad to know that’s not what you’re going to get aboard Jewel of the Seas.

This ship is on the smaller side and caters to low crowds of cruisers who want a traditional cruising experience, without a bunch of hubbub.

The ship comes in at a gross tonnage of 90,090 GT and a length of 962 feet. It has 12 passengers decks (Decks 2 through 13) and a capacity for 2,501 passengers, plus 842 crew members. While that may seem like a lot, keep in mind that it’s basically as little as half of what some other cruise ships carry.

Jewel of the Seas was the fourth and final Royal Caribbean Radiance-class ship. The Radiance class was built between 2001 and 2004, and came between Royal Caribbean’s Voyager and Freedom classes.

Special Radiance-class features at launch included more than three acres of glass on each ship; more than 700 balcony staterooms on each ship; retractable pool roofs; and the first self-leveling pool tables at sea.

Royal Caribbean’s Jewel of the Seas only offers a few complimentary dining options aboard the ship, but you can expect the service and food to be up to snuff.

The main dining room is Tides, which is a two-story main dining room set over Decks 4 and 5. The opulent environment is exactly what you’d expect from a classic cruising experience. Themed menus change daily, but you can find that there’s usually something to fit every diner in your party.

Of course, every cruise ship needs a buffet, and Jewel of the Seas’ is located on Deck 11. Expect a very wide range of options.

There’s additionally a complimentary pizzeria and cafe on Deck 11, which is one complimentary venue that you won’t find on a lot of other Royal Caribbean ships.

If you’ve sailed with Royal Caribbean in the past, then you likely are familiar with the cruise line’s standard, for-a-fee restaurants, the ones that you can find on all of the cruise line’s ships, and that basically offer the same experience, no matter where you are in the world.

So, you might expect that these same restaurants are on Jewel of the Seas, and you’d be right.

There’s also a coffee bar that serves desserts and specialty drinks for a fee.

If you don’t want to try all the for-a-fee restaurants, and only want to give one a go, try Giovanni’s Table. The Italian restaurant is highly reviewed by cruisers, and is fairly new on the ship, added during the ship’s 2016 dry dock.

Don’t expect necessarily to find ice skating shows or high-flying trapeze acts or Cirque du Soleil while you’re aboard Royal Caribbean’s Jewel of the Seas. The cruise ship is much more adept at serving up standard cruising entertainment than it is anything brand-new and glitzy.

What exactly is “standard” cruising entertainment? Think shows in the theater — Broadway-style, cabaret and live music. Think cover bands and maybe a magician or two. Occasionally, you might find a lecture going on in the theater, during the daytime.

For the most part, don’t expect celebrity-style talent, either. However, if it’s classic cruising entertainment you want, that’s what you’ll get (and for many people, that’s a good thing!).

Beyond the theater, it is possible to find live music elsewhere, with dancing encouraged.

Of course, daytime entertainment throughout the ship is more of that standard — peppy cruise coordinators leading games like Bingo and trivia, and dance classes or wine tastings.

There is a movie theater on the ship, though, which is something that you don’t always see on every Royal Caribbean ship.

There additionally is, of course, a casino.

While the dining options aren’t necessarily plentiful compared to what you might find on larger, newer ships, when it comes to bars and lounges, Jewel of the Seas really delivers, with a wide range of watering holes. Not only is there a large number of bars and lounges, but each one offers a different theme or aesthetic.

There’s the classic lobby bar, of course, right in the center of all the action. There’s a sports bar on Deck 6 called The Pit Stop. Vintages is an upscale bar serving wine and small bites.

Schooner Bar is a Royal Caribbean classic that you’ll find on every ship in the fleet, with a nautical vibe. The Congo Bar is all about live music and great views. There’s a bar near the pool, as well as a separate bar overlooking the pool. Then, there’s a club-style bar called Vortex on Deck 13.

And that just scratches the surface!

7. Places to Catch Some Rays

If you’re a sun seeker wanting to soak up as much Vitamin D as possible during your cruise, then you’ll be glad to know that there are several pool areas aboard the ship.

The main pool is probably one of the more crowded areas on the ship, even though the ship itself hardly feels crowded most of the time. There’s lots of seating, both in and out of the shade. Two hot tubs are available in addition to the pool.

The solarium is also a nice spot to enjoy the heat. The solarium features a pool and a hot tub. Unlike many Royal Caribbean ships, the solarium aboard Jewel of the Seas is not adults-only.

A separate children’s water slide is the only non-pool water activity, though, unfortunately.

The ship does, though, have a climbing wall, a miniature golf course and a basketball court, for other ways to be outdoors, without necessarily needing to get your hair wet.

Worth Reading: 9 Things to Love About Royal Caribbean’s Liberty of the Seas

If you’re feeling weighed down by all the cruise ship buffet food, you can burn off a few calories or just make sure to get your steps in for the day, at the spacious fitness center aboard the ship. There’s a lot of different exercise equipment to choose from, as well as some fitness classes.

You can even find a few classes for free, and those that aren’t free really aren’t that expensive anyway. As with other Royal Caribbean ships, Jewel of the Seas also has an outdoor walking and jogging track.

When it’s time to take care of the spirit, though, you’ll want to head to the spa, where it’s easy to relax and leave feeling rejuvenated. You can expect the standard spa treatments that you would get just about anywhere, from massages to facials. There are some additional medi-spa treatments, though, if you’re interested in zapping away some fine lines or wrinkles.

Royal Caribbean is renowned for its children’s programming aboard its entire fleet, so you can expect plenty of kid-tailored amenities aboard Jewel of the Seas.

Adventure Ocean and Adventure Beach are the areas set aside for children under 12, on Deck 12. There’s indoor space for fun and educational activities, plus an arcade, as well as outdoor space with a splash pool. Children are split up into age groups and then activities are created according to their age group’s needs.

The teen area is limited and not as cool as what you might find on some other Royal Caribbean ships, but it is better than nothing. Called Fuel, the Deck 12 area has a dance floor and age-appropriate bar. Teen-only programming is plentiful and ranges from parties to pool movies.

Last, but certainly not least, when you’re ready to book your Jewel of the Seas cruise, you’ll have plenty of options to choose from. There are more than a thousand staterooms on the ship, many of which received facelifts during the 2016 dry dock.

Also Read: 10 Things to Know About Royal Caribbean’s Voyager of the Seas

Jewel of the Seas FAQ:

Does Jewel of the Seas have a diamond lounge?

Jewel of the Seas features a Diamond Club on Deck 13, where Diamond, Diamond Plus and Pinnacle Club passengers can enjoy complimentary amenities and concierge service, 24 hours a day. Expect special breakfast, snacks and dessert throughout the day and a self-service bar. The Diamond Club is on the small side, though, seating less than 35 passengers at one time.

How many swimming pools are on Jewel of the Seas?

What class cruise ship is Jewel of the Seas?

How big is Jewel of the Seas?

The ship comes in at a gross tonnage of 90,090 GT and a length of 962 feet. It has 12 passengers decks (Decks 2 through 13) and a capacity for 2,501 passengers, plus 842 crew members. While that may seem like a lot, keep in mind that it’s basically as little as half of what some other cruise ships carry. 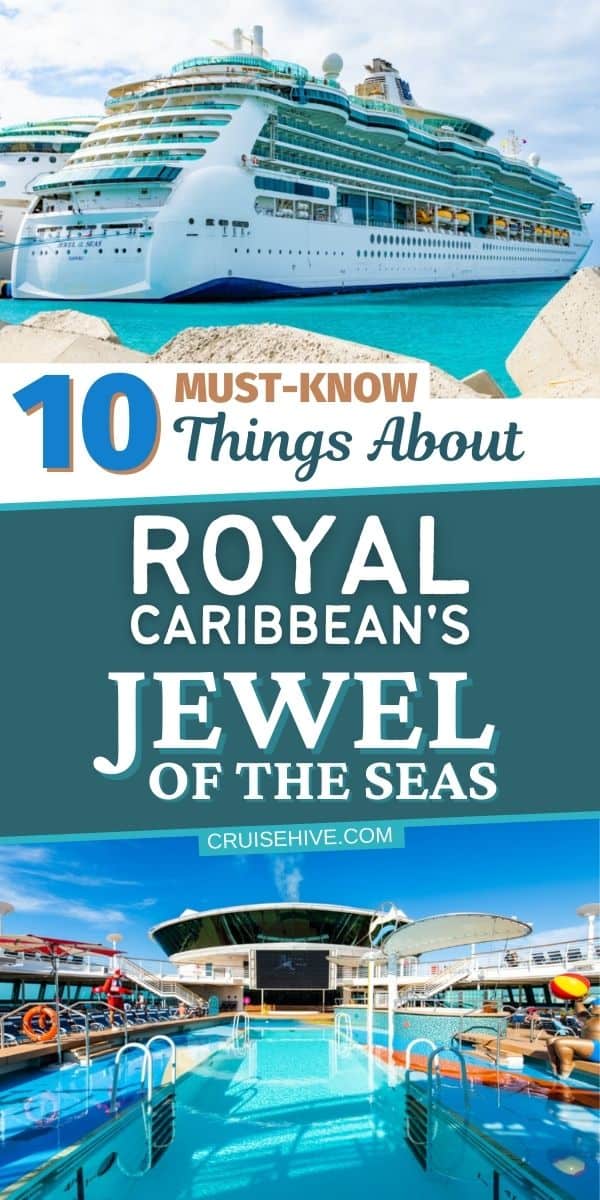