MSC Seaside To Sail From Miami All Year Round

MSC Cruises have announced that its most innovative and futuristic looking designed cruise ship the MSC Seaside will be sailing from Miami, Florida all year round.

The cruise ship which was previously known as Seaside Class has now been given the name of MSC Seaside and will be the first ship built-in a new class for the privately owned cruise line. Once the ship makes its debut in November 2017 it will sail all year round from PortMiami, Florida. The vessel will sail Caribbean cruises and will go head to head with the largest cruise ships in the world.

“The Seaside class of ships is part of MSC Cruises’ $5.3 billion fleet expansion plan that will allow the company to double its capacity by 2022,” said Gianni Onorato, CEO of MSC Cruises. “Today is a very exciting day for the company as this is the first major announcement related to the company’s new builds and demonstrates our enthusiasm and long-term commitment to continuing to expand our presence in North America.”

MSC Cruises has also revealed further details about the 154,000 gross ton ships Aqua Park. There will be an industry first “Slideboarding” feature where Guests race down a two-story, 367 foot slide on a sleekly designed raft that includes an embedded game controller with colored buttons. Thrill seekers can be part of a game where they have to match the color of the flashing strobe lights seen on various sections of the slide with the colored buttons on the raft.

There will be plenty more twists and turns with the MSC Seaside’s Duelling High-Speed Aquatubes. If guests dare to they can race against others through a combined 525 feet of twists, turns and drops, on slides that partially extend over the side of the ship and give riders a look a quick look at the sea below.

Not forgetting the younger passengers, the Water Park will feature AquaPlay and AquaSpray. There will be buckets and various water features with water which kids can have fun with. Jets and special sprays will be found all over the Water Park that anyone can enjoy.

An Adventure Trail will also be including in the Aqua Park which is a ropes course where passengers can get adventurous. there will be ripe bridges, climbing towers, slides and crawl-throughs. guests will be up high so expect nice views of the Aqua park below.

“MSC Cruises has the unique opportunity to provide North American guests with a ‘Mediterranean Style Cruise’ experience that no other line is able to offer, and guests from around the world a unique setting as it sails to the most sought-after destinations in the Caribbean” added Onorato. “Since bringing MSC Divina to Miami in November 2013, we’ve seen significant demand from consumers in the product, excellent support from our travel agent partners and the growing need for additional MSC Cruises’ ships in the market.”

In addition to the MSC Seaside the cruise line has also revealed plans on expanding its Miami operations which is the cruise capital of the world. There will be an upgraded berth and cruise terminal at PortMiami which will be ready for the MSC Seasides arrival in 2017. MSC Cruises is one of the fastest growing cruise companies in the industry at the moment and this is just one of many new large cruise that have been ordered.

Following the first ship’s delivery from the shipyard, MSC Seaside will make her way to Miami for MSC Cruises’ first ever christening ceremony in the U.S. to take place in late 2017. MSC Seaside is being built by Fincantieri, Italy and is the largest ever built by the Italian ship building company. The ship can accommodate up to 4,140 guests at double occupancy at 154,00 gross tons. This is all part of MSC Cruises $5.3 billion expansion plan. Another Seaside class vessel will be built by 2018. 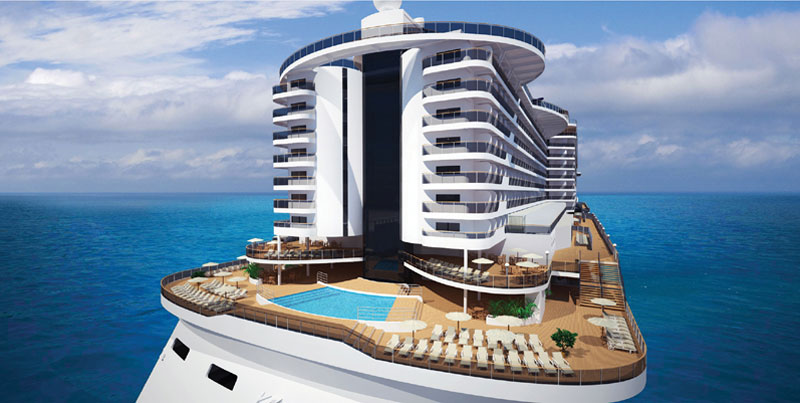 One of the largest and newest cruise ships in the world has crashed into the pier in Palermo, Italy causing damage.
Read more
MSC Cruises

MSC Cruises has celebrated the floating out of MSC Virtuosa at the Chantiers de l’Atlantique shipyard in France.
Read more