During a steel cutting ceremony MSC Cruises has revealed the name of its largest ever cruise ship as MSC Meraviglia.

Known as the “Vista Project” until today the MSC Meraviglia will be the largest ship ever built for a European based cruise line and only Royal Caribbeans Oasis class vessel are bigger when it comes to passenger capacity. The announcement was made during the vessel first steel cutting at the STX France shipyard in Saint-Nazaire. The cutting is a major milestone and begins the physical construction process of the vessel.

At the steel-cutting ceremony, MSC Cruises Executive Chairman Pierfrancesco Vago told assembled press and dignitaries that the cutting-edge 4,500 guest (double occupancy), 167,600 gross ton ship due to be delivered in May 2017 and open for bookings from June 2015 will be named MSC Meraviglia. She will spend her first summer sailing the western Mediterranean, and will be the first to have three homeports: Genoa, Marseille and Barcelona.

“MSC Meraviglia will be the biggest and most innovative cruise ship ever built by a global European-based cruise line,” said Pierfrancesco Vago, MSC Cruises Executive Chairman. “We chose a name that denotes the sense of awe and wonderment felt when you experience the ship’s stunning features, which only an MSC cruise, with its unique Mediterranean-style, can deliver. MSC Meraviglia brings together the industry knowhow of MSC Cruises, a young, bold company built upon 300 years of seafaring tradition and the expertise of one of the most advanced shipyards in the world. Today, building started on a true maritime marvel.”

Some new details have also been released with new specially crafted ‘cluster cabins’ for families, and an extended MSC Yacht Club, the wholly self-contained luxury area on the prestigious foredecks, which will be enhanced with duplex suites, a vast solarium and a private lounge and restaurant. The cabins will give groups the chance to open up 3 cabins into 1 making the experience even better for cruisers. There will also be a large theatre and a spectacular amusement park linked to an outdoor aqua park, as well as a three-deck interior promenade.

STX France General Manager Laurent Castaing added: “Since March 2014, more than 400 people from our various teams have been working tirelessly to define the special features of a ship that, I am certain will set the standard for its generation. This extraordinary project is testament to MSC Cruises’ visionary approach, and we are proud to collaborate with them through our capacity for innovation and know-how.”

The cruise line is also following Royal Caribbean with new technology advancements where guests can use their cruise card, bracelet or smartphone to make onboard payments, access their staterooms or geo-locate children. The main promenade deck that is usually a hive of activity on cruise ships will feature a huge 5,167 square foot LED screen. The screen will cover the entire ceiling displaying breathtaking visuals that will set the atmosphere throughout.

Gianni Onorato, MSC Cruises Chief Executive Officer said: “This steel-cutting event marks a decisive milestone in the company’s development plan, one that will see MSC Cruises double its capacity by 2022 through up to seven new ships and a $5.4 billion investment plan.”

He added: “MSC Meraviglia will be one of the greenest and safest ships in the industry, as well as one of the most technologically advanced. We are thrilled that in just a few weeks guests can start booking this truly remarkable ship, which will bring cruise travellers to the most exciting destinations around the world in outstanding comfort and style.”

The environmentally friendly cruise ship will be the first of two to be built by the shipyard and will take MSC Cruises into the future as one of the worlds fastest growing cruise lines. The 167,600 gross ton MSC Meraviglia will be completed by May 2017 with a second Vista Class ship to enter service in 2019. The cruise line also has an option to build another two Vista class vessels to be delivered by 2022. MSC Cruises also has two new generation Seaside cruise ships that are being built by rival shipbuilder Fincantieri. 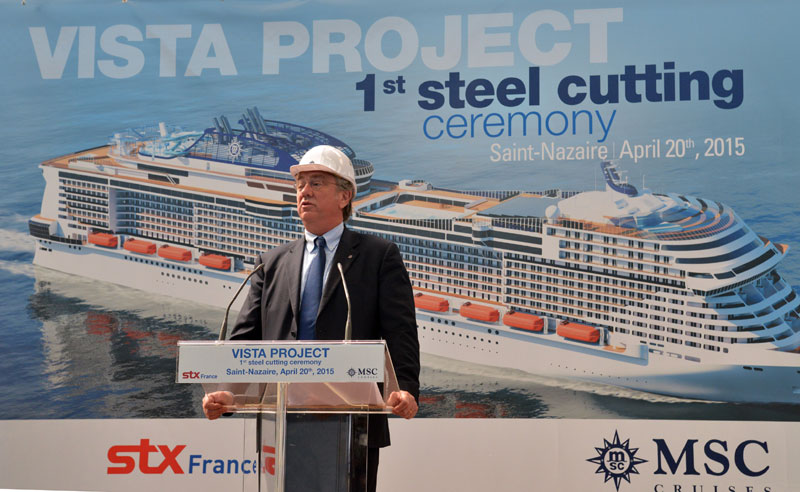