ms Koningsdam Will Homeport In Port Everglades After Inaugural Season

ms Koningsdam will homeport in Port Everglades, Florida in 2016 after its inaugural season in Europe.

Holland America Line have announced that ms Koningsdam will homeport in port Everglades, Fort Lauderdale, Florida and sail Caribbean cruises. this will begin after the new flagship has completed its inaugural season in Europe. The cruises that will also include one to the Bahamas will begin from November 2016 through to March 2017.

“We are excited to sail Holland America Line’s newest ship from Port Everglades on the most varied and robust Caribbean itineraries of any of our ships,” said Orlando Ashford, president of Holland America Line. “The Caribbean remains among the most popular cruise destinations in the world, and by having itineraries that range from four to 11 days guests will be able to enjoy a vacation that fits their schedule.”

Below are the different Caribbean voyages that the ms Koningsdam will offer:

Koningsdam begins its inaugural season in the Caribbean with a four-day cruise to the Bahamas departing Nov. 9, 2016. Following an overnight in Fort Lauderdale, the ship calls at Nassau followed by Half Moon Cay, Holland America Line’s award-winning private island. The voyage is the perfect way to sample Holland America Line’s new Pinnacle-class ship.

For the holidays, the Dec. 23, 2016, departure falls over Christmas, Hanukkah and Kwanzaa, making it the most festive of voyages. The seven-day cruise will visit Grand Turk, San Juan, St. Thomas and Half Moon Cay.

From the turquoise waters of the Dominican Republic to the powdery beaches of the ABC Islands,Koningsdam‘s 10-day itinerary highlights some of the most beautiful ports in the region. Departing Nov. 13 andDec. 4, 2015, and Feb. 19 and March 12, 2016, the cruises call at Half Moon Cay; Grand Turk; the exclusive cruise port of Amber Cove, Dominican Republic; Kralendijk, Bonaire; Willemstand, Curacao; and Oranjestad, Aruba.

The eastern Caribbean takes center stage on the 11-day voyages that depart Nov. 23, 2016, and March 1 and 22, 2017. Koningsdam will visit the ports of Philipsburg; Castries, St. Lucia; Bridgetown, Barbados; Fort-de-France, Martinique; Basseterre; St. Thomas; and Half Moon Cay. Guests aboard also will enjoy scenic cruising in Soufriere Bay and past the famed Mount Pelee volcano.

The inaugural Caribbean season of Koningsdam will be open for booking in April 2015. the ship currently in its final phase of construction at the Fincantieri shipyard in Marghera, Italy. it will be the largest cruise ship built for holland America Line. the first cruise will set sail on April 8th 2016 in Europe. 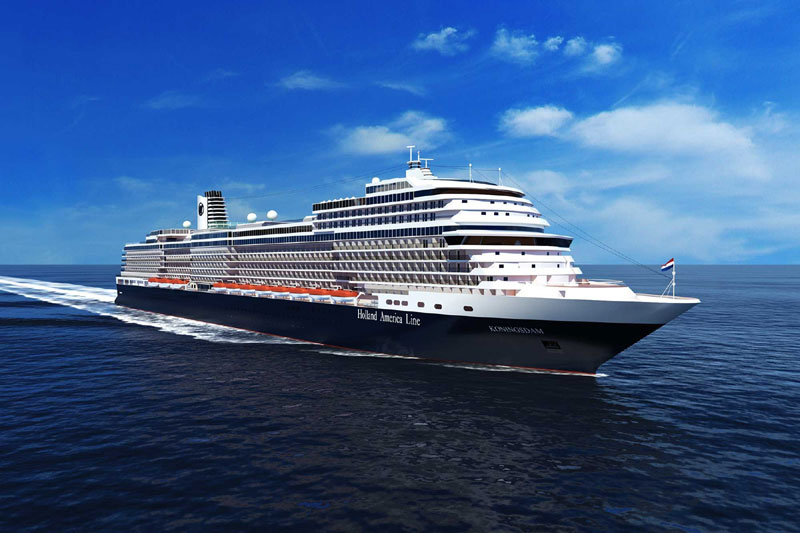