ms Koningsdam To Feature Billboard Onboard

Holland America announced at Cruise Shipping Miami 2015 that the cruise line is teaming up with the Billboard charts.

Holland America Line is using 50 years of chart-topping hits as the framework for a new live interactive music experience called Billboard Onboard that will debut as part of the Music Walk complex on the line’s first Pinnacle-class ship, ms Koningsdam.

Billboard Onboard will showcase the talents of live musicians including two pianists, a guitarist and a DJ who will take turns performing dynamic shows centered around the interesting facts and figures of the music industry as chronicled by Billboard. Between the nightly sets and songs, guests can sing and play along with trivia questions presented on screens throughout the room.

“Our guests love music that spans all genres, and Billboard Onboard is the perfect way to showcase a wide range of popular hits under one roof,” said Orlando Ashford, president of Holland America Line. “We’re thrilled to partner with Billboard to debut a venue that will cater to all ages and nationalities.”

“Billboard is the authoritative voice in the music industry. We are excited to expand our influence to interesting concepts that make sense for the brand,” said John Amato, co-president, Billboard and The Hollywood Reporter. “The inherent trust we have with our audience brings credibility and power to this new music venue and allows artists another platform to share their talents.”

The venue debut is a continuation of the growth the brand has seen in the last year, from a new online layout for its entire slate of renowned weekly charts to the launch of Adapt Studios, a branded content studio alongside The Hollywood Reporter. A chance to bring the Billboard experience to life, Billboard Onboard represents an extension of the brand as it curates venues worldwide. The new Music Walk complex on ms Koningsdam will encompass the ship’s musical offerings and partnerships, including Billboard Onboard, B. B. King’s Blues Club and Lincoln Center Stage.

In addition the cruise line also announced that they are partnering up Lincoln Center for the Performing Arts, a leader in artistic programming, arts and education and community relations.

Under the exclusive partnership, each Lincoln Center Stage will showcase an ensemble performing chamber music. These world-class musicians will perform multiple programs nightly. On those occasions when guests are enjoying a leisurely day at sea aboard ship, the ensemble also will play afternoon recitals.

Lincoln Center Stage will debut on ms Eurodam in January 2016 and on ms Koningsdam as part of the Music Walk complex and on ms Oosterdam in April 2016. Programming on additional ships will be announced at a later date.

ms Koningsdam is a new Pinnacle class vessel for Holland America. The ship is currently being outfitted at the Fincantieri shipyard in Marghera, Italy. The 99,500 gross ton ship will make its debut on April 18th 2016. 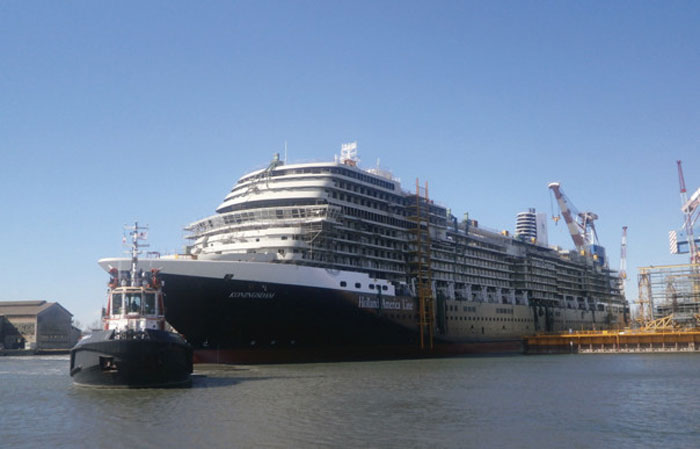