Most Luxury Cruise Ship Ever Built Will Sail Cruises From Miami

Most luxury cruise ship ever built will sail cruises from the cruise capital of the world at the end of 2016 as part of the new ships inaugural Caribbean season.

Seven Seas Explorer which is Regent Seven Seas Cruises next cruise ship will make its Caribbean inaugural debut sailing from Miami, Florida on December 4th 2016. these select voyages will start after the new ships maiden voyages beginning from Monte Carlo on July 20, 2016.

Seven Seas Explorer will embark on a 14-night Serene Islands roundtrip voyage on Dec. 4 followed by a 10-night Caribbean Dawn roundtrip on Dec. 18. Seven Seas Explorer will ring in the New Year with a 16-night Grand Canal Crossing from Miami to Los Angeles with stops throughout the Caribbean and Central America. Before arriving into Miami for the first time the luxury cruise ship will sail 10 destination-rich Mediterranean itineraries and then to North American on a 16-night Atlantic Retreat voyage from Rome.

In addition to the Seven Seas Explorer announcement and part of the last 2016 deployments to be released sister ship Seven Seas Navigator will sail 20 Mediterranean voyages before embarking on a 24-night African Expedition on Oct. 23 which culminates in Cape Town. The ship will continue its exploration of Africa on a 15-night Sumptuous Safaris voyage on Nov. 16 before finishing off the year with an exotic 35-night sailing from Cape Town to Miami. All three African voyages will offer complimentary pre- or post-cruise African Safaris for guests booked in a Concierge Suite or higher.

Seven Seas Explorer will be the cruise lines most luxury ship ever built at 54,000 gross tons. The vessel is under construction by Italian shipbuilder Fincantieri and will be completed in the middle of 2016. 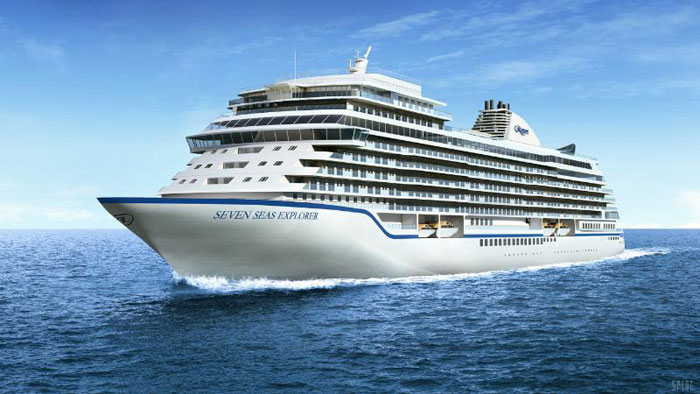